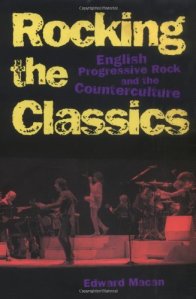 Some of you reading this might be old enough to remember that the actor Steve Martin also made a name for himself as a stand-up comic, releasing two albums of stand-up in the late 1970’s.  On one of those albums, Martin remarked that “talking about music is like dancing about architecture.”  Martin may indeed be a wild and crazy guy, but I must respectfully disagree with him.  After all, what would we be doing here on a blog dedicated to progressive rock if we agreed with him?  Are we not here to have a conversation about prog (and other music as well)?  The only difference is that our conversation here is not in real time, but instead is conducted through the written word.  This brings me to the main topic of this post: books about prog.

My hands-down favorite progressive rock book is ‘Rocking the Classics’ by Edward Macan.  In my opinion, this is a must-read for any dedicated progressive rock fan.  Make no mistake about it though, this is not a fan-boy book, this is a serious critical study of prog.

What is best about Macan’s book is that he treats progressive rock as serious art – in other words, as it should be.  Macan takes an academic point of view in his study of prog, and views it from several different angles – the music itself, the lyrics, the visuals (both album artwork as well as live presentation), and the culture that gave rise to the initial wave of prog.  A more in-depth study of four different works of prog – ELP’s Tarkus, Yes’ Close to the Edge, Genesis’ Firth of Fifth, and Pink Floyd’s Wish You Were Here (the entire album) is also provided.

Finally, Macan delves into related styles, the sociology of prog’s fan base, the critical reception of prog, and closes with a discussion of prog after 1976, as the first wave subsided.  I particularly enjoyed his dissecting of the critics of prog, as I always found it ironic that they, of all people, were labeling prog as pretentious.  As the old saying goes, projection ain’t just a river in Egypt … (it seems I might have garbled the translation here).

My only quibble is that Macan seems to believe that prog had played itself out following the advent of Discipline-era King Crimson and the neo-prog movement of the 80’s.  Perhaps he can be forgiven though, since the internet was relatively new then, and thus like many of us, he was not aware that we were on the cusp of a second and more enduring golden age of prog.  All things considered though, I cannot recommend this book strongly enough to those of you who haven’t read it.

On a different level, there is ‘The Progressive Rock Files’ by Jerry Lucky.  This book is more of a mini-encyclopedia of prog up to the time of its publication (in the case of my copy, 1998, when the fourth edition was published).  Lucky’s book includes a history, discussion of the definition of prog, a discussion of the critics, and then brings the reader up to date (or at least up to 1998!) with the goings-on of prog.  That chapter, along with the listing of prog bands that follows, was the first realization for me that prog wasn’t dead but was actually alive and thriving, if one knew where to look.

Bill Martin’s ‘Music of Yes’ is a book with which I have a love-hate relationship.  The love part is the analysis of Yes music, with its particular focus on ‘the main sequence’ of Yes – ‘The Yes Album’ through ‘Going for the One’.  This is the period where Yes really made their name as one of the leading lights of the first golden age of prog, and thus Martin’s focus on this area is well justified.  The hate part?  Martin far too often lets his own politics work its way into the discussion, and it becomes very annoying.  Agree or disagree with his views, it seems that their insertion into the discussion is often contrived, and where it occurs, it really takes away from the discussion.

Finally (if you’ve made it this far), there is ‘Pink Floyd and Philosophy’.  I am a sucker for the pop culture and philosophy books from two different publishers (Wiley and Open Court Books) – particularly when it a band like Pink Floyd is the focal point (As a quick aside, there is a ‘Rush and Philosophy’ out there now – has anyone picked up a copy yet?).  For those unfamiliar with these books, they are divided into a series of essays, usually about 15-20 or so, by different authors.  While not every essay is a good one, many are more than worth the time and will make you do the same thing that listening to prog does – think.  Among the essays included ‘Pink Floyd and Philosophy’ includes a series on the topic of alienation – a theme that runs through the lyrics of most of Pink Floyd’s work in the 70’s.  That section alone makes it well worth the price of admission.

There are a number of other prog books out there that I haven’t read, including the aforementioned ‘Rush and Philosophy’, ‘Progressive Rock Reconsidered’, and “Beyond and Before – Progressive Rock since the 1960’s.  If any of you reading this have suggestions, you would be doing many of us a great service if you were to further this discussion in the comments.

Did you make it this far?  If so, let’s go put some Frank Lloyd Wright on the stereo and hit the dance floor.

One thought on “Dancing About Architecture”