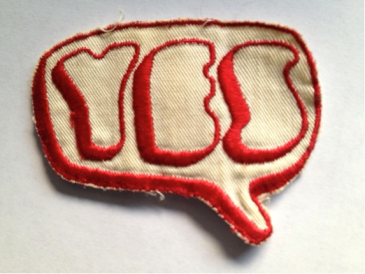 As a sophomore at Lafayette College I became program director of the college radio station, and Larry Fast (Synergy) became the general manager.  We had access to early releases and concert passes in one of the great periods in progressive music.  To generate better distribution for college stations, I published a newsletter called The Rolling Paper that we distributed each month on campus and to all record labels.

We were fortunate to interview our three favorite bands between 1971 and 1973-Yes, Genesis on their first US performance at Lincoln Center, and King Crimson on the second Larks Tongue tour through the Bill Bruford connection with Yes.

We met and interviewed Yes at Dickinson College in 1971.  I had seen Yes the previous summer supporting Jethro Tull ($5) with Tony Kaye and had been blown away by the energy of the band.  By December the Yes album was taking off, and Fragile had arrived that week as an import from Jem Records.  We requested an interview through Atlantic Records, and received a warm welcome from the band members who were delighted that we were holding import copies of Fragile in the US.  For the next several years we were fortunate to have backstage passes to more than 20 Yes shows at area colleges, and later at the big arenas like Madison Square Garden and the Spectrum in Philly during their prime including several shows with Bruford on drums prior to his departure.  We watched the band grow from being third on bills (Yes, King Crimson, Procol Harum ) to headliners for the Close to the Edge through the Tales from Topographic Oceans tour.  Larry built a strong connection with Rick Wakeman through electronics and keyboards, and he went on to build some sequencers for him over the next few years. My connection was forged through and over beer, as Rick and I shared a fondness for brew.  I was but a lightweight while Rick’s consumption of Budweiser was unrivaled and eventually unsustainable.

I thought it would be fun to revisit this interview 40+ years later and have condensed the original piece, but not changed the content.

After introducing myself to Brian Lane, Jon Anderson came over and volunteered to talk about the band.  He said Yes had been in America since November 6, and had been on the road/in the studio for all but three days since August.  “The tour has been good, we are all a bit tired, looking forward to Christmas”.  We discussed Yes’s lack of exposure and press coverage in the States, but Jon’s comment was “ better late than never” .

Yes started about 4 years ago when Jon met Chris, then Bill and both Peter Banks and Tony Kaye joined soon after.  After two good LPs, Banks left to be replaced by Steve Howe, who had been in a group called Tomorrow. “Tomorrow released a very heavy album in 1967, and about a year later I split, and Yes invited me to join”.  The band improved tremendously with the addition of Howe on The Yes album.  In August Tony Kaye left the band. Enter Rick Wakeman, keyboard boy wonder, ex-Strawbs, playing piano, organ, mellotron and synthesizer.  “We wanted more color to our sound”, explained Jon. Those who have heard their new LP ‘Fragile’ can see and hear these colors, and bright ones they are!

Rick has been unhappy with his equipment and performance on the tour.  “I must tell you I think very little of US airlines.  I mean you tell the guy your equipment is fragile, you paint it on the case and even offer to help the guy carry it, and the ass drops my mellotron.  They have dropped Steve’s guitars and screwed my stuff up terribly”.  Wakeman feels bad that several concerts have been plagued by equipment and sound problems.  He also has been somewhat unsure of himself until a few gigs ago.  “Now I feel very confident with the band”.  With a child expected any day now, he’s had a tendency to let his mind wander back home to England.

[Ed. note:  Sound problems plagued most concerts in the early 70’s, but especially for those bands using organ, piano, mellotrons and synthesizers.  Vocals were also not always clear.  It is easy to forget how challenging the technology was in those days.]

Speaking about other music the band likes, Jon has been listening to Shaft and the classics, Chris likes Sly and the Family Stone and just about any kind of music.  Chris was the mellow band member that day, tired and quiet, but most interested in what people in America thought of Yes.

Before the tour The Yes Album had sold 54,000 copies in the US and in the past 8 days it had sold 100,000 with the release of Your Move as a single. Jon commented “Any song can be a single if you do it right-we make albums.  When we spoke of successful bands and the pitfalls of that success, Jon said “We will never sell out to success.  We will keep doing things the way we always have, hopefully better, but if not we stop playing.  On Time and A Word, I was very much into the peace thing, but we were not very good yet so we used strings to fill in the sound.  Now with the addition of Rick and Steve, I’d like to be touring even when I am 60 (he was 27).  I am happy singing in this band and I feel quite lucky I can sing for a living.  I think you should always play live before the fans-they are who you are playing for.  All I know how to do is sing, so there is no reason for me not to.  And I think you have to do something to make you happy, and if you are unhappy you need to change that.

Bill Bruford is an excellent percussionist, and was also down on the sound problems.  “I mean, when was the last time our sound was good on stage?”   The roadie responded “Cincinnati, and by the way William, the sound is fine until the musicians walk on the stage”.  Bruford responded with an old sock to his face.

Back to Wakeman, he has often been compared to Keith Emerson but equipment problems have plagued one or both when their respective groups have been billed together, so there was no ‘showdown’.  ”Keith is a fantastic guy and a very dear friend.  His saving grace was the Moog, which he learned to play from Dr. Moog himself.  I don’t think we can be compared:, ELP is a solo band with Keith doing most of the work, but Yes is a group effort:  the band is more important than any one person.”  Rick’s name keeps popping up on album covers these days-Cat Stevens, Elton John, David Bowie, Ralph McTell) and he is still in great demand for session work.  Wakeman was glad to hear of nice reviews for Ralph McTell-‘Ralph is a fine guy and I am very happy for him.  He deserves his success”.  Rick also asked to thank A&M records on this sheet and is staying with them rather than Atlantic (Yes’s label) because he feels he owes them so much.  So A&M Records, Rick thanks you for the support. He has begun work on a solo album to be recorded in January, and has done enough sessions to know who he wants when. “It has been forming in my head little by little to the point that the wholdealbum is pretty clear to me right now”.  Rick seems supremely excited about being in Yes.  “They are all so fantastically creative, and it is a joy to play with them.  When we return to America in February we will show how good we really are”.

Inside reports (Melody Maker, etc) make reference to Yes being the best band in England and their concert at Dickinson supports that claim.  Yes is indeed a magic band.  Their music is a 3-D color show of wonderful music-warm hues, bright day-glows, hot colors (as Jon sings).  Vivid scenes and beautiful stories come to mind with Yes,-a chapter of a life being played before you in musical images.  If you’ve never seen them, they will be back in March for a 5 week tour to support the US release of Fragile.  Listen to their LPs, go see them, watch for Fragile.  Magic music, magic band.

Postscript-I Get Up I Get Down

It’s been over 40 years since this interview, and the boys are still playing into their late 60’s, just not in predictable combinations.  Chris Squire has been the only constant in the several eras of Yes-the Kaye/Banks years, Wakeman years, the short Patrick Moraz period, the Trevor Rabin years, the Union tour with the conglomerate of all players, the Billy Sherwood years, and now the no Anderson iterations, featuring singers sounding much like Jon Anderson.

I think Yes generates more passion and vitriolic posts than any other band on progressive sites.  People beg them to ‘give it all up’ and ride off into the sunset, re-form with Jon Anderson, carry on, or release more new music,.  Many deride the personnel changes and call for an Anderson reunion.  Yes has survived bad management, fortunes earned and lost, scathing criticism from reviewers, rejection by the Rock and Roll Hall of Fame and their constantly changing line up.  But who is to say that is a bad thing?  Being in a band is like being married to many people.  Add in the stress of needing to continually be creative, the financial and artistic pressures of record labels and the physical and mental stress of constantly touring and being away from families, and it is easy to understand why there are breakups and personnel changes.

Yes has been one of the iconic progressive bands and deserve to carry on in any way they see fit.  We may not always like what they choose to do, and their output over the past 10 years has been minimal, and largely uninteresting.  But they continue to tour and energize audiences of new progressive music fans as well as those of us who were around in the early days.  If we choose to not support them, that is a personal decision, but I certainly wish them well for as long as they are able to perform, playing the music they have created and refined over the past 40 years.  I will never forget the first time I heard Heart of the Sunrise or And You and I, some of the most magical music moments of my life. My music landscape might have been a barren space without Yes and I will forever appreciate their contributions to progressive music.