The first Rush album I bought was A Farewell To Kings – it was a cutout*, and I had heard they were a pretty good progressive rock trio. Geddy’s vocals turned me off initially, but Neil’s lyrics were very intriguing. The next album I acquired was Permanent Waves, because “Spirit of Radio” was all over the radio, and Geddy’s voice had mellowed a bit. That album remained in permanent rotation on my dorm room’s turntable for months, and I still listen to it often. Moving Pictures upped the ante even more, and Rush were becoming one of my all-time favorite bands. However, to my ears Signals was a letdown – the pervasive whoosh of synthesizers seemed to overwhelm Alex’s guitars, and the melodies weren’t as memorable as those in Moving Pictures. So I skipped Grace Under Pressure, convinced that Rush’s best days were behind them in the Permanent Waves/ Moving Pictures era. (In case you’re inclined to quit reading, in disgust at my ignorance of the greatness of Grace Under Pressure, I did eventually get it!)

In the mid-‘80s, I worked in record store, and we prided ourselves on listening to the cutting edge of everything new wave and postpunk: Cocteau Twins, The The, Simple Minds, The Smiths, R.E.M., The Cure, Talk Talk, etc. One day, our import buyer (who was the hippest employee in the store) was very excited, because it was the release date for Rush’s new album, Power Windows. I was surprised, to say the least, because Rush was not cool, like a 4AD band automatically was. But when he put it on the store’s sound system, and those glorious “Big Money” power chords poured out of the speakers, I was hooked. Rush was back! I played the cassette in my car constantly, and when the compact disc came out, I immediately got a copy. Power Windows was the first and only album of which I owned the cassette, the Lp, and the CD.

Which is my long-winded way of setting the stage for when I first encountered Hold Your Fire. The day before the official release date, I unpacked the box in which our store’s copies were packed, and gazed in admiration at the cover: 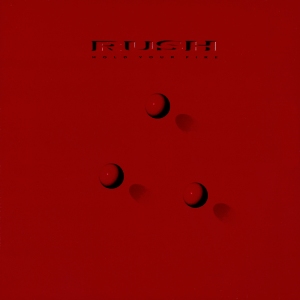 This was something unprecedented in Rush album cover art – instead of a meticulously detailed Hugh Syme painting containing visual puns, there were just three red spheres suspended over a red background. The obvious conclusion was that Alex, Geddy, and Neil were now reduced to the simplest, most perfect solid in geometry – polished and ready to bounce off of each other like billiard balls. Visually, at least, Hold Your Fire was sleek and minimalist. Peter Collins, who produced Power Windows, was back in the saddle, which boded well. I couldn’t wait to hear the music.

Inside the booklet, there was a spread that was more like what Rush fans expected: a man juggled three flaming balls (hold your fire, indeed), the building behind him vaguely resembled the façade in the Moving Pictures cover, in one of the windows you could make out the three vintage television sets from Power Windows, on the sidewalk stood the red fire hydrant from Signals, and the Chinese restaurant’s clock read 21:12 in military time (it turns out the restaurant’s sign reads Tai Shan, as well).

The first track, “Force Ten”, opens with a bone-rattling jackhammer and sampled choir, quickly followed by a straight-ahead drumbeat while the bassline leaps and bounds. Alex’s guitar is punk-like in its simplistic riffing – this is one of the most aggressive songs Rush has written up to this point in their career. Which makes the second track such a surprise. “Time Stand Still” features Aimee Mann, leader of the pop group ‘Til Tuesday, on vocals. Aimee Mann?? Once the shock of hearing someone besides Geddy sing on a Rush song, it’s clear this is actually a nicely constructed, interesting tune. Alex’s arpeggiated, brittle guitar sound is great in this context, and “Time Stand Still” stands the test of time as one of Rush’s most radio-friendly tunes. Neil’s wistful lyrics are very touching:

“Open Secrets” is a bass/synthesizer dominated song with Alex providing some tasteful guitar filigrees as Geddy sings about how true communication is difficult between two people, due to their reluctance to be open and honest. As a matter of fact, the entire album’s theme is one of restraint. Where Power Windows was about power and the use of it, Hold Your Fire is about controlling that power – exercising restraint, in other words.

“Second Nature” begins with a nice keyboard riff, and slowly builds in intensity. Neil’s drums are excellent on this track, as he lends a touch of exotic rhythm to it. The song has a laconic pace to it, with lots of swirling synthesizer washes throughout.

Things definitely pick up in “Prime Mover”, which features some of Geddy’s finest bass work ever. In the same way New Order’s bassist Peter Hook often plays lead, Geddy carries this tune while Neil and Alex play over, under, and around him. This one of the strongest tracks on the album, and it benefits from a nice balance of keyboards vs. guitar/bass/drums.

“Lock and Key” was the first single off the album, and it’s a very good track. [Update: a Progarchy reader has informed me that “Force Ten” is actually the first single off of HYF. Thanks, Will!] Alex gets to rock out with some fat power chords and a fine solo, while Neil really shines on drums. This track will give your subwoofer a workout! The lyrics deal with how everyone keeps their “real” feelings under lock and key, in order to maintain civility:

“Mission” contains the album title: “Hold your fire/Keep it burning bright/Hold the flame/’Til the flame ignites/A spirit with a vision/Is a dream with a mission.” Not one of my favorite tracks, but it is still an enjoyable listen.

“Turn the Page” is a whole ‘nother matter, though! This song is one of the best Alex, Geddy, and Neil have ever recorded. An unaccompanied bass riff starts things off, until Alex enters with some slashing guitar, and Neil lays down a rapid pulse. When the chorus begins, there is an atmosphere of time being suspended as Neil hits every other beat, then suddenly kicks it into overdrive with his patented bass pedal and cross-rhythmic work. After Alex’s solo, a stomach-churning bass synth explodes (at the 3:43 mark), and there is a mad dash to the end.

“Tai Shan” is an oddity – it has a too-obvious Asian influence musically, and the lyrics concern a fabled mountain in China where supposedly you are granted long life if you reach the top and raise your arms. It doesn’t exactly fit the tone of the rest of the album, though.

“High Water” closes things out on a relatively subdued note. A fitting conclusion to an album full of dynamic contrasts. By 1987, compact discs had become popular enough that Geddy, Alex, and Neil no longer felt constrained by vinyl’s time limitations. Hence, Hold Your Fire clocks in at a generous 50:30 minutes. It was followed by their third live album, A Show Of Hands. The DVD of that album is available as part of the Replay set, and it is an excellent summary of Rush’s “Synthesizer Period”. The Hold Your Fire tour was the first time I saw Rush live, so it holds a special place in my journey with Rush. 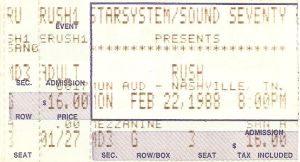 After A Show Of Hands, Rush left their longtime label, Mercury, and signed to Atlantic. They eventually scaled back the keyboards, and returned to a more guitar-based sound. Hold Your Fire was the culmination of elements they had been developing since Signals, and they wisely stepped back from going down a synth-heavy pop/rock path.

Do I believe Hold Your Fire to be Rush’s finest album? No, I give that honor to Permanent Waves. However, I don’t think Hold Your Fire has ever gotten the respect it deserves. Rush plays relatively few songs from it on their tours, and it peaked at #13 on the charts when it was released. If listened to in conjunction with Power Windows, it completes what that album began. Enough time has passed to listen to it with fresh ears, and we can appreciate it for what it is: a successful attempt to craft a radio-friendly album filled with accessible songs. Sometimes you just have to have some fun!

* For our younger readers, a cutout was an Lp that the label deeply discounted because the title was overstocked. The label would cut a notch in the cover, and stores would sell it for 70% – 80% off the retail price.

“Turn The Page”, from A Show Of Hands:

[Ed. note–Tad’s is the first in a series of posts celebrating the fortieth anniversary of our beloved Rush]

For more from Progarchy on Rush

A review of A Farewell to Kings by Kevin McCormick

A review of Power Windows by Brad Birzer

A review of Vapor Trails Remixed by Birzer

A review of Grace Under Pressure by Birzer

49 thoughts on “Rush’s Finest Album? (Hold Your Fire until you’ve read my analysis!)”