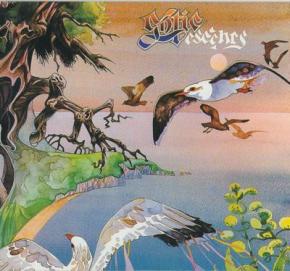 The ninth band featured in this series hails from the land of monstrous windmills, otherwise known as Spain.  Gotic, the brainchild of Catalonian flautist Jep Nuix, released one album, the instrumental Escenes, in 1977.  Escenes benefits from a wonderful mix of keys and flute, which drive all of the songs.  The pastoral cover of the album reminds me of the fantasy landscapes of Roger Dean.  The album is not very long: there are seven songs, all of which but one are under 6 minutes in length.  There are four that I find especially pleasing to the ear:

Imprompt 1: the second song is up-tempo compared to most of the other pieces, with solid, fast paced drumming and a brief guitar solo.

La Revolucio: the fourth song is probably the heaviest piece (the songs are no heavier than any of Camel’s works) with solid bass throughout and, about halfway through, a brief fife and drum duet.

Historia d’Una Gota d’Agua: the final song on the album and also the longest (about 10 minutes in length); opens with beautiful classical guitar and flute which, combined with piano, make this song a relaxing listen.

Escenes is most certainly worth a listen, especially if you enjoy softer prog with a jazz feel to it. You won’t regret it.