The number “50” is off—an 18-year-old Van the Man actually joined Them in April 1964 (thus, 51 years on)—but it’s fitting, as playing with time is something Morrison mastered early and continues to do very well, as singer,

songwriter, and player. In 1966, Morrison and Them performed a series of shows at the Whisky a Go Go; the opening band was The Doors, and the two Morrisons—Jim and Van—performed together. On his new release (his 35th studio album), Duets: Re-working the Catalogue, the Belfast Cowboy performs with several singers who were born after the Sixties: Joss Stone, Michael Bublé, Clare Teal, Gregory Porter, Morrison’s daughter, Shana. Many of the other guests have been there and done that, including Bobby Womack (who died last summer), Mavis Staples, George Benson, Steve Winwood, PJ Proby, Taj Mahal, Mick Hucknall, Natalie Cole, Georgie Fame, and Chris Farlowe.

Those sixteen duet partners encompass blues, jazz, blue-eyed soul, rock, R&B, gospel, and pop, all of which are genres that Morrison mastered long ago, in addition to Celtic, country, and skiffle. No, there’s not a lick of prog on this or any other Morrison album, but there is, I suggest, a certain spiritual connection with certain forms of progressive rock, especially in the mystical journeying of Astral Weeks, the joyful, ecstatic visions of Moondance, and the epic, spiritual wanderlust of Avalon Sunset and Hymns to the Silence. Part of the genius of Van Morrison is that he largely ignores prevailing musical trends, yet is able to connect to a wide range of listeners because of a certain timeless quality to his songs, which are consistently melodic and memorable. My first real initiation into Morrison’s music was in the summer of 1991, when a friend played Avalon Sunset for me; I was instantly hooked, and quickly began acquiring all of Morrison’s music. In my 2002 essay, “The Incarnational Art of Van Morrison,” I reflect on the various spiritual and mystical themes in Morrison’s music.

That said, I was unsure of what to expect with this new album for the simple reason that I almost never like duet albums. With only a few exceptions, they tend to sound forced, dull, detached, generic, and sterile. I own over 1200 songs by Frank Sinatra, but I refuse to buy or listen to his “Duet” albums, which sold very well but received generally mediocre to miserable reviews; I fear that I would regret listening to them and so avoid them like the plague. However, while Sinatra cut those albums near the end of his public career and with his voice in shambles (and without apparently being in the same studio as his duet partners), Morrison, at the age of 69, has demonstrated both a fine voice and a strong creative reserve in recent years, notably in his critically-acclaimed 2012 album, Born To Sing: No Plan B, which was 60 minutes of tight, focused, feisty, and infectious music.

My basic take on Duets is that Morrison fans, such as myself, will be fairly satisfied to very happy, while those who come to the album cold will probably leave chilly. That’s not a criticism of the music or playing, which are excellent to exceptional; rather, this isn’t the best place to start with Morrison. And, ironically, one of the great positives of this album, for me, is probably a serious drawback to the casual fan: the album does not contain versions of any of Morrison’s hits or best-known songs. For example, I’m guessing that very few people can instantly name the album that “Streets of Arklow” first appeared on, but I was thrilled to see a cut from 1974’s Veedon Fleece, which is something of a forgotten masterpiece, a sprawling, deeply personal work that marries the mystical flights of Astral Weeks with a Celtic-tinged restlessness. Simply Red’s Hucknall turns in a fine performance, and that song is a highlight for me.

“Carrying a Torch,” one of my favorite songs from the outstanding 1991 double album, Hymns To the Silence, is probably my favorite of this bunch, with Morrison’s sinewy baritone matched perfectly with Clare Teal’s gorgeous jazz vocals, set against a swelling arrangement that (thankfully) avoid falling into the “lush” category. That is followed by an energetic version of “The Eternal Kansas City” (from 1977’s A Period of Transition), with rising star Porter, featuring a sizzling trumpet solo by Paul Moran. Joss Stone is in fine voice on “Wild Honey,” but sounds a bit lost in the second half of the cut, and Michael Bublé is his smooth, generic self on “Real Real Gone”, managing to rob the song of much of its original urgency. Both Winwood and Knopfler register strong efforts, with Winwood laying down some Hammond organ licks on “Fire In the Belly” and Knopfler tossing in some understated vocals and tasteful 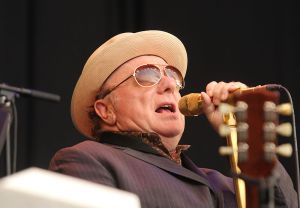 My other gripe about most duet albums is that they often come off as a money-making enterprise, trying to appeal to a wide range of listeners and thus usually robbing the music of much character or substance. While Duets is not a classic, it avoids that pitfall; in fact, is sounds remarkably cohesive over its nearly 80 minutes, due to Morrison’s distinct vocals, his stellar songwriting, and the excellent arrangements. There are no gimmicks here: just good to great songs performed by good to great artists, resulting in another worthy addition to Van Morrison’s remarkable discography.

2 thoughts on “50 years after Them, Van Morrison cuts one of Those “Duets” Albums”