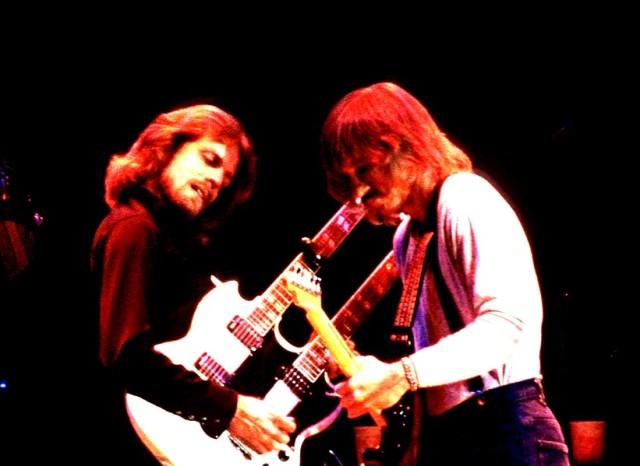 The dark end of late 70s rock culture makes for strange bedfellows on the weekly infinite linear mixtape.  One week after Judas Priest released Unleashed in the East in September 1979, a career milestone kickstarting broad commercial success, the Eagles issued The Long Run, a (mostly) career-ending album that took too long to make, wore on too many nerves in a group of too many egos, and while feeling generally sapped of energy was still a giant hit.  Go figure.  They were a beloved band at the end of their (Seven Bridges) road.  But while the album may not have been as strong as its predecessor, 1976’s Hotel California, pieces of it shared qualities with those other California-centric, dark star rock albums of the era, Fleetwood Mac’s Rumours (1977) and Steely Dan’s Gaucho (1980).  The party goes unexpectedly wrong, and as night sets in the sparks that fly leave an even darker fringe.

The Long Run’s spark is “Those Shoes.”  As an airtight funk backs a story parallel to Judas Priest’s “Victim of Changes” — delivered with icy remove by Don Henley — Joe Walsh and Don Felder twine their talk-boxed guitars together in a dual attack as hard-hitting, in its way, as anything delivered by K.K. Downing and Glenn Tipton.  It’s the swing of it, still in the late 70s a rock’n’roll staple embraced by blues to punk, country to metal, and too soon largely abandoned by the harder end of rock, that moves both songs forward.  Just as Priest’s rhythm section, with Les Binks drumming, made you pump your fist and shake your butt, when the Eagles got down to business they were masters of the hard groove.  But this is no good times, party-on disco boogie.  The song’s power is multiplied by its downer lyric, a troubling view of the predator-prey club hookup scene, ringing at once with compassion, cynical chauvinism, and studious intention.  If it’s revealing of the seamier side of the west coast lifestyle as the 70s limped to an end, in it also is the last flash of a band who commanded the era.

2 thoughts on “soundstreamsunday #101: “Those Shoes” by the Eagles”