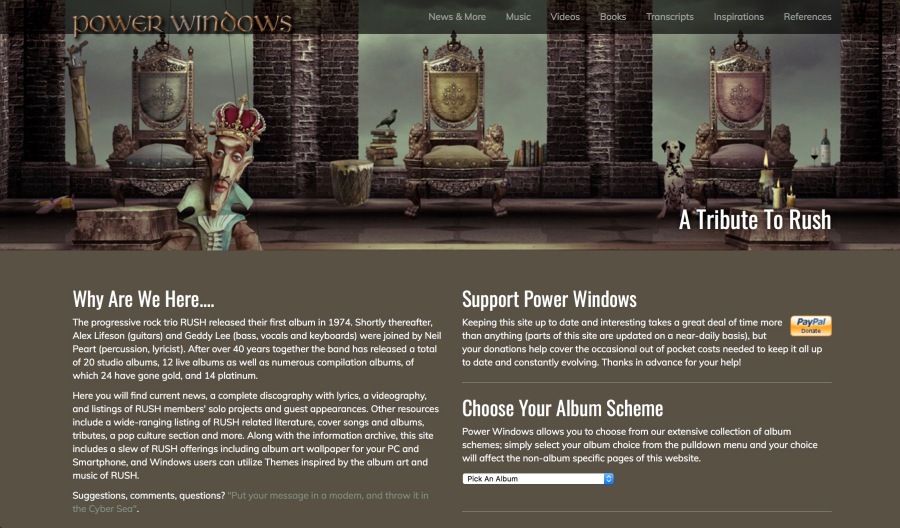 If you’ve had a chance to look at our blog roll, you’ll see a couple of Rush sites.  In particular, I’d like to point out RUSHISABAND and POWERWINDOWS.  Let me just be blunt–I think the world of these sites.  I love the spirit they bring to the internet, and I deeply admire the men (Ed Stenger and Eric Hansen, respectively) who run each.

When we–Carl, Chris, and Kevin–founded progarchy back in 2012, I (Brad) really had three sites in mind to emulate: the Dutch Progressive Rock Page, Rush is a Band, and Power Windows.

Frankly, I wanted to do for Big Big Train what the latter two have done for Rush.

I also have to note that when I wrote my biographical essay on Neil Peart for Kevin J. Anderson’s majestic WordFire Press, I relied significantly on the work of Stenger and Hansen.

Even if you’re not a fan of Rush, how can you not admire what these guys do?  They keep things alive and fresh, now six years after Rush released its last studio album.

Anyway, before I get too sappy and un-Peart-like, let me just say a huge thank you to Ed and Eric for being inspirations.

If you’d like a more in-depth progarchy look at Rush, here’s a handy guide:

The Saving Grace of Neil Peart – Essay by Brad Birzer

One thought on “Rush on the Web: “Rush is a Band” and “Power Windows””