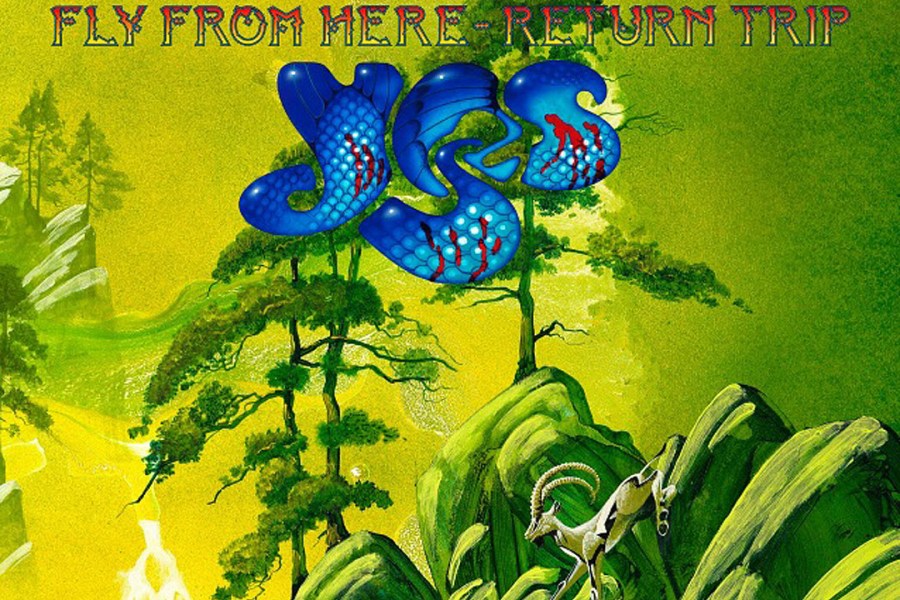 Review of Yes, FLY FROM HERE: RETURN TRIP (Pledgemusic, 2018). Tracks: Fly From Here, Parts 0-V; The Man You Always Wanted Me to Be; Life on a Film Set; Hour of Need; Solitaire; Don’t Take No For an Answer; and Into the Storm.

Standout tracks: Madman at the Screen; Into the Storm.

Sailor, sailor beware.  There are storm clouds.  You must take care.

When I first saw the notice that Yes would be re-releasing its 2011 album, FLY FROM HERE, with a remaster and remix by Trevor Horn and with all main vocals provided by  the very same Trevor Horn, I was surprised and a bit skeptical.  Fake news?  Well, there seems to be a lot of that going around these days in the western world.

And, it turned out. . . it was real news.  After I realized this thing was real, I immediately jumped onto Pledgemusic and, well, pledged.

I’ve never hidden my love of Yes’s 1980 prog new-wave masterpiece, DRAMA.  Kevin McCormick (also a fine citizen of progarchy) and I used to talk late into the night about the virtues of DRAMA back in our college days.  How many hours were devoted to DRAMA?  I have no idea, but they were considerable and meaningful.

The only persons who could rival Horn as master of the rare and very temporally specific prog new-wave movement of 1980-1982 would probably be Rupert Hine or Terry Brown.

Horn makes everything just a bit more magical.  Think Frankie Goes to Hollywood, Seal, Art of Noise, or even his cinematic work with Hans Zimmer.  The guy is an out-and out-audiophilic genius.

After receiving a review copy of FLY FROM HERE-RETURN TRIP, I’ve done very little but listen to the album–over and over again–as I grade midterms and papers.  Believe me, it’s far better for the students that I grade listening to Yes.  Imagine what I’m like when I grade listening to Pink Floyd.  Anyway, I’ve listened to the new Yes album at least six or seven times over the past two days.

I can’t quite express what this new version of the album means to me, but it means a great deal.  When the album first came out in 2011, I was disappointed.  It seemed tinny and a bit rinky-dink.  DRAMA had so much heft and gravitas to it that I thought a followup–even several decades later–had to have as much heft.  Given what Big Big Train, Glass Hammer, and The Tangent were producing in the first years of this past decade, FLY FROM HERE seemed unimpressive.  I know that our very own beloved Alison almost broke with Yes over the album.  Though I’m not quite the Yeshead that she is, I understand her frustrations.

FLY FROM HERE-RETURN TRIP feels like an altogether different album from that original, seven years ago.  This feel fresh, and it has certainly wrapped itself around my soul.

Side one–the “Fly From Here” side–just seems right.  I can hear elements of DRAMA, but, more importantly, I can hear the art that still resides in every member of Yes as of this decade.  Howe, Downes, White, and Squire were in top form in 2011, but the album–at least with Benoit’s voice (nothing against Benoit!)–seemed flat.

Horn’s new vocals make all the difference.  They make this truly a Yes album, a work of art in its best and highest sense.

C.S. Lewis once argued the real friendship is the least jealous of loves.  Person A can bring something out in Person B that Person C cannot.  But, Person C can bring out things from Person A that Person B cannot.  After hearing Horn’s vocals, I believe what Lewis said about friendship allies to Yes as a group.  This new version is really spectacular and really coherent and cohesive.

The best track of side one is Fly From Here: Part III: Madman at the Screen.  Horn’s vocals are everything one would expect from Horn–the oddly precise and percussive high tones of the Buggles–perfectly presented in prog glory.

Horn’s vocals on this track mix so perfectly with every instrument and member of Yes.  Yes, right her and right now.  This is truly perfected Yes.

I don’t want to suggest the album is perfect, but it’s certainly moved in that direction.  The copy I have has a very distorted track 5–Howe’s bizarre “bumpy ride.”  I can’t judge it completely because this version is so choppy, but I suspect that this track will always be cold and alien to me.  I understand that Howe is trying to give us a flight gone wrong, with turbulence, and bugs bombarding the plane, but it still seems too forced, especially with how organic the newly redone overture and parts I-IV are.

Track 7, “The Man You Always Wanted Me to Be,” still feels a bit too AORish for my tastes, but it’s certainly not a bad song.

“Life on a Film Set,” Track 8, works wonderfully, though.  “All the poems of my neighbors. . .” A timeless song loaded with meaning and purpose.

Though most reviewers will understandably be most interested in the “Fly From Here” side of the album, the ninth song, “Hour of Need,” is one of the best Yes has ever written, and almost completely redone for this FLY FROM HERE-RETURN TRIP.  Think “Changes” from 90125–a song wrapped in a song.  This version is infinitely better than the original which really lacked originality.  No longer.

The added track, “Don’t Take No For An Answer,” does little for me, but mostly because I don’t really like the vocal work.  I’m not sure who is singing on this one.  It’s not a terrible track, and it has a good 90125 feel to it.  I’ll need to give this one more time before judging it at any great length.

The final track, “Into the Storm,” ends the album on a peppy and high note.  It has a bit of a BIG GENERATOR feel, but far more restrained and tasteful.  Indeed, if I had to compare it to one previous Yes track, I would compare it to “The Silent Wings of Freedom” in its expression and grace.  The Yes vocal harmonies really shine on this track, as do the interplay of Howe’s guitar(s) and Squire’s bass.  The title as well as the lyrics allow this concluding track to end the album faithfully and true to its theme of flight and adventure.  Dare, I write, not just an adventure, but a DRAMA.  This is actually one of the best tracks of the album, and one of the best Yes tracks of all time.

And, if you’re counting–that makes two stunning Yes tracks on this album: “Fly From Here Part III: Madman at the Screen” and “Into the Storm.”

Armies of angels are starting to fall

Bathed in the light of the break of the dawn.

Armies of angels are leading me on

Take me away from the heart of the storm.

And, when Howe and Squire play their hearts out for the last two minutes of the track with Horn quietly singing “And we can fly from here. . . ” well, my soul soars.

For what it’s worth, I’ve not been this excited about Yes since I first heard the stunning segue on tracks 1 and 2 of MAGNIFICATION, a decade and a half ago.

FLY FROM HERE-RETURN TRIP is not just a good Yes album, it’s a great album and an excellent addition to the prog world of 2018.

Yes, mythic and Yes-ish enough for me.  No doubt.

Once again, Trevor Horn brings excellence and class to our little corner of the rock world.  Amen, Mr. Horn.  Amen.