Setlist: Acid Raid, Vale of Tears, Reality Dream I, Lament, Saturate Me (instrumental intro only), Out of Myself, Second Life Syndrome (first part only), Left Out, Guardian Angel, Lost (Why Should I Be Frightened By a Hat?), The Struggle for Survival, Egoist Hedonist (without third part, extended second part), Wasteland

Last night I saw Riverside for the first time. If I can help it, it won’t be the last. Wow. You don’t really get an appreciation for how good these guys are until you see them live. For me, there wasn’t a single moment of disappointment during this show. From the setlist to the performance to the crowd, everything was exceptional. They deserve to be playing much larger venues here in the United States.

The show opened with Australian heavy metal band, Contrive. Contrive are a two-man group comprised of identical twin brothers. Both were great, and the drummer was particularly exceptional. The guitarist was quite good too, mixing many different styles throughout their hour-long opening set, including a few seconds of Hackett-esque tones. Opening bands can be hit or miss, but they did a good job of warming up the crowd for Riverside. They even started a few minutes before the stated showtime, which was nice since the 8pm start time on a Sunday evening with work the next day was already a bit much.

I’ve never seen a road crew break down and get ready for the main attraction so quickly. Everything was already set up for Riverside, but they had to take down all the gear from Contrive – and they did that and got everything ready for Riverside in less than 10 minutes. It was entertaining just to watch that.

Riverside didn’t waste any time getting into it, starting out with “Acid Rain” from Wasteland. Within seconds I learned something I had never realized about Riverside – Mariusz Duda’s bass drives the show. I originally thought the driving riff on “Acid Rain” was from a guitar. Nope. All bass. I didn’t realize he was that good. I had a blast watching him play the whole night. I’ve seen John Myung live (probably the most acclaimed bassist I’ve seen live), and I’d say that Duda’s performance matched or surpassed that. At some points during the show, he was strumming one of his three or four bass guitars. Who the heck does that? The mighty Duda, that’s who. Maybe this is old news to most of you who have been listening to them for years, but allow me as a relatively new fan (I didn’t start listening to them until after Piotr Grudziński passed away) to gush over how great Riverside is.

I was standing right down in front the whole time next to the speakers (so glad I brought ear plugs) and in front of keyboardist Michał Łapaj. He clearly enjoys his work. He was all smiles most of the show, and his joy was contagious. He also had what appeared to be an analog Leslie speaker that he ran his organ through. You don’t see those often these days, and I’m sure it is a valuable piece of equipment. It really makes a difference in the sound quality of his organ. I was impressed. His playing adds a wonderful depth and complexity to the band’s music, and even with the heaviness of the guitars, bass, and drums, his organ and piano stood out.

Duda makes for a great frontman. He maintains a generally stoic facial expression most of the time, but that doesn’t stop him from getting into the music with every ounce of his being. He is focused and determined. While watching him play with his pedals to ensure the sound was just right, I felt like I was watching a master artist fiddle with his paint palette. Watching his fingers blister through the

songs amazed me, especially as he played several different styles of bass playing. The sounds he can coax out of a bass guitar are quite remarkable. I don’t know of any reason why he shouldn’t be considered one of the top bassists in the world. Vocally, he was perfect the whole night. I don’t remember him missing anything, including during the spaghetti western-influenced section with the high-pitched coyote yowl during “Wasteland.”

Piotr Kozieradzki on drums was very good, but I didn’t really realize before that he is much more of a traditional prog drummer than he is a metal drummer. Riverside gets its grit primarily from the bass and guitar. The result is a unique form of metal that works in both the sedate and heavy moments. I think his style of drumming may be the secret to how the band shifts from quiet to heavy in the same songs so effortlessly.

Maciej Meller was fantastic on guitar. He did a great job honoring Piotr’s memory through his playing. He looks like Ross Jennings’ twin, so that threw me off at first. “What a minute, what band am I about to see?!” Ha.

The crowd was great at this show. Duda quizzed us on where we were from, and at least 1/3 of the audience was actually from Poland. It was pretty cool to be at a concert with fans from all age brackets, rather than just 60 years old and up at most prog concerts or 30 years old and younger at prog metal shows. Riverside seem to attract prog fans of all ages.

Duda humorously asked us what kind of crowd we were going to be, since he noticed a pattern during this North American tour. We had three options:

I think we were a #1 crowd. I always seem to meet interesting people at prog concerts, and last night didn’t disappoint. I met a dude from northwest Indiana who hosts a weekly progressive rock radio show called the Portal on an FM radio station! I didn’t know such a thing still existed in America. If you’re in the Valparaiso area, tune in on Thursdays from 4-7PM (replayed 9-noon on Sundays) on WVLP 103.1 FM. You can stream the station here: https://tunein.com/radio/WVLP-LP-1031-s39101/.

Duda said he hoped that their performance would leave us all happier for having heard their music. He commented on how divided his own country of Poland is right now, to which someone shouted back “we know the feeling.” Duda said the best part of Riverside’s music is you can set all that aside and find unity in enjoying their music. I couldn’t agree more.

I’m not sure I’ve ever enjoyed a concert more than this one. Even though this was at a little hole in the wall place that only fit several hundred people, the performance was so great and Riverside’s music goes straight to the soul. I’ve certainly never had a better view at a show before – and to be right up front at a show put on by contemporary legends of progressive rock and metal – what a treat! The band sounded just like their albums, and Duda’s interactions with the audience kept us interested and engaged. If you get a chance to see Riverside on this tour, do it. They were exceptional, and my ticket only cost $25 – the bargain of the year to be sure.

Click here for a selection of seemingly professional photos taken at this show. 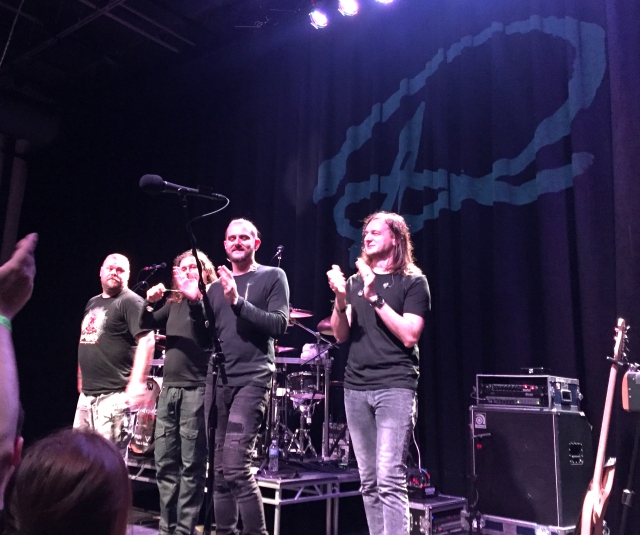