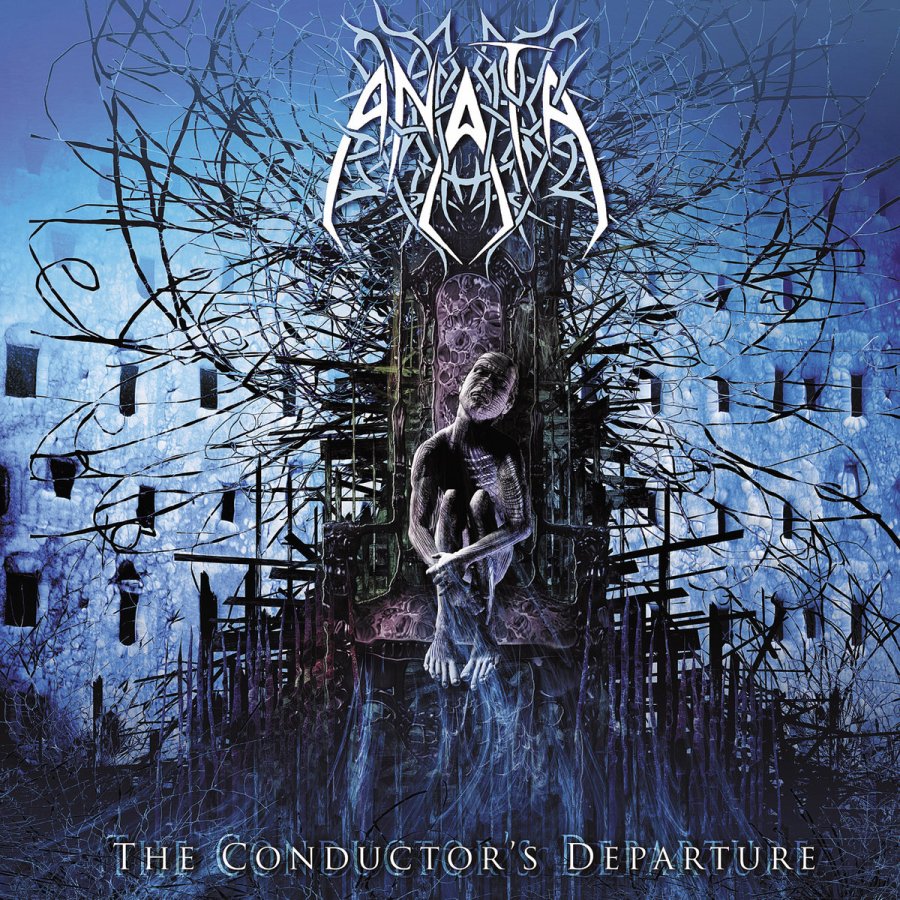 Heavy and incessantly shifting contours — ‘The Conductor’s Departure’ is simply riveting. That constant progression here can leave anyone speechless. Like any technical death sound, these textures are tangled and layered. But when combined with that relentless melodic progression, it only becomes more captivating. This level of sophistication in braiding tech death with complex drawn-out song structures is rare.

Anata is meticulous, but their compositions still project an offhand feel, as if the record was composed on-the-go. In other words, they tread a demanding terrain of understated refinement, tortuously rugged, yet dazzling display of spontaneity. Adds refreshing aspects to an otherwise grinding framework of measured technical progression. This blend of old school with modern technical death is melodic and yet dissonant — a cross-over act of the most demanding kind.

Gottwut’s sonic brew is rooted in the 90s. Not just industrial, techno and symphonic elements – Konglomerat integrates alternative, gothic and occasional hard rock riffs. In spite of constantly shifting its sound and tempo, the record manages to hold its atmosphere. Drawing from a broad spectrum of influences it simply packs enough ammo — more than enough to capture the attention of a goth or an industrial head. Needless to say, those vocals and compositions structured for live shows will inevitably draw well deserving comparisons with this massively influential industrial band from Berlin.

From classical music to thrash metal, all within six degrees of musical separation. For Dream Theater, channeling this stunning wealth of influences is nothing novel. But, a concept album clocking 96 minutes and without any weak moments is extraordinary.

Covering the full spectrum from Overture to catchy choruses — “Are you justified, Are you justified —- Justified in taking, Life to save life”  — they comfortably elevate progressive musicianship to stratospheric levels. Layered passages with grinding riffs and complex time signatures — that sheer jazz like drumming with adequate doses of coarse and clean vocals. These drawn out compositions simply demand our undivided attention.

Within a world of carefully orchestrated concept albums, this level of spontaneity with elaborate structural progression is uncommon. In short, brazenly intricate and yet restrained, Dream Theater composes a rare aesthetic blend of metal and prog mindset. Musically and emotionally complex, Six Degrees of Inner Turbulence is a progressive epic even without attempting to be one.

Featured Image : Shot by yours truly (San Francisco, circa 2012)

“I remember when I first heard DECAPITATED’s ‘Organic Hallucinosis’ and it just blew me away!!!!”–Tomas Haake, (MESHUGGAH). This was in the context of Vitek’s unfortunate death, at the age of 23.

Importance of Decapitated cannot be exaggerated. Intensity aside, that layered pattern of rhythm, leads and drumming — synchronized and complex. Whether it’s “Day 69”, “Post(?) Organic” or the intricately progressive “A Poem About an Old Prison Man” – Organic Hallucinosis shifts technical death into demanding musical terrains. And Decapitated accomplishes that by remaining rooted in old school structures.

Extending the scope of an established genre mandates more than just musical skill – a broader grasp of the context is equally crucial. Essentially, the album captures those alien progressive tendencies into the confines of a tried and tested death framework. Needless to say, it’s a surgical balancing act. Sheer progressive melody brewed into old school death — and without significant deviations from the genre playbook. In short, Organic Hallucinosis is a ruthless exhibition — of musical and aesthetic craftsmanship. A masterful swan song too.

By Selbymay (Own work) [CC BY-SA 4.0], via Wikimedia Commons 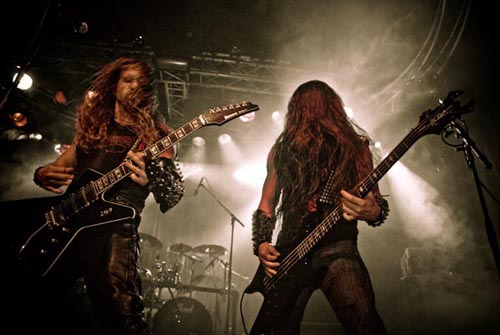 Among the best to have emerged from Down Under is this band named Deströyer 666. Feels like they only entertain one single goal – destroy even the last remaining understated qualities in metal. And that’s exactly what they accomplish. Synthesized from black and thrash elements, Phoenix Rising takes extreme metal aesthetics to unprecedented loudness.

Rough harping choruses, over-the-top guitar melodies, black metal screams and galloping old school riffs. In short, 80s/90s heavy metal signatures exaggerated to the point of no return. From “Rise of the Predator“ to “I Am the Wargod” to “The Eternal Glory of War” – lyrics pretty much mirror exactly what the music conveys. With this brazen approach, they will manage to get through to even the most obtuse of listeners. With no frills old school structures, a style absolutely devoid of pretenses and adequate in substance – Deströyer 666 becomes that essential cross-over band to darker genres. Needless to say, album is rated 666/666.

By Christian Misje (Own work) [CC BY-SA 3.0 or GFDL], via Wikimedia Commons 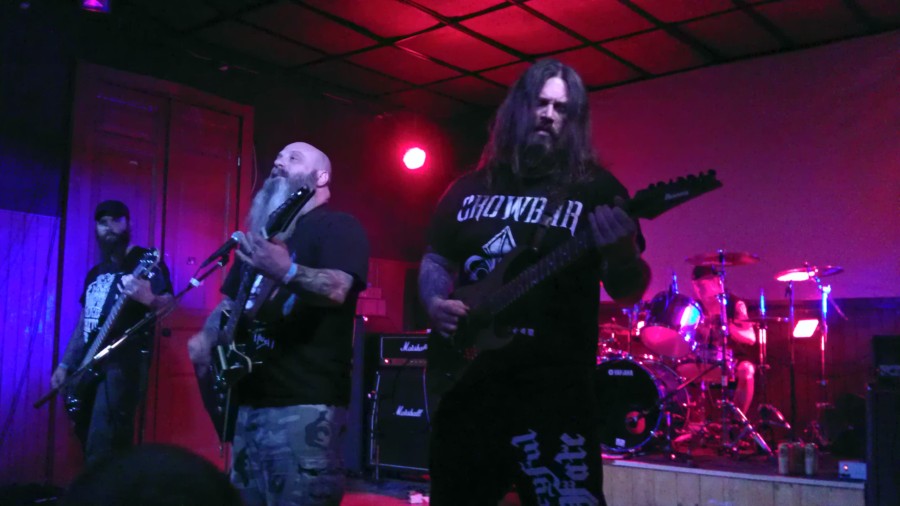 At New Orleans moderate temperatures, 70s Black Sabbath and hardcore punk riffs are known to fuse, forming what we now know as sludge. Crowbar simply crystallized it into a grinding atmospheric doom. It’s downtuned to the abyss and propelled by stocky hardcore punk riffs, usually dragged out to its limits. Rare bluesy strumming and more than adequate raspy vocals – “Slave to no one but your misery. Broken man lies where you used to be” – adds to the essential low. But even at this bleak pace, anyone can easily sense the grinding force that Crowbar inflicts.

These thoroughly grayed out hues may not be everyone’s delight. Crowbar’s creations are essentially tailored – to just fit into the two percentile of the brooding end of the emotional spectrum. But, if gloom is what you seek, ‘Odd Fellows Rest’ is splendid company. 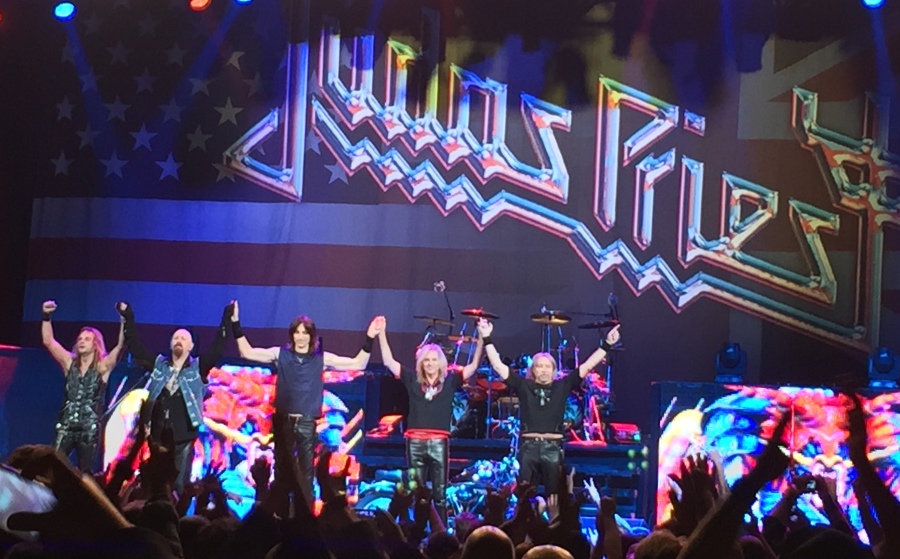 70s sort of form that bedrock of heavy metal, those initial rungs of a genre now riddled with thousands of sub-categories. With early Judas Priest we actually get to experience that seismic shift – how that relatively upbeat hard rock and electric blues start to exhibit darker tones. In other words, Stained Class provides numerous glimpses into the impending transformation of metal.

“The streets run with blood from the mass mutilation, as carnage took toll for the bell” – is definitely not characteristic blues rock Led Zeppelin or an Aerosmith. Nor is that intense and multi-faceted– “You poisoned my tribe with civilized progress, baptizing our blood with disease” – lyrics which could be easily perceived as a commentary, critique or British sarcasm.

Scorching leads, layered and progressive dual guitar melody and that inimitable steely Rob Halford scream. All the vital components which would later shape 80s metal can be traced back to Judas Priest. Essentially, they accentuate the downtuned darker aspects of blues rock, and did that without significant deviation from that blueprint. Stained Class is part of that framework which directly leads to speed, progressive and power metal – essentially triggering a wave – still mutating and afflicting all corners of the civilized world.

By Sibuachu (Own work) [CC BY-SA 4.0], via Wikimedia Commons 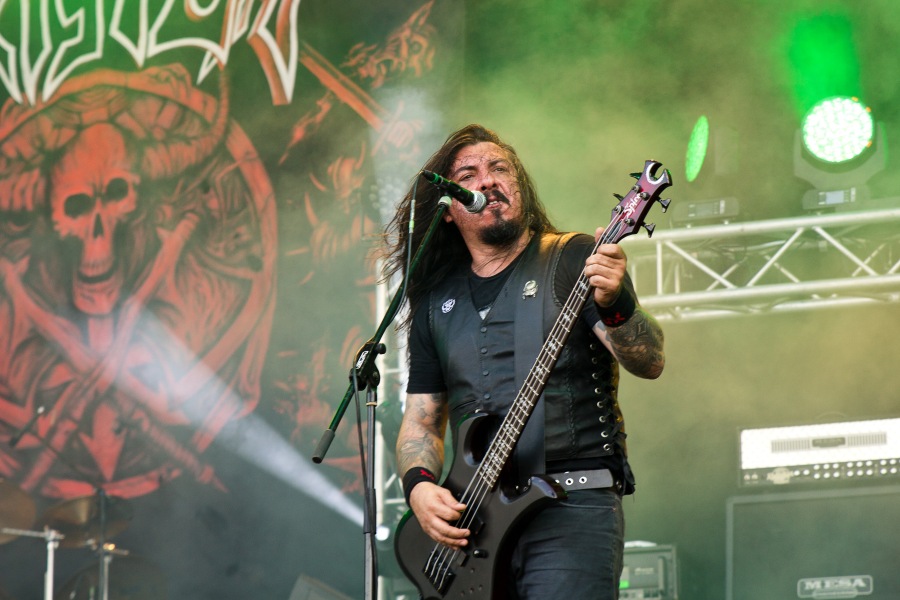 Two seconds of those blast beats and we discern — Southern Storm is no misnomer. From the land of Sepultura emerged another force — Krisiun — but their extraordinary precision and extremity can be a tad overwhelming. These compositions, quite like a complex death metal alloy, elevates that already intricate electric blues to over-the-top intensity. Not to mention that steady hammer of drums, constantly daunting, and recedes only when getting carved up by piercing guitars.

Rooted firmly in Terrorizer, Grave, Immolation and Nile school of old school death – Krisiun’s craft is flawless. In other words, they reflect all the essential deathly qualities — constant and subtle shifts in flow, melodic leads and demanding riff/drum patterns. Quite like Sepultura, this band of brothers consistently push musicianship to disturbing levels of fury. With songs titles like “Slaying Steel”, “Minotaur” and “Massacre Under the Sun” – lyrics become that last cowing piece of this technical death storm. 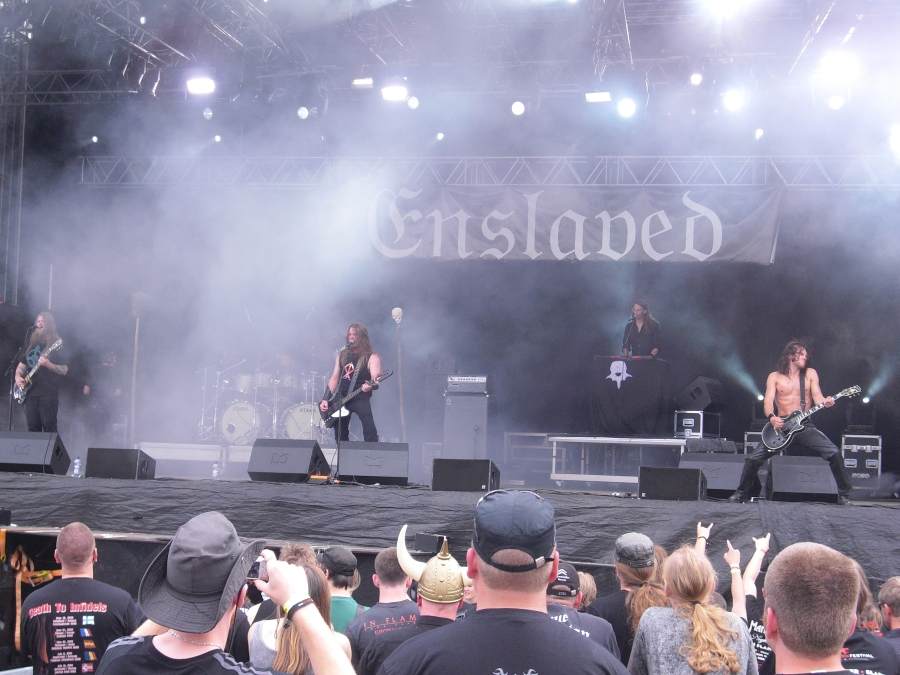 ‘E’ becomes the most brazenly progressive Enslaved record. Experimental keyboards, abrupt temporal shifts and frequent bursts of aggressive riffs — all reminding us of their Viking metal roots. Basically, art rock to symphonic prog to post-metal atmosphere effortlessly brewed with some inhuman screams. Add the use of flute, a surprising jazz segment and a Norwegian electronic synth-pop cover — Enslaved has never been more firmly rooted in both extreme and avant-garde territory.

Without completely abandoning black metal, they has carefully adopted some unproven experimetal progressiveness. Within these uncharted fields, it’s not surprising that they sometimes lurch between sheer greatness to downright peculiar. But, for long time listeners there is nothing unexpected here. The band continues to walk their chosen path – constructing a curiously rich, polarizing, and at times uneven mosaic of progressive black metal symphonies.

Dark Apostrophe at English Wikipedia [CC BY 3.0], via Wikimedia Commons 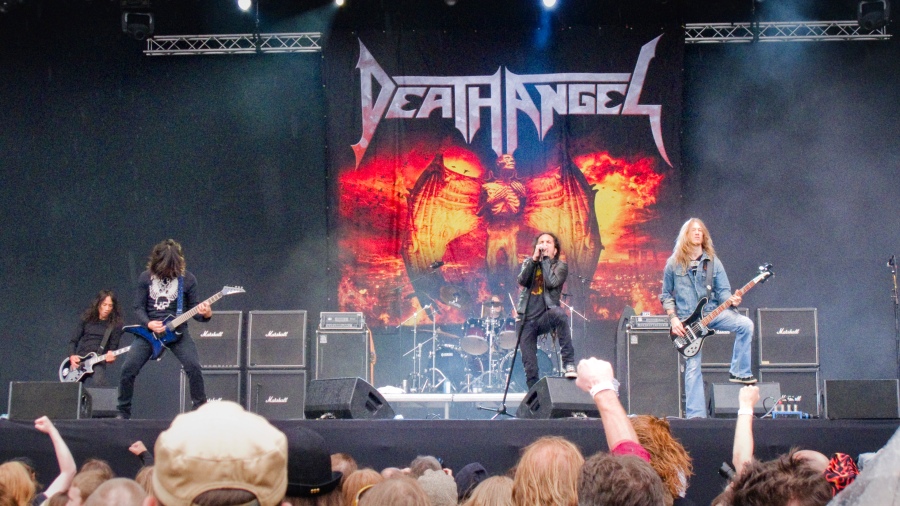 Heavy metal is actually swarming with cross-genre bands, and then there are a few like Death Angel. Over thirty years, and they still wield an uncompromising arsenal of old school thrash. Decked with stunning guitar harmonies, intricate progressions and ultra-thrashy riffs — ‘The Evil Divide’ is a new album with mid-80s sound. Thrash at its creative best.

With that NWOBHM train of break neck riffs and pristine melodic hooks, Death Angel is elegant and loyal to their founding roots. They are sort of unique in persisting with this age old aggressive terrain. As expected, most of their illustrious contemporaries have mellowed, and now fear to tread through these very furious paths.