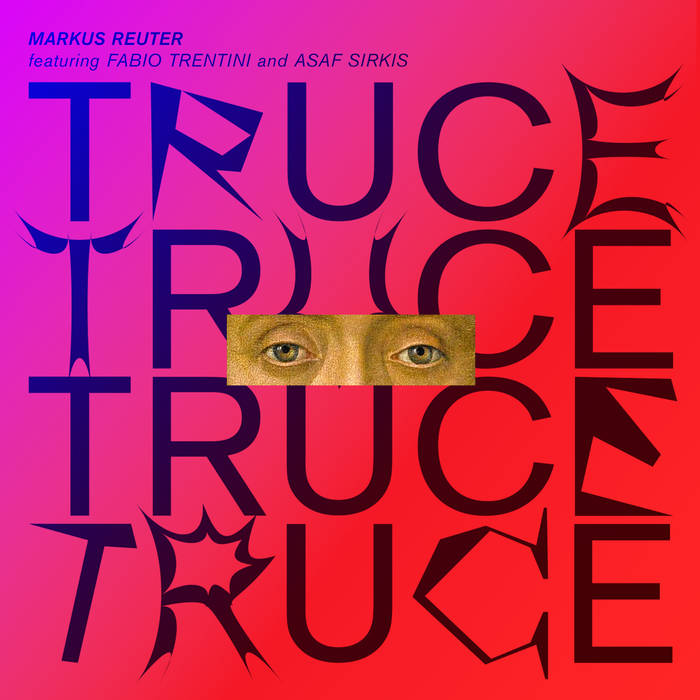 Touch guitarist Markus Reuter’s new album Truce is utterly bracing, a cold slap in the face that boggles the mind and kicks off 2020 in the best way possible.  Recorded live in the studio on a single day in collaboration with bassist Fabio Trentini and drummer Asaf Sirkis,  this is the unfiltered sound of three virtuosos throwing caution to the winds and just going for it. Put simply, these seven instrumentals rock — hard, sharp and smart.

Reuter (best known for his partnership with King Crimson members Tony Levin and Pat Mastoletto in Stick Men) lets rip without a pause, now firing off astonishingly ballsy/brainy solos, now laying down pensive, brooding soundscapes — then layering the one atop the other! Trentini is stunningly melodic and stunningly powerful on fretless bass, always laying down a deep, unshakeable foundation for Reuter’s explorations.  Sirkis (one of the subjects of Bill Bruford’s doctoral dissertation Uncharted) is a genuine revelation on drums — simultaneously disciplined and free, tight and loose, spinning out endlessly compulsive grooves, whether subtle or stomping.  From start to stop, the music these three make is unbeatably powerful, head-snappingly varied, and vividly compelling — whether on the scorching high-energy title track, the brutal mid-tempo funk of “Power Series”,  the abstract balladry of “Be Still My Brazen Heart”, or the Police-ified dub wig-out of “Let Me Touch Your Batman”.  Listening to Truce is an hour-long thrill ride with tons of substance to chew on through multiple listens — one you need to experience for yourself.

Beyond its sheer brilliance, Truce is also a testament to one of progressive music’s unsung heroes — the 100th release masterminded by Leonardo Pavkovic.  Since 2001, Pavkovic’s one-man operation MoonJune Records has been on a mission to “explore and expand boundaries of jazz, rock, ethnographic, avant, the unknown and anything between and beyond” with artists from across the globe.  Whether relatively well-known (Tony Levin, Stick Men, Soft Machine) or criminally anonymous in the Western Hemisphere (Indonesian fusioneers Duwa Budjana and Dwiki Dharmann, Sirkis’ rewarding solo projects and marvelous International Quartet featuring vocalist Sylvia Bialas, masterful European musos like guitarist Mark Wingfield and drummer Xavi Reija), Pavkovic has believed in them, recorded them on their own and in exciting combinations (often at Spain’s La Casa Murada, where Truce was laid down), and helped them take their music to the people.   Already this year, Pavkovic has mounted North American tours of The Levin Brothers (cool jazz with Tony and pianist brother Pete) and vintage English/German proggers Nektar; Stick Men dates in Asia and North America follow starting in February.  Whew!

If all of the above intrigues you, MoonJune currently offers two in-depth ways to get in on the action.  A subscription plan gets you everything released for a year as multiple format downloads plus bonus back catalog albums and samplers plus 25 percent off vinyl, CD and merch purchases. (I splurged on this with Christmas cash, and am already plotting what to get next.)  Or the same amount ($100) gets you 19 album downloads from across MoonJune’s catalog or 19 CDs (selected catalog titles, with a minimal shipping charge added).

But if the above is too rich for your wallet, or you want to dip a toe in the water first, take my advice: listen to Truce.  And buy Truce.  Then dive deeper into what MoonJune Records has to offer.  I think you’ll be glad you did! 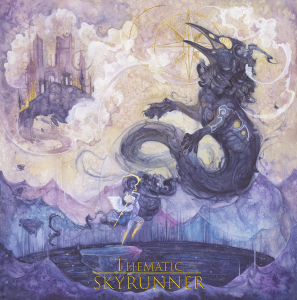 Fort Wayne, Indiana, based prog band Thematic is set to release their new album, Skyrunner, on January 31. I was previously unaware of this group, but I must say the single from the album is quite good. They have a good balance of the classic styling combined with the crunch of a band like Haken. Check out the video below and more info about the band and new album after that.

END_OF_DOCUMENT_TOKEN_TO_BE_REPLACED

From my tribute to Neil Peart, a focus on his lyrics and their spiritual journey:

Fly by Night (1975) was Peart’s first album with Rush. The title track buoyantly celebrates the sense of adventure that should characterize life: “Start a new chapter / Find what I’m after / It’s changing every day.”

But on Caress of Steel (also 1975), with the track “I Think I’m Going Bald,” Peart grapples with mortality: “My life is slipping away / I’m aging every day / But even when I’m grey / I’ll still be grey my way.”

This independent ethos assumed mythical form on 2112 (Rush’s breakthrough hit album of 1976), which depicts a dystopian sci-fi future where a totalitarian priesthood bans guitar music and tries to bring the story’s hero under its total control.

On A Farewell to Kings (1977), the magnificent song “Xanadu” retells the story of Samuel Taylor Coleridge’s poem “Kubla Khan.” Peart depicts the emptiness that results when one is devoted solely to a life of pleasure: “Waiting for the world to end / Weary of the night / Praying for the light.”

Hemispheres (1978) contains “The Trees,” a memorable parable from Peart about a war between oaks and maples. The terrifying twist ending shows the violent cost of egalitarian revolution: “Now there’s no more oak oppression / For they passed a noble law / And the trees are all kept equal / By hatchet, axe, and saw.”

Although aware of humanity’s evil tendencies, Peart’s humane optimism bursts through in “Jacob’s Ladder,” from Permanent Waves (1980): “Follow men’s eyes / As they look to the skies / The shifting shafts of shining / Weave the fabric of their dreams.”

On the jubilant “Limelight” from Moving Pictures (1981), Peart clings to hope for life lived to the fullest, despite the obstaces presented by social convention: “Those who wish to be / Must put aside the alienation / Get on with the fascination.”

The album Signals (1982) laments those who “sell their dreams for small desires,” in the song “Subdivisions,” which makes the mass-production building zones of suburbia into a metaphor for social conformity: “Subdivisions / In the basement bars / In the backs of cars / Be cool or be cast out.”

Grace Under Pressure (1984) contains the haunting song “Aftermath” about the death of a friend: “Suddenly, you were gone / From all the lives you left your mark upon.”

It’s a testimony to the impact of Neil Peart that so many people felt such a blow from his death.

Music gives shape to our lives as we reflect along with it in our private interior dialogues. Peart was a conversation partner for many in this inner world.

Although he was agnostic in public, yet always “looking for an open door” (as he put it), perhaps the hope and joy he did discover in life may have enabled him to find his way in the end.

Last year, Jon Courtney and Chloë Alper reunited the much-loved Pure Reason Revolution, playing their first show in close to eight years at Midsummer Prog Festival and performing their debut album The Dark Third in full. Today they are excited to announce the release of Eupnea, their first new studio album in nearly 10 years, for the 3rd of April 2020.

2019 was a busy year for me, and unfortunately I never got around to reviewing these physical submissions to Progarchy. Things have slowed a bit, so here you go – three solid albums of very different sounds.

This album was a bit of a pleasant surprise for me. I had no idea what to expect. It is an instrumental album, but it isn’t like your typical instrumental prog album. It is quite unlike anything I’ve heard before. It is very cinematic. The music tells its own story in a remarkably compelling way. Monsieur L’Épée is obviously a master of his craft.

A French composer and guitarist living in Berlin, Fédéric L’Épée has been in the band Shylock, Philharmonie, and Yang. His musical influences are diverse, which becomes pretty obvious once you start listening to The Empty Room.

This album manages to be peaceful without being boring. I’d say this is one of the most interesting instrumental albums I’ve heard in a long time. The interplay of the guitars, bass, drums, and keyboards is simply stunning. The guitar tone is clean and pleasant. The solo on “Inévitable traversée” is quite nice. “Descending the Slow River” is a bit of a slower piece that may drag a little bit, but, like the other songs, it tells a story through the music. You get a sense of a slowly flowing river through the way the instruments are played.

END_OF_DOCUMENT_TOKEN_TO_BE_REPLACED

Suddenly, you were gone
From all the lives you left your mark upon

A natural byproduct of having a deep and abiding passion for music is that you collect musical heroes: individuals encountered on your musical journey who leave their mark on you. These individuals stand out from the crowd, whether it be for their skill as players, their talent as creators, their personality or their life choices. You didn’t need to spend long on social media these past two days to learn that, for a great many people, Neil Peart was one such individual.

END_OF_DOCUMENT_TOKEN_TO_BE_REPLACED

I’m still reeling from the news that Neil Peart is dead. I’m sure you all are too. None of us expected this. I think we all held out a glimmer of hope that Rush would play another show now and then or come out with another album without a tour. I certainly never imagined in 2015 that Peart would be dead within five years. My heart truly goes out to his wife, daughter, Geddy, and Alex.

This isn’t an obituary. Many others know the details of Peart’s life far more than I do, and I’ll direct you towards them for those kinds of remembrances. Instead, my thoughts on Peart and Rush are deeply personal. There is nothing unique about my experiences with Rush. I know for a fact that others, possibly thousands or millions, have had similar experiences. But this is mine.