Ginger Baker, the eccentric drummer best known for his work in Cream and Blind Faith, passed away this morning at the age of 80. With Baker’s passing, Eric Clapton remains the sole surviving member of Cream (Jack Bruce passed away in 2014).

Here’s Baker – one of the true pioneers of rock drumming – in action: 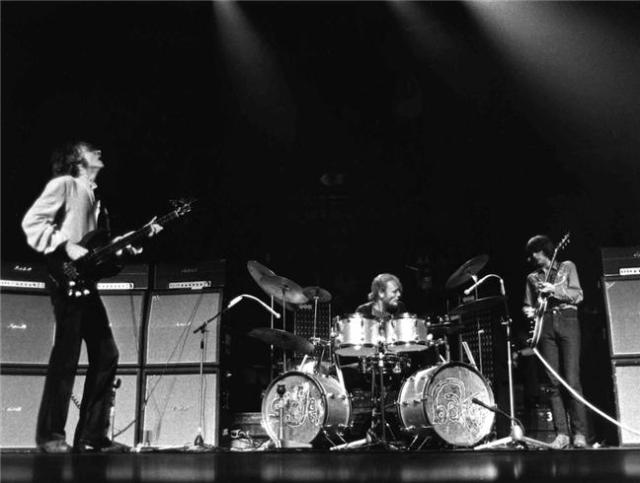 A worthwhile imaginary history: Eric Clapton doesn’t leave the Yardbirds in March 1965. He stays, compromised but successful, and the band’s psych-garage boilerplate “For Your Love” is the first in a clutch of similar vocal-fronted hits that eventually morph the band into a second string Moody Blues.  Jeff Beck and Jimmy Page never join the band, thus there is no Jeff Beck Group (thus no Rod Stewart, no Faces), and no Led Zeppelin. Clapton’s presence in the Yardbirds corks those possible future bottles. And, of course, there’s no Cream, and as such possibly no Jethro Tull or Black Sabbath, and, most definitely, no Mountain. There’s an argument here against Hendrix as well….

Such are Great Man theories of alternate history. Easily corruptible, but fun as thought experiments, and this one makes as much sense as any. Cream’s influence on rock is so profound, their catalog so fundamental, that their absence would have set transatlantic rock down a very different path. Cream backgrounds and informs every subsequent in-unison bass’n’guitar heavy hook (read: stoner rock), every song where a tom-obsessed drummer plays a rhythmic lead, every power trio, and every rock-based long form live jam (growing out of the “rave ups” that made the Yardbirds the scenemakers they were in Clapton’s day).  Even if you’re not a huge fan of Eric Clapton — and I’m not — and you could create similar wouldnahappened scenarios with his Cream co-pilots (and geniuses in their own right) Jack Bruce and Ginger Baker, it was Clapton who was the tortured searcher, who saw the productive warring of Baker and Bruce as a positive, and was the driver of Cream with its wheels of fire, perpetually in a state of just passing through.

When they issued their last proper album in August 1968, Cream were so popular that their twin LP swan song went platinum, the first double rock album to do so.  Its studio disc summed in spirit Cream’s first two efforts, Fresh Cream (1966) and Disraeli Gears (1967), while the live disc showcased Cream’s already legendary, and loud, performance prowess, and the tensions banked therein:  it’s a sly joke when at the end of their cover of Robert Johnson‘s Crossroads — a song still played on rock radio 50 years after its recording — we hear Jack Bruce say, “Eric Clapton, please, for vocals.”  Yes, Clapton’s vocals were integral to Cream even as they were secondary to Bruce’s, but it’s his guitar playing that’s the thing, never more so than on “Crossroads,” and Bruce’s toast could just as easily be a wheedling needle as props.  It’s as if Bruce was continuing a conversation that moments before he was playing on his bass: whaddya got, and where else can you go?

The dense, thick battle lines of Cream’s live show were the Mr. Hyde to their studio work, where interpretations of electric blues standards sat next to original songwriting cutting directly to proto-prog poetics, the product of Bruce and his songwriting partner, Pete Brown.  The combination of forms made for a catalog that could put “Spoonful” or “Outside Woman Blues” or “Born Under a Bad Sign” back to back with weirdly beautiful non-blues like “I Feel Free” or “World of Pain” or “Those Were the Days.”  These last were intrigue, fanciful psychedelic flights, for the young Clapton, the blues purist whose work would never again be so adventurous or influential as with Cream, his traditionalism reconstructed by the Band’s Music from Big Pink (July 1968), which left him awestruck.  Playing go-between for Bruce and Baker, in the wake of Big Pink, must have seemed an almighty chore whose fruit was withering.

Of artfully told lost love, “Deserted Cities of the Heart” is Cream ’68 in full studio flight, a richer sound afforded by rapidly advancing recording technology (although still short of the breathtaking step Led Zeppelin would make just months later on their first album) and the psychedelic mood further defined by producer Felix Pappalardi, whose string contributions add dynamic breadth and sweep to the dramatics and roadmap his work with Mountain.  Three versions here: the original studio recording, with its dark and perfumed paisley fully intact; the original live version pulled from the same set of songs the band used to put together Wheels of Fire‘s live disc (and which appeared on Live Cream II in 1972); and its last incarnation, from 2005’s reunion show, before things turned bad again between Bruce and Baker and Clapton got bored, containing an interesting energy, as Bruce brings the goods in the wake of his liver transplant, and Clapton and Baker play with a subtle restraint retooling the song’s psychedelia towards a jazzier, bluesier roll.  The spark is still clear, igniting the air, and we fall to our knees thankful that Clapton left the Yardbirds.

In 1968 Jimi Hendrix took the stage at the Winterland Ballroom in San Francisco, and as part of the set introduced a song that had worked its way into the repertoire:  “Right now we’re gonna do a song by some real groovy cats, it’s too bad they are breaking up, it’s one of the heaviest groups in the world . . . it’s not sayin’ we can play the thing better than them, it’s just sayin’ we dig the cats and dig this song and we’d like to do it our own way, which will be an instrumental jam.”  The song was Sunshine of Your Love, and the group Hendrix referenced was (The) Cream.

Hendrix’s powerful instrumental take on the song caps a double tribute:  Cream wrote Sunshine of Your Love on the heels of seeing Jimi Hendrix perform in London, as a response to the jaw-dropping challenge he proposed as a performer and songwriter, and in its riff and melodies the song holds at once the past and future of rock and roll.

The song was penned by Jack Bruce, Cream’s bass player, chief vocalist, and lead songwriter.  Bruce led the life of a musical prodigy, a force that pushed and pulled his similarly-gifted peers, to such an extent that Ginger Baker, arguably Britain’s most influential drummer and certainly one of Bruce’s few musical equals, left one band (Graham Bond Organisation) because of him and started another band (Cream) despite his presence.  Guitarist Eric Clapton — another equal — insisted Bruce be a part of Cream, and Baker relented because, as he noted, both Clapton and Bruce had the same innate gift of “time.”

Since Jack Bruce died last week, I’ve thought a good deal about what Sunshine of Your Love, Cream, and this firebrand musician have meant to me through the years.  Cream had hits, lots of hits, scattered across their three studio albums, but Sunshine of Your Love stands out among their work (“Crossroads,” rightfully still played on classic rock radio, being the highpoint of their live recordings).  The riff is simple, as if, yes, they were taking cues from Hendrix, who disassembled the blues root of rock and roll, slowed the rhythms down, emphasized their laziness while adding blistering solos and an African funk.  Separation of bass and drums and guitar became important, as if the transformation was about creating rather than filling space.  In Sunshine of Your Love, Cream takes the Hendrix aesthetic and writes it large, in four minutes and ten seconds mapping Led Zeppelin, Black Sabbath, and most Heavy music for the next half century.  It’s a blues made universal, and because of Hendrix’s own reaction one doesn’t get the idea that Cream was somehow playing Elvis to Hendrix’s Little Richard but, on the contrary, like Hendrix, actually embodied a much-needed cultural embrace.  This wasn’t just heavy music for white boys.

Cream chugged hard and burned hot for two years before they couldn’t stand it or each other any more.  Their recorded live work is mind-blowing but not for the faint of heart, and while Clapton became the superstar, with some justification, it was Bruce and Baker that ran the engine, driving each other mad while simply driving Clapton to greater heights.  Sunshine of Your Love became ten then fifteen minutes long, the jams endless, the power draining as quickly as it had mounted.  Clapton left for Blind Faith, not expecting Ginger Baker to follow even though he did, and Bruce was on his own.  He released a fabulous solo record, Songs for a Tailor, with very non-Cream arrangements and approaches, and then from the perspective of a Cream fan like myself kind of drifted.  He landed in projects like the one where he became the bassist for a power trio that Cream inspired, Mountain, hooked up with Robin Trower in yet another power trio, rid of Cream but not rid of Cream, and played various so-so groups with the jazz rock dudes of his era.  He reunited with his Cream mates in 2005 for a set mostly plagued by the adult rock smoothness Clapton’s purveyed since 1972 (the stellar Pressed Rat and Warthog, a Baker chestnut that will never die because of sheer weirdness, notwithstanding).  The grit, the volume, the burn were regrettably, inevitably, flattened.  As with Clapton, as with Baker, Bruce’s best work was when he was a journeyman, with Cream.

It is a catalogue every bit as thrilling as it is brief.  Those core Cream records remain embedded in the rock psyche, the elephant in any rock and roll room, their centerpiece Sunshine of Your Love.

Sunshine of Your Love

Deserted Cities of the Heart

Never Tell Your Mother She’s Out of Tune

Theme from an Imaginary Western

Jack Bruce, Cream’s extraordinarily talented bassist, has died at the age of 71. I have posted the full story below.