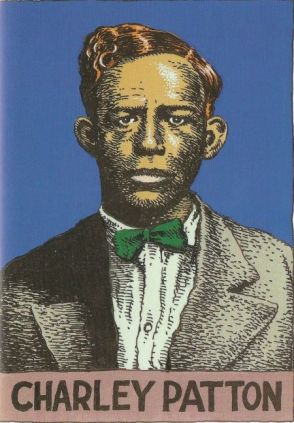 While John Fahey was working on the set of songs that included “Sunny Side of the Ocean,” for The Transfiguration of Blind Joe Death (1965), he was completing his master’s thesis in folklore at the University of California at Berkeley, the first biography and analysis of the work of blues guitarist/singer Charley Patton.  It was published in paperback form in 1970 and is now considered a classic of blues literature.  (Like most early Fahey endeavors, original printings go for exorbitant sums.  However, indulge yourself here for free.)  Fahey’s obsession with Patton is clear but also realistic, and contains in it the reach and grasp of a true scholar.  One gets the impression he probably could have rattled this off in his sleep, despite the occasional dry stiffness no doubt desired by his thesis committee.  Fahey’s point: blues and folk scholarship was missing out big on players like Patton, who for years had been written off as being past the cut-off point of interest of circa 1928, i.e., more influenced by records than oral tradition and thus not worth bothering over.  The racism banked deep in this position aside, Fahey argues successfully that the atmosphere of non-direction in the recording studio for blues artists of Patton’s era (1929-1934) in particular — a result of A&R men having no idea what black communities wanted in the “race records” they were promoting to those same communities — gave players like Patton freedom to perform more naturally than they might otherwise, and produced work that provided a window into African American existence in the Mississippi Delta in the first half of the 20th century.

Fahey’s efforts notwithstanding, Patton remains a dazzling mystery, dead and mostly forgotten for over thirty years before Fahey’s scholarship and the debts acknowledged by artists like Bob Dylan.  Far wilder in lifestyle and presentation than that other King of the Delta Blues, Robert Johnson (himself no stranger to the on-the-edge, rough life of an itinerant Delta musician) Patton’s repertoire was also more diverse, and his showmanship as much a part of his legend as his musicianship to the people who knew him and had seen him perform (to the extent that Son House expressed surprise to Fahey on hearing a Patton record Fahey played back for him, not recalling his friend’s potent guitar prowess but instead Patton’s “clowning”).  While Patton’s legacy never attained the rock’n’roll sanctification accorded Johnson’s work — there’s no equivalent for Patton to Cream’s cover of Johnson’s “Crossroads” or the Stones’ “Stop Breaking Down” — his work constitutes in its rawness an essential rock document, the direct antecedent to the entire career of Howlin’ Wolf (who Patton mentored), and thus by association Captain Beefheart and Tom Waits.  So if Robert Johnson is closely associated with classic blues rock as exemplified by Cream and the jam bands that followed, Patton can to some degree be claimed by artists who inhabit rock’s lunatic fringe.  This isn’t, of course, an all-or-nothing proposition, but just one possible, shifting observation.  Patton was a punk.

END_OF_DOCUMENT_TOKEN_TO_BE_REPLACED 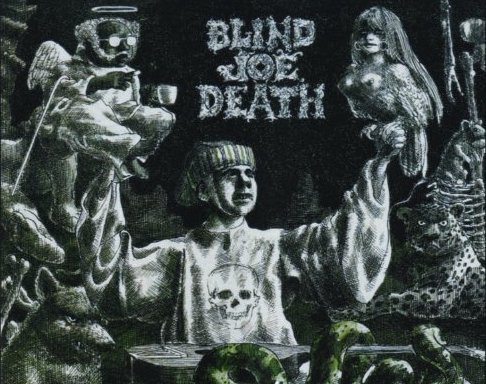 Beginning in 1959, John Fahey’s “Blind Joe Death” excursions for solo acoustic guitar were the first to radically reconsider traditional blues and old-time music, extending by personalizing what Harry Smith did with the Anthology of American Folk Music (1952): rather than mythologizing what at that time was a largely unknown recorded legacy, as Smith did, Fahey made it breathe life, by quoting in his riffs on the traditional all manner of contemporary music.  There is not a folk or jazz or avant-garde or prog rock guitarist who doesn’t owe Fahey a debt for this, for not only breaking boundaries — with which he was hyper-literate — but making such things seem irrelevant in the music he made.

“On the Sunny Side of the Ocean” is from 1965’s Transfiguration of Blind Joe Death.  It is a masterpiece of droning open-tuned right-hand wonder, building steam and dimension until it opens up with an unexpected pull off that turns the entire ship eastward on its perfumed journey.  It is here, in this simple but everything phrase, that Fahey’s influence is apparent, as it would echo down the years through Popol Vuh and Opeth, just as Charley Patton and Mississippi John Hurt echoed through Fahey.