Today is the sixth anniversary of the release of the final Rush studio album, CLOCKWORK ANGELS.  It can get “nun more” prog.

[This piece is dedicated to my great and brave friend, Steve Horwitz, fellow Rush-ian]

Rush’s nineteenth studio album, Clockwork Angels, came out on June 12, 2012.  It was the first album to be distributed by heavy-metal label, Roadrunner, and the second to be produced by Nick Raskulinecz.  As mentioned at this beginning of this book, the story of Clockwork Angelsis such an artistic success—as a story, a concert, a novel, a sequel to the novel, a graphic novel, an audio book, and a series of comic books—that it really overshadows not only the actual album but much of Rush’s other art.  It is, of course, the culmination of forty years of care, of love, and of purpose.  However much the Clockwork universe has dwarfed the album itself, it is very much worth considering the original source material.

Clockwork Angelscame out a full six years after Snakes and Arrows, a break between albums even greater than that between Test for Echoand Vapor Trails.  Still, few worried as hints came out frequently about the forthcoming Rush album during that time, and Rush even released versions of the two opening songs as singles, performing them on the Time Machine Tourof 2011.  As few would disagree, the wait for the final product was well worth it.  While Moving Pictures—because of its time and place in history—might always remain the iconic Rush album, Clockwork Angelsis arguably the best, cohesive piece of art the band has ever made. It reveals a maturity in lyrics and music understandably absent in the first few Rush albums, but it also possesses every explosion of energy those albums expressed.

END_OF_DOCUMENT_TOKEN_TO_BE_REPLACED

My favorite Rush album has been, at least going back to April 1984, Grace Under Pressure.  I realize that among Rush fans and among prog fans, this might serve as a contentious choice.  My praise of GUP is not in any way meant to denigrate any other Rush albums.  Frankly, I love them all.  Rush has offered us an outrageous wealth of blessings, and I won’t even pretend objectivity.

I love Rush.  I love Grace Under Pressure.

I still remember opening Grace Under Pressure for the first time.  Gently knifing the cellophane so as not to crease the cardboard, slowly pulling out the vinyl wrapped in a paper sleeve, the hues of gray, pink, blue, and granite and that egg caught in a vicegrip, the distinctive smell of a brand new album. . . . the crackle as the needle hit . . . .

END_OF_DOCUMENT_TOKEN_TO_BE_REPLACED

The last album produced by the then fourth-member of Rush, Terry Brown, Signals (September 9, 1982) marked yet again a major progression in the music of Rush as well as in the lyrics of Neil Peart.  The pressure to produce something similar to the previous year’s Moving Pictures naturally proved immense, as they had never encountered such success.  On the Moving Pictures tour alone, fan attendance doubled at concerts, and almost anyone in the American Midwest could hear one of three tracks from the album almost anytime on FM rock radio.  But the three main members of Rush decided that a second Moving Pictures would be too easy.  They had done that album, accomplished what they had sought to accomplish, and they wanted to take their music in new ways.  In particular, Lee had become more and more interested in keyboards and composing on them.  He never planned to become a “Keith Emerson,” but he loved the challenge the keyboards brought him. [1]  Not surprisingly, especially given Lee’s interest and the learning curve he needed to understand and overcome regarding synthesizers, the keys employed on the album had either 1) a deep, booming bass sound or 2) an airy, soaring feel.  Lee remembers:

I was getting bored writing. I felt like we were falling into a pattern of how we were writing on bass, guitar and drums. Adding the keyboards was fascinating for me and I was learning more about writing music from a different angle.[2]

Further, he claimed, the keyboards allowed Rush to expand beyond the trio without actually adding a new member of the band.[3]  With Signals and the following concerts to support it, Lifeson claimed he felt “almost re-born” with the new sound. [4]

END_OF_DOCUMENT_TOKEN_TO_BE_REPLACED

Guess what? The graphic novel, Stalag-X, that I wrote with TV writer-producer Steven L. Sears (remember Xena, Swamp Thing, The A-Team?) is almost here. It’s about human prisoners caught in an alien POW camp during a ruthless future war. Mike Ratera did the art, and the hardcover graphic novel is being published soon by The Vault.

Joe Human is taken to a harsh POW camp on a distant planet where he’ll be examined, tortured, and forced to endure experiments that rip into his very mind as the alien Krael seek to answer the question What is Human?—a question that, in their hellish situation, the human prisoners are finding hard to answer.

Steven and I have been working on this graphic novel for years (the saga of getting it into print is almost as long as the story is!), and we’re really excited that it’s finally coming out. It’s worth the wait, I promise! Stalag-X will debut during Emerald City Comic Con in Seattle at the beginning of March. Our original bonus Stalag-X novella, “Not a Prisoner” will be included in this edition. 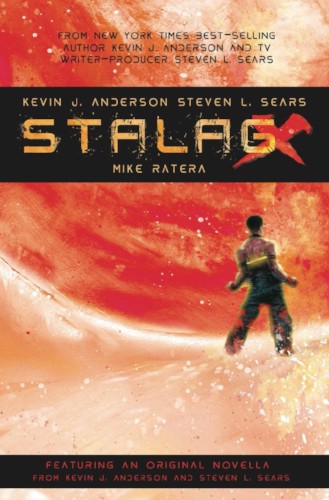 Paying It Forward: Prepping for This Year’s Superstars Writing Seminar

In 2010, Rebecca and I got together with fellow bestselling authors Brandon Sanderson, David Farland, and Eric Flint to launch a career-oriented writing seminar. The Superstars Writing Seminars have grown each year, and hosting it is a huge job.

This year’s Superstars is Jan 31–Feb 3 in Colorado Springs, and it’s our biggest one ever. Right now, Rebecca and I are scrambling to finish our PowerPoint presentations. For weeks we’ve been working with our assistants Chris, Diane, and Marie—and lots of other volunteers—to gather and organize boxes and boxes of materials for Superstars (enough to fill the basement and several offices). Next time you see Chris, Marie, Diane, Nancy, Ike, or any of our staff, tell them how awesome they are.

People are already here for the seminar, and we can’t wait. I’ll fill you in later, but if you want to find out more, check out our Superstars website superstarswriting.com. 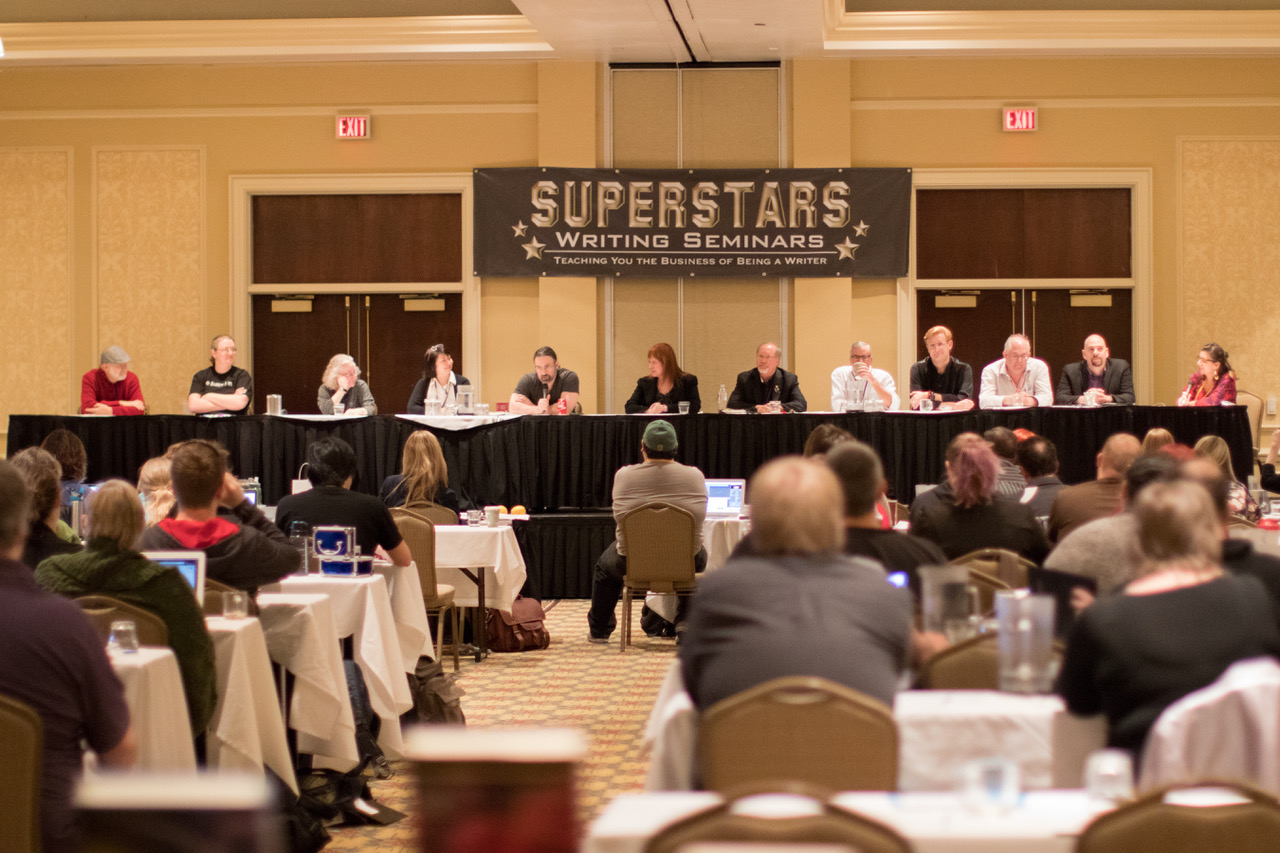 I’ll write you again once the Superstars whirlwind is over. Keep reading!

END_OF_DOCUMENT_TOKEN_TO_BE_REPLACED

In honor of the 40th anniversary of the release of A FAREWELL TO KINGS.

What followed, 1977’s A Farewell to Kings, though, had far more in common with 1976’s 2112 than it would with 1980’s Permanent Waves.  Not appearing on the market until September 1, 1977, A Farewell to Kings ended the new album every six months schedule Rush has followed thus far.  A brilliant album in and of itself, A Farewell to Kings still belongs to Rush 2.1 as I have defined it.  So does the follow-up album, Hemispheres.  Certainly, Rush tried many new things—in terms of album structure, lyrical depth and story telling, and musical complexity—than it had on the first several albums.  “We had written material that was a little beyond us, considering our level of musicianship at the time,” Lee later admitted.[i]  But the progress is in continuity, a major reform rather than a revolution.  “Our progress has always been sincere—not in an arrogant way, but for our own pleasure,” Peart stated in 1982.  “We’ve always incorporated music from people we liked, so it has made us stylistically schizoid.”[ii]

While there are no side length tracks on A Farewell to Kings, the album revolves around its two major songs, “Xanadu” at 11 minutes in length and “Cygnus X-1” at almost ten and 1/2 minutes.  Thematically, Peart continues to embrace both the fantastic—“Xanadu” based on the iconic romantic English poem, “Kubla Kahn,” by Samuel Coleridge—and science-fiction, “Cygnus X-1.”  At the time, Peart lauded fantasy writing in lyrics.  “It’s a way to put a message across without being oppressive.”[iii]

END_OF_DOCUMENT_TOKEN_TO_BE_REPLACED

Kevin J. Anderson is not only our greatest living science fiction writer, but he’s also a great progressive rocker.  Now, he’s released a complete bibliography of his works.  Enjoy.

Well, in perusing Cygnus X1’s website just now, I found even more information about Rush.  Stuff that had totally eluded me.  Cygnus, what would we do without you???  Thank you!

Kevin J. Anderson has just announced that CLOCKWORK LIVES will be a graphic novel soon.  How very cool.

Is there a greater anthem of individualism and anti-conformity in all rock history than Rush’s 2112?  No folk song of the 1950s or protest song of the 1960s comes close to matching Rush’s power of words and music.  Even more than “Bohemian Rhapsody,” 2112 makes us want to bang our heads and raise our fists.  Sorry, Garth.

END_OF_DOCUMENT_TOKEN_TO_BE_REPLACED

While Caress of Steel ended on an organic, open and free-spirited note, their fourth album, 2112, began with discordant and spacey computer noises and swatches of sound.  The contrast in mood and sound could not have been greater.  2112 even inverted the structure of Caress, placing the epic side-long track on side one of the album, with the shorter songs on side two.

Again, it’s worth remembering that if they were going to end, they were going to do so on their own terms.  If Rush was going “down the tubes,” they were going to go down with a serious statement and a very, very loud thud.  No whimper.  Only a bang.  “We talked about how we would rather go down fighting rather than try to make the kind of record they wanted us to make,” Lee remembers.  “We made 2112 figuring everyone would hate it, but we were going to go out in a blaze of glory.”[i]  Alex feels the same.  “2112 is all about fighting the man,” he states.  “Fortunately for us, that became a marker. That was also the first time that we really started to sound like ourselves.”[ii]  It is hard to judge whether or not this anti-authoritarian streak in Rush came from the group as a whole or from each of the three individuals who made up the band.  Perhaps the distinction is a false or a super-fine one.

END_OF_DOCUMENT_TOKEN_TO_BE_REPLACED

I wish I had a review ready, but I just received the book today!  So, sadly, no review yet.  Just a notice.  This, however, is the conclusion to Anderson’s brilliant, Saga of Shadows trilogy.

For those of you who don’t know, Anderson is not only one of Neil Peart’s closest friends, but he’s also the co-author of Clockwork Angels and Clockwork Lives with Peart.  Much to celebrate in the prog world.

What else to write about Kevin?  I mentioned he’s brilliant, but did I mention he also writes lyrics for Roswell Six, is a great guy, has an equally great wife, and has been nominated for the Hugo?