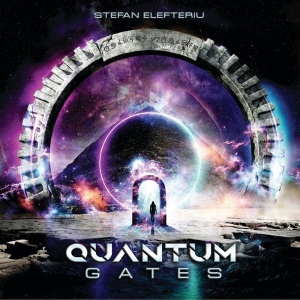 Editor’s note: Today we are happy to bring you a guest review of Stefan Elefteriu’s album, Quantum Gates, by Chloe Mogg, a UK-based singer/songwriter and music journalist. Typically electronic-style music might be considered on the fringes of what we cover here at Progarchy, but Stefan’s music is anything by typical.

Stefan has a fascinating story. He began studying violin at a young age in Communist Romania, but he ended up in a rock band called Blitz in the late 1970s. With communism forbidding privately owned businesses, Stefan built his own synthesizers, speakers, and other equipment so he could make theatrical soundtracks. With the fall of communism his career expanded into the film and advertising realms. Those influences are clear on Quantum Gates, but the album also features ethereal vocals at points. There are some heavier rock moments, while the rest of the album definitely has traits common with the more psychedelic side of prog. This isn’t techno dance music, which is what I usually think of when I think “electronic music.” This is serious music worthy of serious attention. It’s also very good. Since I clearly have much to learn about this kind of music, I’m happy to turn the rest of the review over to someone more knowledgeable:

A journey through space, time and numerous musical genres, Stefan Elefteriu is an artist not afraid to think outside of the box. Progressive and electronic based, “Quantum Gates” is the latest release from the genius behind the music. An experience not for the faint hearted, “Quantum Gates” soars through realms of sci-fi based music straight from the soul. With quite the story behind his music, Stefan’s journey began by building his own synthesisers in Communist Romania to scoring a science fiction film. A multi-instrumentalist that creates music without boundaries, the truly immersive experience is suited for fans of classical, rock and electronic elements fused together.

On the album, Stefan mentioned, “Twelve portals open to twelve different worlds awaiting discovery through imagination, fantasy and feelings… Go beyond the Quantum Gates and, with each re-listening, you will perceive new territories of musical expression. Let the evolution and permanent dialogue of the melodic lines – based on symphonic counterpoint – take you through a new multidimensional sound universe.”

Touching familiar ground that Vangelis, Pink Floyd, Enigma and Kraftwerk have been upon, Stefan’s album introduces parallel worlds of hope during the world’s current climate. Like something you’d hear on the Interstellar score, the vibrant journey is accessible yet armed with complexity. An escapism for fans across the globe, the talent that Stefan has is clear in the near release.