Yes, I’m getting a jump on things. After failing to pen a “Favorite Albums of 2015” earlier this year, I figured I need to strike while the iron was hot and I had a few moments of free time.

Those who follow the proceedings here at Progarchy.com likely know that I am the resident “jazz guy.” Jazz probably makes up close to half of the 75,000 or so songs in my collection. I first “discovered”—that is, really listened to—jazz in my early twenties; my first jazz albums were Keith Jarrett’s “The Köln Concert” and “Kind of Blue” by Miles Davis—one being the best-selling solo piano album of alltime and the other being the most famous jazz album yet produced. “Kind of Blue” is notable here  because the first song on The Tierney Sutton Bands’ (www.tierneysutton.com) brilliant album “The Sting Variations” is “Driven to Tears”, but opens by directly quoting Davis’ “So What”:

Below is the short review I recently left at Amazon.com.

This exceptional album, which continues Tierney Sutton’s impressive run of very good to outstanding releases, is a revelation in several ways. 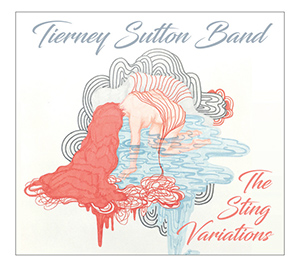 First, the playing and singing is of the highest order, with Sutton and band so perfectly sympatico that they should appear as one definition of “organic” in Webster’s Dictionary. There is a remarkable economy married to robust breadth and depth; in other words, the musicians never overplay—every note is necessary and purposeful—but they also never under-commit; each song is played with masterful purpose, focus, and command. An example of this is “Seven Days”, which opens with a simple bass line and plaintive, quiet vocals and then builds in both musical and emotional complexity, capturing the conflicted (“Though I hate to make a choice”) but assertive (“the fact remains, I love him so…”) lyrics. Sutton’s vocals are spell-binding, combining both a light innocence and a rich maturity; the countless shades of emotion and intonation are remarkable.

Finally, the selection of Sting songs is inspired, not simply because Gordon Sumner draws deeply on jazz in his songwriting, but because the lyrical content is so eclectic and his best songs are immediately memorable but never simplistic. That Sutton brings a female voice and feminine genius to the entire project makes this, in my opinion, a truly special recording. A perfect example is found in “Every Breath You Take (Lullabye)”, in which the mega-selling single is both subverted and reimagined, turned from a somewhat unsettling stalking tune into a hushed and then soaring reflection on the complexities of loving one’s child.

An album of covers can be many things: an homage, an exercise, a one off, a replication, a dedication. This album, however, is a work of musical art, which demonstrates the musicians’ respect for the songs and songwriter not through slavish imitation, but brilliantly imaginative explication that looks backward and forward in perfect balance, as most great art does. A masterpiece.