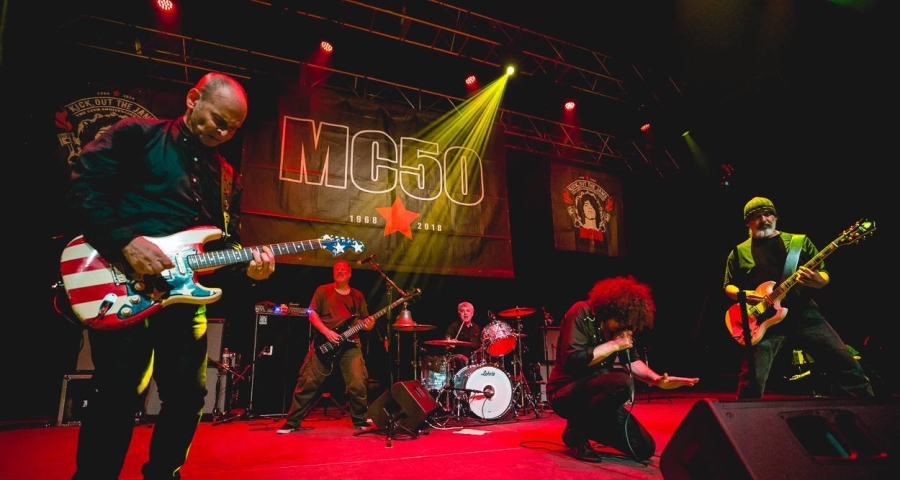 Brothers and sisters, I wanna see a sea of hands out there … I want everybody to kick up some noise, I wanna hear some revolution … Brothers and sisters, the time has come for each and every one of you to decide whether you are going to be the problem or you are going to be the solution!  You must choose, brothers, you must choose.  It takes five seconds, five seconds of decision, five seconds to realize your purpose here on the planet.  It takes five seconds to realize that its time to move, it’s time to get down with it.  Brothers, it’s time to testify.  And I want to know – are you ready to testify?  Are you ready!!  I give you a testimonial.  THE MC5!!

As Brother J.C. Crawford’s ghostly, prerecorded invocation echoed in our ears, Wayne Kramer welcomed his audience (including me, my older brother, and my friends from high school and college) with a giant grin, a wicked riff from his Stars and Stripes Stratocaster, and the unmistakable, hyped-up grind of “Ramblin Rose.”  Surfing a bone-shaking wave of sound, Kramer joyously belted out a raucous vocal, reeling off exhilarating solo licks on the Strat between verses.  Almost 50 years after Detroit’s original punks recorded their live debut album Kick Out the Jams, the evening already promised to live up to the MC5’s formidable legend.

“Kick Out the Jams” itself quickly followed, with Zen Guerrilla’s Marcus Durant taking over on vocals, channeling MC5 singer Rob Tyner’s throaty, soulful delivery, stoking us up to dance and shout along.  On this and “Come Together”, Kramer locked in with Soundgarden’s Kim Thayil for a meaty twin guitar punch a la Fred “Sonic” Smith; meanwhile, Faith No More bassist Billy Gould and Fugazi drummer Brendan Canty laid down deep irresistible grooves, vibrating human bodies and rattling the concrete floor.  This was hard rock honed to a keen point —  recklessly idealistic, the barbaric yawp of youth refined by decades of hard knocks, dearly bought wisdom, revived dedication to craft and killer instinct.  Plus the obvious determination to give the crowd a good time.

END_OF_DOCUMENT_TOKEN_TO_BE_REPLACED

Wayne Kramer, leader of Detroit’s proto-punk/hard rock band MC5, announces 35 North American dates for “Kick Out the Jams: The 50th Anniversary Tour.” Touring with the MC50 — which includes guitarist Kim Thayil (Soundgarden), drummer Brendan Canty (Fugazi), bassist Dug Pinnick (King’s X), and frontman Marcus Durant (Zen Guerrilla) — Kramer will be celebrating the landmark anniversary of the MC5’s incendiary debut album Kick Out the Jams and the release of his memoir The Hard Stuff: Dope, Crime, the MC5, and My Life of Impossibilities, to be published August 14 by Da Capo Press.

The North American tour begins in early September, after several European summer festivals, and culminates with an October 27th concert back where it all began: in Detroit in 1968, where Kick Out the Jams — recently cited by Pitchfork as one of the 50 best albums of the 1960s—was recorded live in front of a raucous home town audience at the Grande Ballroom on Halloween night. On the MC50 tour, Kramer and the band will play the album Kick Out the Jams in its entirety followed by an encore of MC5 material that will change each night …