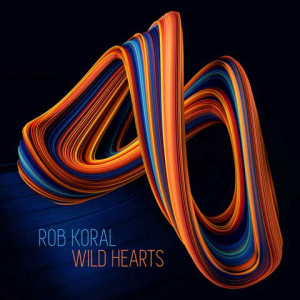 Part jazz, part classic rock, part blues, and all with a sprinkling of prog over the top for good measure. That’s probably the best way to describe Rob Koral’s new album, Wild Hearts. Rob has played on over 30 records, and he is most well known for his work with the band Sketch. He is also a founding member of the band Zoe Schwarz Blue Commotion.

The songs on Wild Hearts are very upbeat, reminding me a little of the first Jethro Tull record and of Blodwyn Pig. The music is relatively simple – guitars by Rob Koral, Hammond organ by Pete Whittaker, and drums by Jeremy Stacey. The album sounds extremely fresh, which is likely due to the group recording the songs live in studio on one day in December 2020. I think that approach is best for this kind of jazz-blues instrumental music. It begs for improvisation. Rob wrote all the music, but he says that he didn’t tell Pete and Jeremy what to play. The result is music with form that still breathes. You can even hear the little hand movements on the guitar strings and the little natural noises you would get playing live. There’s even a sense of space from the room the recorded the music in. These elements add warmth to the recording, as well as bring a vintage feel to the music.

The Hammond organ really makes this record stand out for me. It adds such a rich atmosphere to the songs, even when the guitar is taking center stage. The drums have a jazzy improv feel that sets the perfect stage for the guitars and organ. My only really critique is perhaps a little bit of repetition throughout, but that also may be a result of the album being recorded live in a day. As such it’s quite an achievement. In a way it feels like a live jazz show. A song like “The Beyond” especially has that feel of anticipation as the soloing switches back and forth between guitar and organ. The longer guitar solo builds gradually over a very simple but effective drum beat. It’s smooth with a little bit of grit on the lower ends.

Wild Hearts’ strength as an album is it takes jazz and rock and strips them down to the basics. There’s nothing overly complicated here, but the extended jamming gives the songs room to grow and breath. It’s a solid album that has a positive and upbeat tone to it, sure to please on repeated listens.