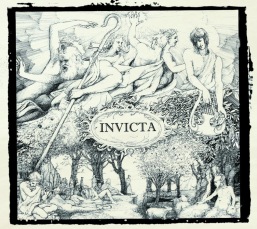 Before I start, I have a confession to make; or maybe claim a world record. I have gone a little while without going to an Enid gig. Thirty five years!!! It’s quite a lot really. The last time I saw the Enid in concert was at the Hammersmith Odeon in 1979.Three of the current band members were not even born. I used to follow them to every gig in the 70’s. When they played Newcastle Upon Tyne earlier this year I was on holiday so a three hundred mile round trip was quickly planned to make sure I didn’t miss out this time.

The Real Time Music venue in Chesterfield is a compact standing only (apart from a few tables and chairs at the side) venue with a decent size stage and good acoustics. Although nowhere near full, there was a good atmosphere and when the support band came on they were given a good reception.

The Tirith are a three piece band that started life in the 1970’s and have reformed to play some of the old songs and some newer ones too. Consisting of Tim Cox on Guitar  Dick Cory on Vocals, Bass and Pedals and Carl Nightingale on Drums, they played a nice set of rock tinged prog. They started with “Song of all Ages”  and by the time we got to “Daughter of the Water” the crowd were enjoying the well constructed guitar solos and sound textures from the flange, chorus and delay pedals. Towards the back end of the set they played a couple of acoustic numbers before playing the two best songs of their set. “Home from the Sea” and “Lost” They reminded me a little of Rush (without the high vocals) and a bit of Camel (without the keyboards) . Very nice and very enjoyable.

As The Enid took to the stage, I was well aware that the band had changed so much since I last saw them. They were an instrumental band then with occasional vocals from Robert. But as the opening timpani heralded “The Last Judgement” I was transported back in time to those early days. This led as usual into “In The region Of The Summer stars” and then I got to witness the new Enid as Joe announced the arrival of “One  And The Many on his MIDI Clarinet. On the new album “Invicta” his voice is amazing. Live, it is truly spectacular. He starts the song in a soprano voice sounding like a young chorister. It is pitch perfect and mesmerising. After seven or eight minutes he suddenly changes the style of singing to a more rock type of voice and when it happens it is truly stunning. For me, and I don’t say this lightly; one of the great moments in prog when this happens. If you have never heard it, I urge you to check it out on youtube or buy the track from your usual download outlet.

The band continued to play songs from the new album as well as revisiting songs from the 1980’s as well. Robert John Godfrey left the centre stage to Joe ( it was his birthday) and Jason whose guitar playing was immaculate. Dave Storey who is the only remaining original member with Robert, combined with Nick Willes to form a tight and powerful rhythm section. Max Read kept it all together with Background vox played through a keyboard (wonderful effect) and guitar playing. Robert is planning to retire from the band once a replacement is found for him. Of course he will be missed but I can see this version of the band carrying on for a long time.

This gig was prog at its very best. You can visit their site at www.theenid.co.uk to find out where they are playing in the next few months. You would be mad not to.