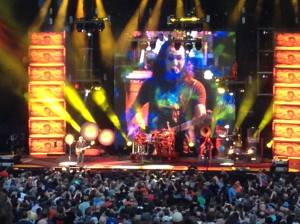 Spoiler Alert: If you are planning on attending an upcoming Rush concert on this tour and don’t want the setlist spoiled for you, then it’s advisable to not read this. But even if somehow the setlist does get spoiled for you? It won’t make any difference. It’s not the surprise of what they are playing on this tour that makes the show great – it’s that they are playing these songs. At that moment, you won’t be caring whether the surprise was spoiled or not, you’ll just be thrilled that you are there as a witness to greatness.

During the months from May through September, I usually welcome rain. Anyone who has endured the heat of a few central Texas summers (which start early and last a long time) will understand exactly what I’m talking about. But it’s important to remember the old saying about “be careful what you wish for”. We have received a much greater than normal amount of rain lately, including a torrential downpour the day before the show, and a good soaking rain on the morning after. But for May 16, the weather gods smiled upon us. The clouds did part, and legions of Rush fans were treated – and I do mean treated – to a concert for the ages in the relatively new outdoor venue of the Austin 360 Amphitheater.

In defiance of Albert Einstein, Rush started at the present and took the audience back in time, album by album, dusting off some long unplayed classics along the way. Of their 19 studio albums, 15 were represented in the setlist. Only Test for Echo, Presto, Hold Your Fire, and Power Windows were left unrepresented. Of course, that meant every album from their debut up to and through Grace Under Pressure had at least one song. It also meant that some classic albums, such as 1977’s A Farewell To Kings, had multiple entries in the set. And as the show closed, they even gave us a taste of a song that predates their first album.

Starting out with three songs from Clockwork Angels (The Anarchist, The Wreckers and Headlong Flight), the band then worked backward to Far Cry, The Main Monkey Business, How It Is, Animate, Roll The Bones (with some very entertaining video in the rap section), Between The Wheels, and closed out the first set with Subdivisions. It was a strong first half, and the inclusion of songs like Animate and Roll The Bones (which I had never seen performed live) and How It Is (never performed live before this tour) made it even better. The band was tight and yet having fun as well. But the best was yet to come.

The second half opened with Tom Sawyer (complete with the South Park introductory video), and things just got better from there. The first real stunner of the show came when the introductory synthesizers of The Camera Eye bubbled up from the background noise and led into another gem I had long wanted to see performed in a live setting. And man, did they deliver the goods. As the band played through the portion leading up to the first verse, fellow Progarchist Kevin McCormick turned to me and exclaimed on how “meaty” were the power chords of Alex Lifeson. Indeed, they were, meaty enough to throw on the grill and make a meal. The entire performance of the song was nothing short of scintillating.

Things just got better. After an obligatory (and excellent) rendition of The Spirit of Radio, we were treated to another rarely-performed-live gem: Jacob’s Ladder. After being threatened by the weatherman with real thunderstorms, this was the only one that actually occurred, and it was most welcome. By this point, my fellow concertgoers and I were beside ourselves with joy, showing our appreciation between songs with the same enthusiasm – and loudness – as we all must have at our respective first Rush concerts back in our teenage years.

The next one really threw me for a loop, as the band gave us a live performance of the first part of Hemispheres. Despite standing for the entire show, my jaw momentarily hit the ground when this one started. I was fortunate enough to see Hemisphere played in its entirety at my first Rush show in 1979, but I don’t believe they’ve played any of this epic since then. But on this night they did give us at least a piece of it, and the best part at that.

From there, they moved back to A Farewell To Kings, and gave us some instrumental sections of Hemisphere’s prelude, Cygnux X, Book I, with the song punctuated by a Neil Peart drum solo. Closer to the Heart followed, and after that, another highlight of the show for yours truly, Xanadu. Both Geddy Lee and Alex pulled out the double-neck axes for the performance of this piece, and had the donned their kimonos of the era, I would have sworn it was 1977 all over again. The irony was not lost on me that during a song about the inability to create Heaven on Earth, Rush seemed to do just that.

Following that, we were treated to Parts I, II, IV, and VII of their breakthrough classic, 2112. That led us to the end of the show proper, but there was no question that an encore was coming. As such, they closed out the show with Lakeside Park, Anthem, What You’re Doing, and Working Man – with a snippet of Garden Road thrown in for good measure. The show was over, but the euphoria was not. I cannot speak for the rest of my concert-going entourage, but despite being tired when I arrived home, it was only with great difficulty that I finally fell asleep. I was simply too wired from what I had witnessed – quite simply, the best Rush concert of the six I have been fortunate enough to attend, and one of the best (if not the best) concert of all those I have seen. There is some tough competition from a few Yes shows I have seen, but this one is definitely in the running for my best ever. And as much I have loved Yes for many years, there is no way at this stage that they could put on a show as incredibly fantastic as this.

Of all the progressive rock bands that emerged in the 1970’s commercial heyday of that genre, Rush truly is the last man standing. Yes is still around, but in a diminished form (and I mean no disrespect to current vocalist Jon Davison, who is a great talent). With the split between Ian Anderson and Martin Barre, Jethro Tull is no more. King Crimson s touring under the Mk 7,396 lineup – or is it lineup Mk 7,395 (King Crimson being the one band that could make a current or former Yes member exclaim “damn, that band goes through a lot of personnel changes!). And Genesis is long gone from their glory days of the Gabriel/Hackett era. But last night, here was Rush, still in the same form as they were when “new guy” Peart joined prior to their first US tour, still touring big venues, still putting on not just a concert, but a spectacular multimedia presentation that is beyond the reach of virtually any other prog band currently in existence. This leads me to a few additional thoughts.

Much has been written here at Progarchy and elsewhere regarding the changing of the music business and the effect of the internet on the same. For those of us who love prog, this has mostly been a boon, an incredible boon at that. The current prog scene is alive and very vibrant, matching the glory days of the 1970’s in terms of quality while overwhelming that era in terms of quantity. Back then, one could keep up with the new releases. Nowadays, there are simply too many.

But while the music industry has changed in many ways for the better of us prog fans, one of the few laments I have is that I won’t likely ever get to see many of the current acts I like perform in a live setting. I most definitely will not get to see them put on a show like Rush still does, in a larger venue with the lights and big screen video that enhances the concert-going experience. But rather than dwell on that too much, instead I will choose to be thankful. Thankful that I did get to experience such a thing. Thankful that in a 35 year span within their 40 years plus career, I’ve been lucky enough to have seen Rush six times, and thankful that one of my favorite bands of my youth is still relevant, perhaps even more relevant.

This wasn’t lost on me as I thought about some of my fellow concert goers. The group with whom I attended ranged in age from 15 to 50 (with yours truly being the geezer of that bunch). The two youngest members of the group have not been alive long enough to experience many concerts of this magnitude, and with the change in the music industry, will probably not experience too many more, unless they want to see record company creations like Taylor Swift and Katy Perry. For them, they were fortunate enough that they were able to see this show, and in time, they will realize how lucky they were.

For the older members of the entourage, we are lucky that we have been able to follow Rush for decades, much longer than most bands ever last. We have seen them continue to stay relevant and make music of the highest excellence through shifting musical trends and technological and economic currents that have upended the music business, morphing it into something unimaginable when they first started. Consistency and excellence, fueled by integrity that allowed them to benefit from the old order without being swallowed by it. And for that, they were able to give us, the fans, a career retrospective that will not soon be forgotten, and one that they seemed to enjoy playing as much as we enjoyed witnessing. Just as Geddy thanked us fans before leaving the stage the final time, let me turn around and say Thank YOU, Geddy and Rush. While I don’t like to presumptuously speak for others, this is one time I’m confident I’m speaking for everybody who had the good fortune to be there last night. 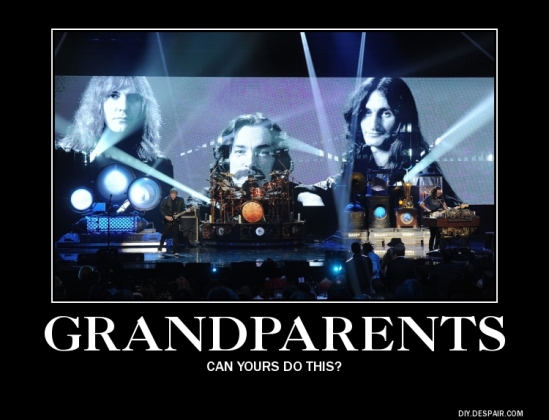