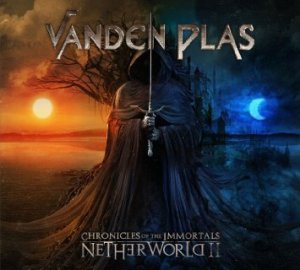 German prog metal outfit Vanden Plas recently released part two of their masterpiece, “Chronicles of the Immortals: Netherworld.” Part 1, released last year, was one of my top albums of 2014, and Part 2 has already promised to be high on this year’s list as well. Since the release of Part 1, I have had the chance to delve more deeply in to this amazing band, and I have not been disappointed. Everything I have heard by Vanden Plas has been stunning. They take their work very seriously, and they put their all into everything they do.

So who is Vanden Plas? Stephan Lill on guitars, Torsten Reichert on bass guitar, Andy Kuntz on vocals, Andreas Lill on drums, and Günter Werno on keyboards. Every member of this band is at the top of their game. Stephan Lill’s shredding on the guitar is mind-blowing, and Werno’s keyboards rank with the best efforts of any of Dream Theater’s outstanding keyboardists. Above all, however, soars Andy Kuntz’s spectacular vocals. In my opinion, he has the best voice in progressive metal, by a wide margin. He is smoother than James Labrie (who often fails to recognize his own limits), and he brings more power and clarity to the lyrics than any other metal vocalist I have heard. He fully recognizes his range and ability, and he does not try to exceed it, which may explain why his voice still has such power after years of singing metal. Also, the fact that he doesn’t scream probably helps too.

Truth be told, after being blown away by Part 1, I was a little apprehensive about hearing Part 2. I wasn’t quite sure that Vanden Plas could equal Part 1. Thankfully, I had nothing to worry about. Part 2 is every bit as good, maybe even better. It picks up right where Part 1 left off, with a few seconds of quiet followed by roaring and driving metal riffs, symphonic epic-ness mixed with choral beauty, and continued female vocals from someone whose name I can’t find anywhere. She sang on Part 1 as well, and her voice matches Andy’s perfectly. When they sing together, the angels themselves stop to listen. Vanden Plas perfectly straddle the zone between heavy metal, prog metal, and progressive rock. They can be heavy one minute and hauntingly beautiful the next. The way in which they do that is simply breathtaking.

The story itself (since this is a concept album, after all), is based off of the highly successful novels written by German author, Wolfgang Hohlbein, who helped write the lyrics for both albums. He happens to be a big fan of Vanden Plas. The story itself is really difficult to nail down. I’ve been listening to Part 1 regularly since it first came out, and I still struggle to figure out what the heck is going on. That fact is remarkable, considering how catchy their music is. I’ve probably annoyed the crap out of my roommate by singing along to these albums. The whole story is about a vampire and his cohorts traveling through Europe in an attempt to discover the truth of their origins. I feel I am doing you a disservice by not detailing the story a little more, but I’m having trouble finding a clear narrative, likely since it is a German band. The lyrics are in English, but I don’t think the books have been translated. Nevertheless, the vagueness of the story (for me, at least) makes listening to the albums that much more interesting because I discover something new with every listen.

Obviously, Part 2 picks up where Part 1 left off, with the numbering of the protagonist’s “visions” picking up at eleven. This is another long album, but it never drags on. In fact, like at the end of Part 1, I am left wanting more at the end of Part 2. The crunch of the guitars, the wail of the bass, the skill of the drums, and the atmosphere of the keyboards, all layered with Andy’s voice, as well as choral and orchestral additions, makes “Chronicles of the Immortals: Netherworld” a joy to listen to. These two albums just don’t seem to get old.

I’ll warn you, if you have never listened to Vanden Plas, start with Part 1, and then listen to the new album. Musically, it will make more sense, since the band reintroduces motifs in Part 2 that were developed in Part 1. While I have yet to hear a bad album from this band, the Chronicles of the Immortals saga takes their playing and storytelling to a whole new level. Unlike some metal bands, who often try to experiment with too many different sounds, Vanden Plas have firmly discovered/created their sound, and they don’t deviate from it. This ensures that they don’t have catastrophic failures when experimenting with a new sound. After all, why mess with a sure thing.

If you are a fan of progressive metal, symphonic prog, metal, or just amazing music, check out Chronicles of the Immortals, parts 1 and 2. It is well worth your time. I don’t normally rate albums here on Progarchy, but I am giving this one a solid 10/10.

One thought on “Vanden Plas – Another Stroke of Genius”