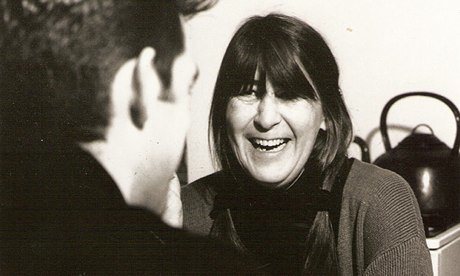 One of the few individuals who could lay any real claim to being essential to the British folk revival, Elaine “Lal” Waterson lent her unique voice — absolutely beautiful and instantly recognizable — to the records she and her brother Mike and sister Norma made as The Watersons, defining the passion and respect necessary to performing traditional material while opening up the freedom and possibility such songs allowed. Although a tremendous songwriter in her own right, she wrote sparingly, and before her death in 1998 created only a handful of records. “Midnight Feast” is from 1996’s Once in a Blue Moon, a collaboration with her son, guitarist and producer Oliver Knight.  It is an unusual record; Knight’s inventiveness as an electric guitarist gives the album a consistently full and yet uncluttered sound, supporting his mother’s poetry and voice, highlighting her artful, at times jazz-like, delivery. Indeed, in tone and mood there is nothing so much like this album as Abbey Lincoln’s 1959 landmark Abbey is Blue, in its grooves an acknowledgement of the fullness of life, with its travails and its joys.  A profound wisdom at work, speaking of the deeper mysteries.

Once in a Blue Moon at Amazon