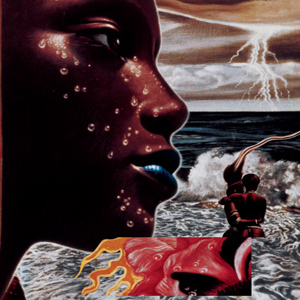 It’s unavoidable.  It is impossible to speak of modern music, regardless of genre, and not take note of the critical importance of Miles Davis.  Call him what you will or what he called himself — a genius of composition, a dazzling trumpeter/performer and band leader/manipulator, an agent provocateur, a counter-racist, coke fiend, pimp, misogynist — Miles Davis was to musical art what Pablo Picasso was to visual art in the 20th century.  It’s so true it’s not even up for debate, and there’s about a kazillion hours of recorded, generous, lovely, dark, funky, bopping proof.  By natural extension Davis was the incarnation of what Ravel’s Bolero was all about — schooled freedom, the connection of craft and wild will, the fearlessness to create shit one second and be the divine and golden voice of the Spirit the next.  By the time Miles Davis released Bitches Brew in 1970, he’d been creating killer jazz for over 20 years, had broken from the pack a decade earlier with the “modal” music of Kind of Blue (1959), and had crafted blueprints for psychedelic and progressive rock in the music he created between Sketches of Spain (1960) and In A Silent Way (1969).  He was a complete musician who, difficult as he was, found sympathetic producers, promoters, and partners who fed and nurtured his bright flame.  As we find him on “Spanish Key,” Davis’s work is still melodic, free and open, but deconstruction is increasingly what he’s about — he’s using the studio as an instrument, playing less, knitting together jams, finding the overlap of blues and jazz and funk, Waters and Ellington and Brown. He was 44 years old, electric with creativity and swaggering with confidence, inspiring and inspired by rock’s reach towards jazz through Hendrix and Santana the Family Stone.  But for all the trappings of the rock band that he took with him to the stage, he never yielded, in the sheer sonic amplified power, any of jazz’s mysteries and his own mastery.  He delighted in pointing out that he could go to rock, but rock could not come to him.  It’s certainly true, to the extent that Miles Davis had a transcending vision and the untameable talent to back it up.  There is not another record in jazz or rock like Bitches Brew, and there never again will be.  It is a difficult, beautiful ride.