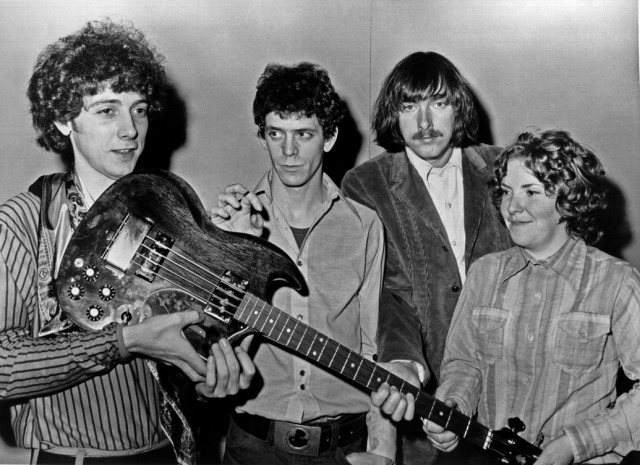 Outside the fact both groups employed players of a violin/viola in their lineups at one time or another, and possessed songwriters of legend, you’d be hard pressed to find common ground for Fairport Convention, last week’s soundstreamsunday feature, and the Velvet Underground.  But in an imaginary Venn diagram of live rock jams from otherwise non-jammy groups circa ’68-’72, Fairport’s scratchy, chugging take on “Matty Groves” would share a noisy, electric segment of that interlocking circle with V.U.’s live work during the same period.  In 1969 the Velvets, with aforesaid violist/bassist John Cale one year gone and a third album released (The Velvet Underground), recorded a handful of shows in Texas and San Francisco, showing an energetic, touring rock outfit whose songs of hustlers, dopers, and beloved Factory freaks worked even without Cale’s avant-garde contributions.  Indeed, Cale’s replacement Doug Yule, doubling on organ, more than adequately filled in Cale’s creeped-out carnival viola drone. The tapes — unreleased until 1974’s 1969: Velvet Underground Live with Lou Reed (the full two-night run at San Francisco’s Matrix was released in 2015 in pristine glory and it is mind-blowing) — like the rest of their music, hold the seeds of punk.  But beyond that, the jams they insert, not part of the studio versions, have a live inventiveness and melodic sensibility that rank among the finest of their long-haired time.  On “I Can’t Stand It” — in its studio incarnation a proto pop-punk nugget of the variety the band could so effortlessly summon — the band opens up space for an extended guitar section that takes cues from Jim McGuinn’s intro to “Eight Miles High” and pushes its Coltrane-inspired riffing into the stratosphere. Mo Tucker’s relentless pounding and Yule’s bass background the song, never allowing the guitars of Lou Reed and Sterling Morrison to disintegrate into wandering exploration.  This is a lean-and-mean live band unharried by the legend they would become (Tucker has even noted that on this tour audience members would tell her they couldn’t even find the band’s albums for sale), at a time when rock-n-roll was meant to be rough around the edges, and maybe even exact a toll.