A droning electronic synth with some tinkling bell noises starts of the first 40 seconds of the opening track ‘Book of The Dead’ (3:34) until joined by some synth strings. The tune sort of meanders around on a two to four note theme that is somber and quirky…until at the 2-minute mark there’s a loud KING CRIMSON-ish crescendo of drums and more synths. This is followed by some nice runs of analogue sounding effects that made me think of Klaus Schulze and “Timewind.” This cool opening song ends with some bird noises.

The dueling riffage between the organ and axe at the end of track 2, ‘Kill the Slavemaster’ (6:04) caps off a rollicking and galloping “desert” rocker that is loaded with stoner vocals, synth horns and a section with enough chimes and keys to verge into Jazz fusion. This is a beautiful example of “throwback” (i.e. retro) psych/sludge that brings to mind newer bands such as Purson, Orchid, Kadaver, or Uncle Acid. There is a kinship between this type of protégé of Sabbath and harder prog.

‘Searching’ (5:29) with its hard-rock opening continues the Black Sabbath vibe (minus Iommi) with its chugging and relentless guitar & bass propelling it along in a way that made me think of an “amped up” Steppenwolf. The song ends with a few seconds of outer space beeps and bleeps effects noises.

As a big Lovecraft fan (the author more so than the band) I was predisposed to like track four on its title alone: ‘Dweller of the Twilight Void’ (4:01).  And though it wasn’t quite what I thought it might be it was still a strong offering. The nice slow guitar at the start is joined by the harmonizing of Brandon, Lisa, and Michael in a mournful dirge like vocal. At the end of the piece the nice use of Lisa’s mellotron and synths deliver a spacey “prog folk” meets “Forbidden Planet.”

Though the first four tracks might have a dearth of some of the classic components many proggers look for in their music, the final track with its epic length of 27 minutes should win Eye some bona fides points. ‘As Sure as the Sun’ (27:11) starts with a brief soft acoustic guitar with a babbling brook of water that almost brings to mind Rush and 2112 (you know the section). This bubbly and dreamy opening is joined at 2:45 with some soundtrack “cue” music heavily topped with mellotron and synths. The whole album is infused with tasty shredding by John Finley, and he really shines on this closing monster of a track. With the changes in tempo and the mixture of vocals, the song images early Nektar and early King Crimson before it shape-shifts off to honor some more of the bands’ 70s heroes. For what it’s worth I heard what made me think of Robin Armstrong’s Cosmograf at 10:30. 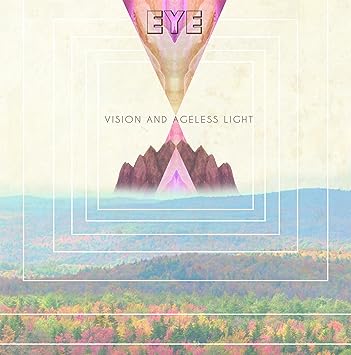 Derivative or homage? I think the latter. This is like early Pink Floyd meeting Blue Cheer with a seltzer of Anekdoten shot on the top. If you like Krautrock and the burgeoning revival of sludge/psych prog of the many bands that I’ve mentioned, I really think you should give Eye your ear. “Vision and Ageless Light” can be streamed at Bandcamp, and the group can be followed at Facebook. I find the album very enjoyable, playful, and worth listening to again.  7/10