Over the past several months, I’ve been rather taken with Pink Floyd.  Don’t get me wrong, I’ve always loved the band. . . as far back as I can remember, their music was a part of my life.  Certainly, in my little town in central Kansas, I could hear someone or some station playing Floyd at any time.  As I’ve had the chance to mention before, our local planetarium played lots of Laser Floyd.  I heard them so much and so often that I started to take them for granted.

Several months ago, I picked The Wall up after years of not listening to it.  There was a time I thought it was a masterful work of art.  I still think it’s brilliant, but it’s way too depressing for me to pick up casually.  If I’m in a good mood, I certainly don’t want to be brought down by the album.  If I’m in a bad mood, I don’t need it to bring me down any further.

There’s no doubt, however, that its message of anti-fascism and anti-conformity influenced my own thinking on the world profoundly.

Recently, I’ve become rather obsessed with the 1972 live concert, PINK FLOYD LIVE AT POMPEII.  As a high schooler, a good friend and I had watched the show often on his Laser Disc player, perhaps the only one in town.  His dad owned the local stereo shop, so we definitely listened and watched on some very high quality equipment.  The setting and the empty colosseum moved me then, and it moves me now.  There’s something utterly profound about watching a modern rock concert performed to a dead audience in a long-forgotten classical city.  No ghosts appear during the performance, but I’m sure they haunted the entire area and wondered what four Englishmen and their tech guys were doing, making such a racket.

So what does this have to do with Talk Talk, you’re asking.  Right?  Ha.  You didn’t see that one coming.

There’s a moment in a Talk Talk video when Mark Hollis screws up the lyrics of one of their early pop songs, “Dum Dum Girl,” and he explains in his very English manner that he feels like a member of “the Pink Floyd.”  I honestly have no idea what he meant by that, but I remember thinking, “Ah, ha, Talk Talk is progressive.”  Pretty thin evidence, I admit.  At one point in my life, however, that label meant every thing to me.  If it wasn’t “progressive,” it was just fake, corporate music.  Oh, to be 18 again.

There’s another connection as well.  Richard Wright considered Talk Talk’s third album, THE COLOUR OF SPRING, to be one of his favorites.

The simplicity of the songs and Mark Hollis’s voice make this album just incredible. The first tune, Happiness Is Easy, says it all – nothing but a bass, a snare and a weird chord. That’s Talk Talk all over, great songs and simplicity with a twist. Pink Floyd have never done anything that straightforward, except maybe Wish You Were Here, because I tend to put a lot of sound colour into the music. In some ways this type of stuff is much more brave, because there’s absolutely nothing to hide behind. Why does it touch me? Hard to say, but it’s got the feel good factor, which all my favourite records have. I wouldn’t choose anything that didn’t make me feel happy.–Rick Wright

One of the things I like best about pre-1973 Floyd, I now realize, is its very Talk Talk-ian quality.  Unlike on later albums, pre-1973 Richard Wright plays a huge and rather glorious role in the band.  And, it’s really a band, not just a backup gig for Roger Waters.  Waters is critically important, too, prior to 1973, but only as one-fourth of the band.

Wright shines at Pompeii.  His psychedelic and moody keys allow Gilmour and Waters to offer and give their best.  The essence of a band, right?

As I watch Nick Mason play drums, I also can’t help but think of Lee Harris, Talk Talk’s drummer.  Quite different from a Neil Peart, both Mason and Harris can keep an amazing beat going.  Nothing fancy, but totally reliable and steady.

Well, this takes me back to Pompeii.  I couldn’t even count how many times I’ve listened to “Echoes” over the last three months.  Almost non-stop.  I’m no where near listening to “Echoes” as much as I’ve listened to side one of SPIRIT OF EDEN.  But, the count is getting closer and closer. 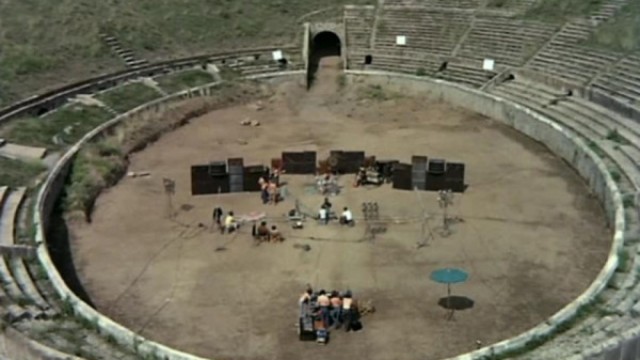 One thought on “When Pink Floyd was a Classic(al) Band”