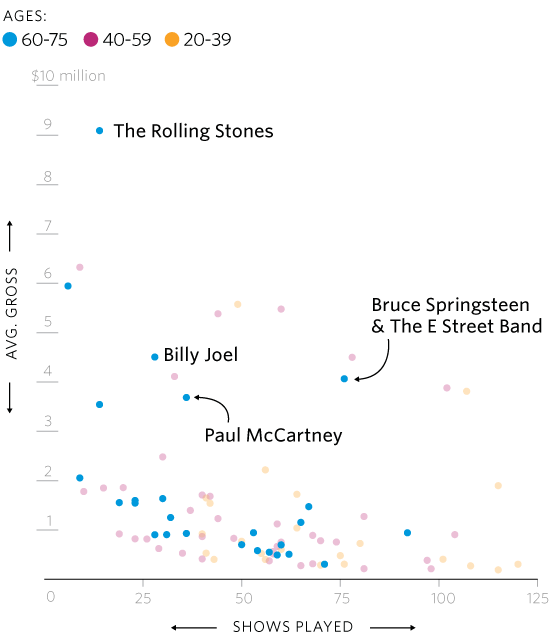 The WSJ has the data. As one generation slowly dies off, the next generation has no comparable stars to fill the void. The result? The disappearance of rock and roll as a cultural phenomenon. In other words, music is just not as important in the lives of the younger generation. We are witnessing the twilight of the rock gods:

But with many of rock’s founding fathers and mothers reaching their 70s, the end of the age of rock ’n’ roll is just beginning. While every generation bemoans the passing of its great artists, the outsize influence of rock promises to have a profound impact on popular culture and overall music-industry sales.

Of the 25 artists with the highest record sales in the U.S. since 1991, when reliable data first became available, just one—Britney Spears—is under 40, Nielsen data show. Nineteen of the 25 are over 50 years old.

Boomer rock stars are in a league of their own, the products of an exploding record business that minted celebrities at a time when celebrity was less common. Rock’s heyday is hard to fathom: Unlike jazz and classical music, which became niche businesses after dominating mainstream pop culture, rock was the first musical genre to become a huge, multibillion-dollar global industry with staying power.

A confluence of technological, cultural and musical forces in the middle of the 20th century led to the modern pop/rock industry. Record players, a fixture in most American homes by the late 1960s, let America’s restive youth listen to music away from their parents.

Much of rock’s commercial success was possible because of the way the industry was structured. By the 1980s, cash-rich major labels were helping finance tours, throwing money at fledgling acts and investing huge sums in veteran stars even when their careers floundered.

Such investments—equivalent in spirit to the R&D expenditures of pharmaceutical firms—helped artists build enduring brands and transformed superstars into major corporations that overshadow young pop/rock acts even today.

Because of the multiplicity of entertainment options today, reduced attention spans, personalized tastes and less record-label support, most of today’s artists will never be as big as yesterday’s rockers.

Radio used to have the power to make even a lower-quality rock release popular. However, the fragmentation of the music industry—fans using multiple formats and splintering across rock, hip-hop, country and electronic music—means most acts will never find the same big audiences.

Younger fans have less cash to spend on traditional concerts, so they’re drawn to festivals, which provide a cost-effective way to see over 100 acts.

It’s unclear whether today’s younger touring juggernauts will, like the Rolling Stones, rake in more money when they’re older. “I can’t say Drake or Justin Bieber will be selling tickets 30 years from now,” says Gary Bongiovanni, Pollstar’s editor in chief. “There is not a lot of evidence showing that many younger acts are developing the staying power of the boomer bands,” he says.

2 thoughts on “Rock and Roll isn’t Dead, But It is Dying… Right in Front of Our Eyes”