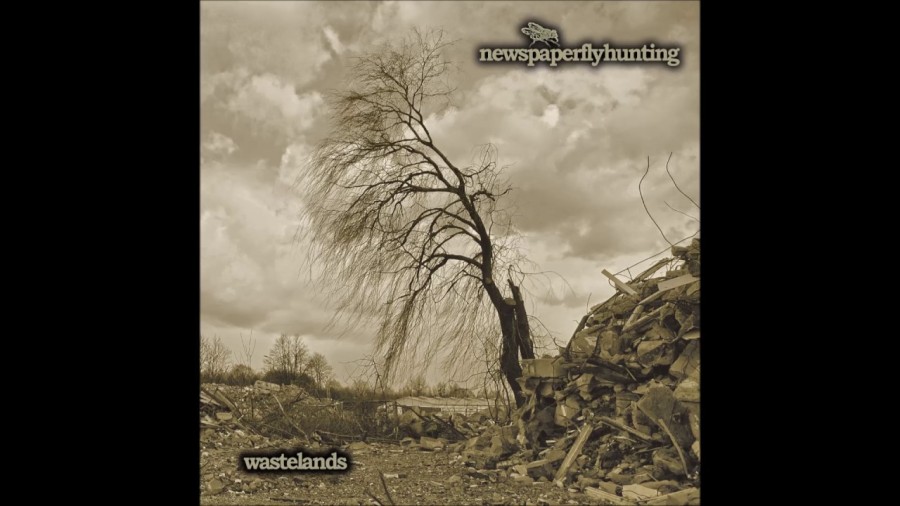 There are few things in the world of music more pleasurable to me than listening to the philosophical-art-drone-wall of sound-innovations of Poland’s newspaperflyhunting.  The band is probably the greatest unknown band in the world.

Yet, they do nothing if not without utter and complete excellence.  So very prog.

To my shame (and business), I have had their latest album, WASTELANDS, for a few months now without formally reviewing it.  Admittedly, I’ve been a bit selfish, hoarding this grand and glorious music all to myself.

“Confession time, Bradley!”  At least this is what I hear my maternal grandmother telling me from Catholic heaven.

Ever since our own beloved editor, Craig Breaden, introduced me to the band with a previous release, ICEBERG SOUL, I’ve been smitten.

Again, this band should have a major world-wide fan base.

I will admit some bias in what I write.  First, I’ve been taken with Poland, Polish culture, and the Polish people as far back as I can remember.  Yes, I’m sure this was much influenced by the election of Karol Wojtyla to the papacy when I was in fifth grade.  At that point, all Polish jokes became forbidden in our house.  Of course, if you ask the American press this week, they’ll tell you that only extreme Right-Wing historian buffs like Poland.  Sigh. . .  back to non-convoluted reality.

As a historian (am I a buff?  I’m certainly not buff!), I can state with some theological certainty, Poland exists to teach the rest of us perseverance.

Second, I can hear the care and quality of the musicianship and writing in every note newspaperflyhunting plays.  There’s a delicate power and fragile beauty in every moment of wastelands.

I don’t have the lyrics in front of me, but I assume that the album’s title refers to the Waste Land of King Arthur or of T.S. Eliot (itself, a reference to Arthur).

We search for the Chapel Perilous and the spring to come.  Do the hours pass?

Eight songs make up the beauty that is WASTELANDS–We Used to Wander; Wastelands; A Question; Down the Steps; Sleep; Equal to None; Hours Pass; and Solaris.

The wall of sound continues from the opening moment to the last moment, but the delights that spring forth from this wall are many and variegated.  Guitars linger, bass rides, voices unveil, keyboards highlight, and drums keep the time in the timelessness of the music. Strange instruments emerge unexpectedly at the moments most needed and most desired.

Between tracks three and four the wall subsides for a bit, only to introduce the listener to yet more and greater beauty, the earnestness of a naked guitar and the aching desires of the female voice at its most perfect.  As much as I love walls of sound when done well (and newspaperflyhunting does them VERY well), it is the unexpectedness of track four, “Down the Steps,” that attracts me most, and, frankly, take this album from excellent to extraordinary.

That wall subsides yet again for track six, “Equal to None,” a song so hauntingly gothic that even Stephen King might shudder.  The lyrics to this track are profoundly personal, a song of things that might have been but were not.

Track seven, “Hours Pass,” properly tells us, after all the personal angst of track six, that no matter what, do your best and accept the life that is given and the death that is dealt.  In other words–whether I look for it or not–this Polish band meets my expectation of all things Polish–persevere.

As Craig and I have both argued before, there’s a quality to this Polish art-rock that reminds us of Mazzy Star and other lush pop bands of the early 1990s.  Yet, newspaperflyhunting is always its own band, owner of its own sound.  Proudly so, as they should be.

Again, let me state: it’s criminal that this band is not better known.  They should be on the cover of PROG, at the very least.  This has been a great year for those of us who love innovation and depth in our music.  Newspaperflyhunting’s latest, WASTELANDS, is certainly a top three album of the year for me.  At least as of this seventh month of 2017.

2 thoughts on “Do Hours Pass? The Timelessness of Newspaperflyhunting’s WASTELANDS”