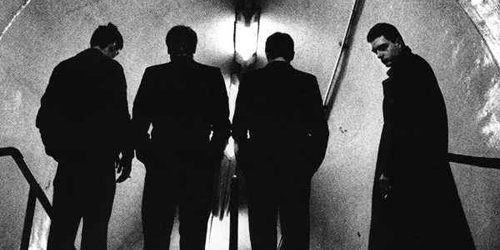 Music critics tend to dismiss Joy Division’s posthumous Still as a hit-and-miss collection of studio scraps paired with a lackluster recording of their last show.  And in a specific context — compared to the brilliant Unknown Pleasures and Closer, it seems a bit of a rush job with less-than-pure motivations — this holds some weight, although I’d argue as its own thing Still may be more representative of the band as a whole, and that the live half of the double album contains fiery performances wildly joining hard rock, punk, and synth-y goth music.  My first exposure to Joy Division, over thirty years ago now, was hearing “Shadowplay” from Still, and it gave me the metal thunder frights.  It sounded as if Peter Hook, Bernard Sumner, Ian Curtis, and Stephen Morris channeled the essence of Fleetwood Mac’s “Green Manalishi” through a punk filter, as they sped to the center of the city in the night.  Even as they rode their wave of goth punk popularity their songs betrayed the band’s primary strength: their music was as much about making connections as alienation, masked and revealed in turns by Curtis’s not-waving-but-drowning lyrics and delivery.

When Curtis made good on the promise of his lyrics a few days after the show, the band pivoted into New Order and went on to define electronic dance music in the 1980s.  It’s a remarkable story of artistic continuity in the wake of tragic change, but the strength of the group’s trajectory even before Curtis’s death can be found on Still and on “Isolation” in particular.  Stripped of producer Martin Hannett’s carnivalesque studio tweaks, the song’s live incarnation has a punch lacking on Closer, with Sumner’s keyboards threatening to submerge Curtis’s plaintive singing, and Hook’s and Morris’s stripped bass-and-beat backbone out-crafting Kraftwerk.  The big guitars so much a part of their origins were yielding to distilled, synth-led rhythmic and melodic lines.  While “Isolation” would sit comfortably next to its future cousin, the New Order calling card “Blue Monday,” it remains a place of passage rather than a destination, a liminal space aglow with potential.

One thought on “soundstreamsunday: “Isolation” by Joy Division”