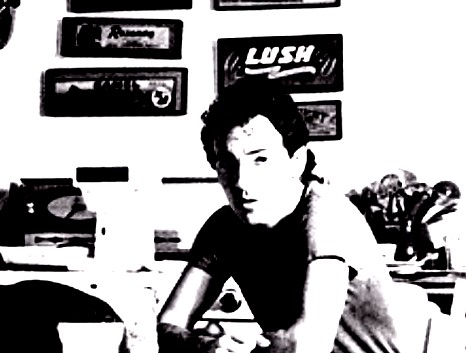 In 2014, Bruce Springsteen covered Suicide‘s “Dream Baby Dream” on his album High Hopes, revealing common roots among artists you wouldn’t normally associate, and further illustrating Springsteen’s connections to the New York art punk scene of the mid and late 70s.  His association with Patti Smith, through her interpretation of “Because the Night,” cross-pollinated rock and punk in a critical cultural moment.  Then in 1980 Springsteen and Alan Vega of Suicide struck up a friendship while both were recording their respective albums in NYC, and he lent Suicide much-needed support when their second album elicited nothing but stony silence from their label execs.  He later likened Vega’s voice, admiringly, to an exhumed Elvis.  Springsteen’s rise to bona-fide-and-sanctified rock star in the mid 80s tends to mask that his rock and roll roots were essentially punk, street, to the degree that the nickname he earned early on in his career never sat well with him.  He read in Elvis and the Sun brethren an unseating of authority.  He was seduced, romanced by rock’s exalting of the everyman, and he built his songs from a society of sympathetic blue collar and rural down’n’outs that appeared fully sketched on record.  This was and is his art.

“State Trooper” from Springsteen’s Nebraska (1982) most immediately links his work and Suicide’s, the acoustic blues rock stutter as lean as the song’s words, here exercised in relative economy (compared to, say, “Thunder Road” or “Blinded by the Light,” or, god forbid, “Rosalita”).  The lo-fi slapback echo combined with the aesthetic of the cassette multitrack Springsteen was experimenting with to make demos — which he then decided to release rather than flesh-out with his E Street partners — smacks strongly of cheap electronic processing and a reaching towards Suicide’s elemental synthesizer rock.

Both Springsteen and Vega were writing characters deeply steeped in rock’s first wave, but the innuendo is gone, so that Suicide’s Frankie Teardrop and the first person of “State Trooper” — who’s holding on to that thing that’s “been bothering me my whole life” — share a spinning endgame.  “Mister State Trooper, please don’t stop me…” is a plea to limit the damage that’s grown out of control, the high-pitched yawp at the conclusion, overloading the mic and my circuits, forever linking Springsteen and Suicide in a stylistic rock’n’roll entirety consisting of a road, a car, probably a gun, and not much time.