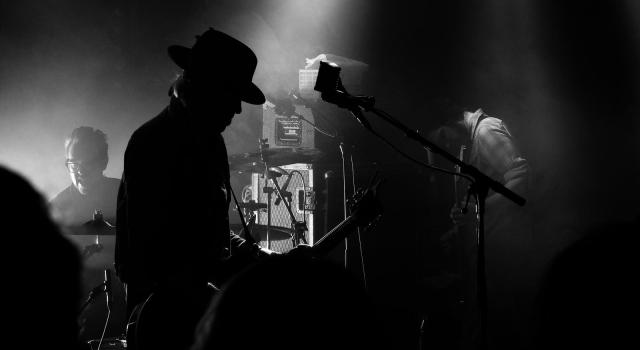 Like Robin Pecknold of Fleet Foxes — last week’s soundstreamsunday entry — David Eugene Edwards brings to American folk, rock, and country an utterly unique, instantly recognizable voice.  Unlike Pecknold, Edwards toils in relative obscurity, which is a shame, as for the last 20 years he’s brought a wide-eyed intelligence to songs extending darker traditional themes, shimmering with christian imagery, to bracing goth soundscapes.  While you could make favorable comparison of Edwards’ bands, Denver’s 16 Horsepower and Wovenhand, to Nick Cave’s Bad Seeds, the better starting point, should we need it, might be Cormac McCarthy’s Blood Meridian, or perhaps the old testament.  Or Carravagio.  With a voice both commanding and vulnerable, Edwards brings to his arrangements sonic chiaroscuro, breathing life, momentum, and dimension across acoustic and electric instrumentation tuned to his songs’ subjects.  Compositionally, he is a painter looking, I think, for balance, perhaps reflecting his relationship with his faith.

“Oil on Panel” is from Wovenhand’s third album, 2004’s Consider the Birds.  Referencing the act of painting, three of the deadly sins, Roma, and Yeshua, the song captures the direction Wovenhand was charting as it set out in the early aughts, into-the-christian mystic, highly refined, mannered, powerful.  With a windy, buzzy ambience overlayed with piano and distant strings, the song blossoms into near-orchestral grandeur halfway through, Edwards telling a story heavy with images invoking less a narrative than a feeling, of being unmoored, freighted with guilt but defined by faith.  If the edges bleed it is not without purpose.  “I paint them roughly, I paint them in my sleep.”

*Image of Wovenhand in concert by Colin Gentile, 2015.