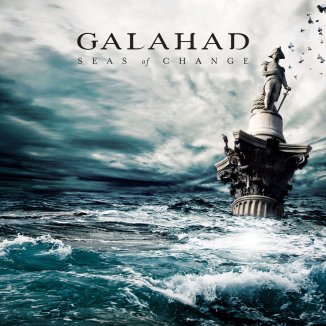 Based in the same county in southern England as Big Big Train, the backstory of Galahad could be a prog prototype for Spinal Tap.  In the 30 plus years the band has been together, there has been more than a fair share of drama – multiple personnel changes, mayhem on the road and alas, tragedy.

But this is a band which lives up to its name by being bold and courageous, not afraid to take a few risks and break taboos along the way.

Central to all the band activities is Stu Nicholson, the band’s vocalist, lyric writer and spokesperson, who is the only original member and who once auditioned for the vacant singer’s berth in Genesis.

Stu has seen it all and, despite  the band going through so many changes, he has kept his focus throughout – and his sense of humour. He is also a very shrewd observer of life as his lyrics and many personal conversations I have had with him have revealed.

Going back to the risk-taking, having found a kindred spirit in keyboards maestro and composer, Dean Baker.   He has played a huge part in several of their most recent albums. Among them are their two 2012 studio albums Battle Scars and  Beyond The Realms Of Euphoria that certainly raised a collective prog eyebrow when they introduced elements of electronica and dance-trance as a major musical theme. But for anyone who has had the pleasure of hearing these highly crafted and imaginative albums, they are a delight. And they came at a very difficult time in the band’s history through the untimely death in 2011 of their much loved bass player Neil Pepper, around whom many of the songs on Battle Scars revolve.

The band continued with Mark Spencer (Twelfth Night, Alan Reed and The Daughters of Expediency) appearing on bass for their ensuing live gigs, culminating in a glorious 30th anniversary concert in 2015 at the soon to be defunct Mr Kyps in Poole, Dorset, close to where they live.

However, entry to their fourth decade was about to take another interesting twist as their long-time guitarist, Roy Keyworth, went incommunicado, so the band carried on regardless, supported by their producer/occasional guitarist Karl Groom. They released Quiet Storms in Spring 2017 which showed a more reflective, introspective side of the band.

To replace Keyworth, they turned to one of their previous bassists, Lee Abraham, who was establishing himself as a solo artist with a canon of excellent albums such as Black And White, The Seasons Turn and the new release, Colours, to his name. 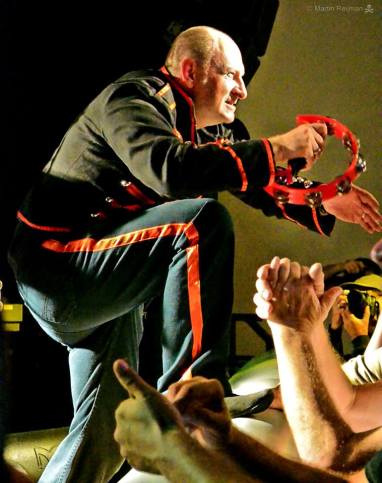 Abraham was safely back in the Galahad fold so what comes next?  Simple – an album about the effects of politics!

Effectively, what started out as a song idea suddenly elongated itself into a 42.43 minute epic in 12 movements, entitled Seas Of Change. Like millions of others domiciled in this scepter’d isle, Nicholson has been having a devil of a job trying to get his head around the whole concept of the United Kingdom holding a referendum in which the people voted, the majority opting to exit the European Union, a decision which has completely rocked the constitutional certainties of this land to its very core.

It was that thought process which sowed the seeds for Seas Of Change  with Baker’s orchestration and programming putting Nicholson’s probing lyrics into some musical context. Then add the considerable talents of Abraham, stalwart drummer  Spencer Luckman and current/previous bassist Tim Ashton, together with the impeccable production of Groom.

You only have to look at the cover, depicting rising sea levels about to completely obliterate one of England’s most iconic landmarks, Nelson’s Column in Trafalgar Square, London, to get a measure of the message within.

There’s a deep, sustained mellotron at the opening of Storms Are A Coming,  followed by a radio broadcast featuring News Reader Andrew Wild (Galahad’s official biographer). This leads to a wonderful classically inspired piano and orchestrated sequence from Baker featuring angelic voices, ending with the sounds of a bar-room conversation.

Cue Lords, Ladies And Gentleman, a short, pointed speech made by Toastmaster, Peter Watson, inviting listeners to be upstanding for “total confusion, served up with a healthy smattering of understated incredulity, topped off with a healthy dose of utter bemusement.”

Nicholson is not preaching politics through his lyrics. He uses the musical soundscapes to deliver his interpretation on the uncertainty the current political landscape is presenting.

“So many seeds of change are a coming, blowing in on the cold winds of change“, he opines in The Great Unknown. Add to that a superb Gilmouresque guitar from Abraham and the whole sequence captures a Floydian Utopian mood so beautifully.

They  introduce a characteristic Galahad sound of a spectacular guitar/keyboard duelling riffage and this interplay between Abraham and Baker, underpinned by Luckman’s metronomic drums and Ashton’s pulsating bass is pure magic. There are even some Yes/Queen inspired vocal interludes for good measure.

The whole vibe chops then changes to depict the shifting tide of politics, this terrific interlude morphing into something darker and deeper in Sea Of Uncertainty, as Nicholson points out: “Some are rejoicing and some are in tears, some full of fear“,  a trademark Galahad melody providing the perfect counterpoint to Nicholson’s expressive voice.

Galahad never forget where their roots lie and there is a direct reference to Genesis’s Dancing With The Moonlit Knight in: “And as time fades and calms the furore, We’ll all be citizens of hope and glory,  Whether red, yellow, green, orange, purple or Tory,” lines that will be further repeated with a couple of lyrical variations.

This is the album’s pivotal track, the scene setter that embraces several shifts and changes, but that huge riffage has a menacing undertone,  its repeated motif reminding me of another killer track, possibly by Yes or Rush, whose name escapes me currently.

The political narrative which ensues now embraces the situation in the Opposition benches and that oh so familiar riff returns before an acoustic sequence leads into Up In Smoke.

This is a play on the nickname for London which is known as “The Smoke”  – akin to New York being “The Big Apple”.  “It’s all got very unEnglish up in the Smoke, oops it seems the politics is broke,” sings Nicholson as that guitar motif returns in a slightly different guise when Abraham comes in heavier than ever. Nicholson then matches the instrumental section by singing the next lines staccato, giving an entirely different emphasis to his vocal delivery.  The guitar motif returns slightly transposed and new keyboard effects come in before the short and sweet A Sense of Revolution.”

It’s back to the Genesis imagery in Dust when Nicholson observes “As the dust settles, it seems the fly avoided the windshield.” Baker introduces an almost religious element through a church-like organ combined with synths, and the re-introduction of Up In Smoke’s acoustic guitar before the pounding riffage continues unabated.

The beauty of this piece is that every section links to at least one of the others, either lyrically or musically, which gives it wonderful structure and balance, rather than going off at different tangents. 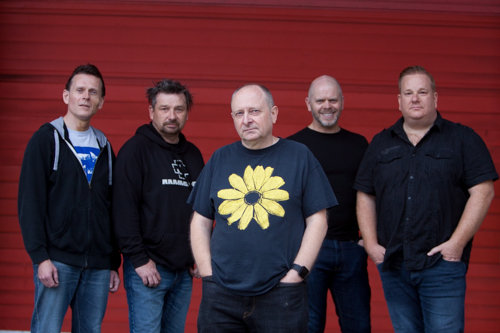 Tis But A Dream offers a breather through more muted instrumentation as, lyrically, Nicholson takes a step back to observe the overall situation through:  “Changing the rules as we go, moving the goalposts”, followed later by “Polarisation of the masses, across the classes, It seemed party politics just for a moment was irrelevant, inconsequential”.

As Time Fades links back to “We’ll still be citizens of our faded hope and glory,” entering a new age of uncertainty.  There’s a lovely resonant guitar solo from Abraham against a wash of keyboards from Baker and a pulsating beat from Luckman. The guitar solo evolves and unfolds to show off his amazing fluency and speed.

Mare’s Nest (definition – deliberate hoax) is musically slightly laid back to allow Nicholson  to launch into variations on a killer refrain “Danger danger all around is danger“, Nicholson finding several vocal nuances. both serious and semi-comical to deliver the diatribe.  The melodic instrumental passages that follow pack a mighty punch.

Baker’s sonorous piano and Abraham’s ringing guitar signal the final chapters in this journey into the dark heart of politics.

The Great Unknown returns for the denouement – a wonderful way of re-emphasising the central theme before the classical elements and angelic voices  of Storms Are A Coming (Reprise) return at the very end.

The album is supplemented with extended versions of both Dust and Smoke but for my part, the one central composition totally passes muster here. The production is absolutely spot on with the instrumental passages including Sarah Bolter’s contributions on flute, clarinet and tenor sax beautifully blending into the overall sound.

As previously mentioned, the album’s artwork created by Paul Tippett, features some familiar landmarks such as the Houses of Parliament, the White Cliffs of Dover – and HMS Victory (Nelson’s famous flagship at the Battle of Trafalgar) now kept in dry dock at Portsmouth, but pictured all at sea in the accompanying booklet.

They will be performing at five festivals in England, Wales, Poland and the Netherlands this year, but start with a special show at Talking Heads in Southampton on Sunday March 11 when the support act will be Peter Jones (Tiger Moth Tales) performing an acoustic set.

Enjoy a preview of this brilliant album  here.

And buy it from here.

4 thoughts on “Galahad – an epic for our changing times”