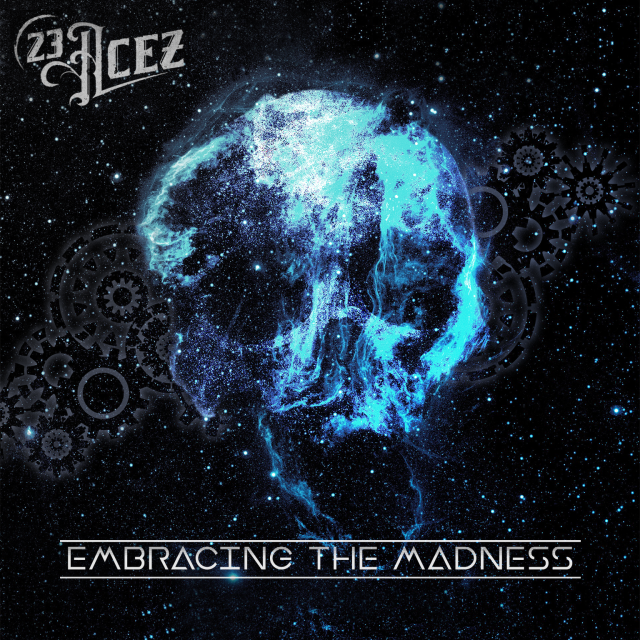 Prog/Heavy metallers from Belgium, 23 Acez, have been around since 2010, and they have recently returned with their third album “Embracing the Madness.” Why the hell didn’t I know about them earlier? Now, thanks to the PR wire, I got a promo copy of the mentioned release, which is a real t(h)reat.

The style that 23 Acez plays is pretty standard, comparing somewhat with more traditionalist ‘80s metal throwbacks, yet they manage to sound different and fresh when compared with a lot of the other bands that attempt to play in this particular style.

Benny Willaert’s vocals are gravely and rough, standing at the very center of the counter-tenor wails of Rob Halford and the husky baritone of Blaze Bailey. During the choruses of such catchy anthems as “Cellbound” and “Embracing the Madness” the vocal work almost punches past the rest of the arrangement. While he doesn’t soar into the higher stratosphere in the manner that most in the genre do, he more than compensates with sheer power.

Although the voice alone gives this album a heavy yet melodic edge, the entire arrangement pounds the sonic threshold of the listener into submission. Whether its faster songs like or down tempo stomping machines, there is a consistent picture of a mighty fist slamming itself down on a stone table and commanding your undivided attention.

“Embracing the Madness” is a powerful statement from a band that is hungry to show what their abilities are, and according to this they have much more to offer. Grab this record, you’ll not regret.