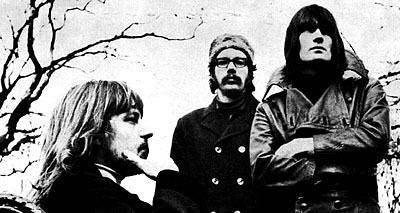 Given his breadth of tastes, it’s reasonable to think that Jimi Hendrix‘s invitation to the Soft Machine to support him on his tour of the States in 1968 was a calculated act of subversion, upending the guitar god cult and the power trio temple he’d built along with Cream.  The group was an underground darling, the French loved them, and although a rock trio — guitarist Daevid Allen’s departure in 1967 didn’t seem to faze them — they operated on a different kind of wattage, preferring the lower registers of distorto bass (Kevin Ayers, then Hugh Hopper) and organ (Mike Ratledge), beasts that closed in around Robert Wyatt’s peerless drumming.  What lyrics they used tended towards the surreal, either in delivery or meaning, as opposed to the era’s psychedelicisms, and along with their monster chops betrayed the members’ schooling.  They would come to be regarded as the core of the Canterbury Scene, even as they rejected the notion of any such thing, and while key to the development of progressive rock in Britain, their first records, with Wyatt, are diverse affairs defying categorization (hence, doubtless, their influence).  As the band drifted away from jazz experimentation in a rock setting and increasingly towards a watered jazz fusion — its more powerful form they certainly helped to invent — their power diminished.

But for a while, dada was there, and “Dada Was Here,” from 1969’s Volume 2, is an exact explanation of prime Soft Machine, working freely and with a wry, concealed grin.  Sung in Spanish, it is a series of queries with the inevitable answer of i-don’t-know, backed with a breezy post-bop (fuzz) bass, piano, and typical outta-this-world drumming.  There’s a hint of autumn to it, of turning leaves and melting clocks, and in that parallel world where things are as they could be and we appreciate grasp equaling reach, it’s a hit record.