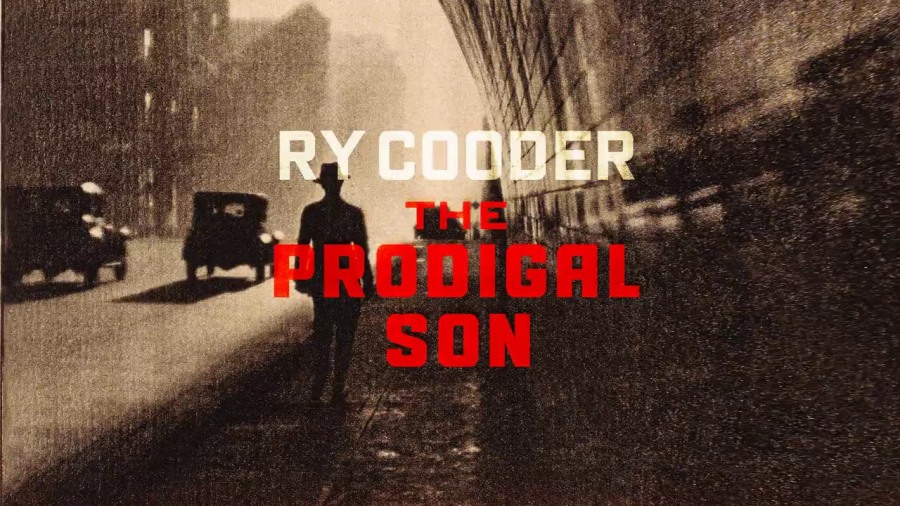 Even allowing for occasional brushes with fame — playing with Captain Beefheart and the Rolling Stones in the 1960s, making the very first digitally recorded pop album (1979’s Bop Till You Drop), producing the worldwide smash Buena Vista Social Club — Ry Cooder has steadfastly remained below the radar over five decades.  Occasionally though, he resurfaces with his trademark blend of Americana: plenty of space in the irresistible groove; tasty instrumental interplay; rich harmony vocals carrying an idiosyncratic, pungent lyrical message.

Cooder’s first album in six years, The Prodigal Son, is a welcome return to basics.  With the exotic decorations and oddball concepts of recent albums stripped away,  Cooder plays almost all the instruments (guitar, banjo, mandolin, bass and keyboard); his son Joachim co-produces and mans the drums.  The genre focus is narrowed too, zooming in on vernacular gospel by the likes of Blind Willie Johnson, Alfred Reed, Carter Stanley and William Dawson.  As Cooder told MOJO magazine,

“Gospel is the best music to sing.  When you sing it and play it, I always felt you go to some other place physically and emotionally … Maybe age has got something to do with that.  You live through certain experiences, you keep looking for something, and maybe you’ll find it.  I think I have.”

Indeed, Cooder sounds utterly at ease, singing without strain over the homespun textures and the breathtakingly lovely harmonies of the late Terry Evans, Arnold McCuller and Bobby King.  In the gospel songs he’s chosen, the narrators let go of worldly distractions (“Straight Street”), exhorting their fellow faithful to do the same (“You Must Unload”), rely on God (“In His Care,”) watch out for others (“Everybody Ought to Treat a Stranger Right”), and look for the life of the world to come (“Harbor of Love”).  The sense of serenity is palpable, inviting — startling, even.

Not that Cooder’s totally bailed on the hard-left POV of previous albums like My Name Is Buddy and Election Special.   Though purporting to be a common man’s perspective, original songs like “Shrinking Man” and “Gentrification” wear their dogmatic politics on their sleeves; and the Christ portrayed in “Jesus and Woody,” where the Savior asks “Mr. Guthrie” to pull out his guitar and take heaven’s collective mind off the mess on earth, isn’t necessarily the Biblical one.   But even the crankier sentiments go down easy, softened and relativized by the loving attention to musical detail and gift for understatement.  A spoonful of sugar and all that (or maybe it’s whiskey) …

In the final analysis, Ry Cooder is an underrated national treasure, both a product and source of the best American roots music, and The Prodigal Son is a beautiful album to be welcomed with open arms.  Listen for yourself: