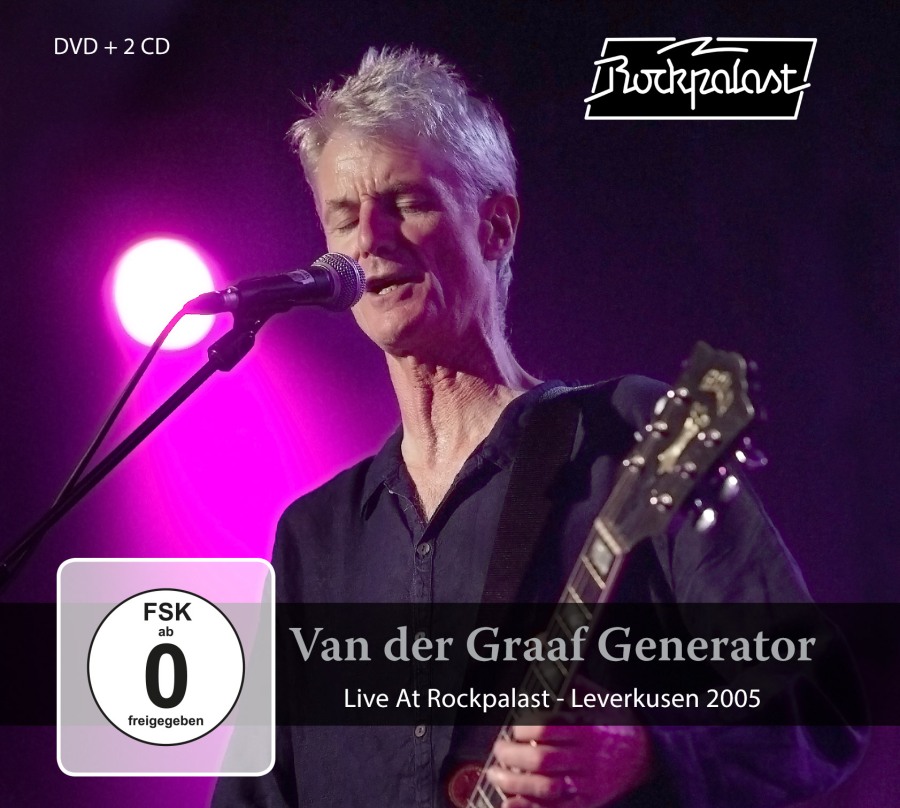 Following in the wake of King Crimson, ELP, Yes and early Genesis, Van der Graaf Generator were pioneers of progressive rock that never cracked mass appeal, even in their native Britain.   Not that they necessarily tried; VdGG’s music (created from 1969 to 1972, 1975 to 1978 and 2005 to the present) was acerbic, obsessive and challenging from the word go.  Reveling in collision and contradiction, at once sharp-edged and tender-hearted, out of control and in sync, the music Peter Hamill, David Jackson, Hugh Banton and Guy Evans made on their 2005 reunion album Present and the resulting tour was the equal of what had come before — urgent, authentic, a triumph of their unique approach and chemistry, done for all the right reasons.

Now Germany’s MiG Music has released the climax of that tour — Van der Graaf’s concert from the Leverkusen Jazz Festival, recorded for German TV’s Rockpalast, the only full length live video by the classic line up.  This bargain CD/DVD set is strong stuff, with rough edges proudly on display; not for the faint of heart, yet ultimately life-affirming and absolutely essential.

The performance leaves no doubt that Van der Graaf’s classic quartet was a band of well-matched equals.  Throughout, Peter Hammill barks out his bleakly beautiful, existential lyrics with operatic panache, swooping from gravelly declamation to frail falsetto and back in an instant.  As evident from his parallel solo career, Hammill’s unmistakable sound and viewpoint (which influenced Marillion-era Fish and Discipline’s Matthew Parmenter, among others) would be riveting all by itself.   But David Jackson’s stridently tasty saxophone work (frequently playing two horns at the same time, whether in unison, harmony or dissonance), Hugh Banton’s jagged organ lines and textures (more horror movie score than cathedral calm) and Guy Evans’ supple, insistent drumming complement and extend both the bleakness and the beauty of that vision.  Sometimes brutal in their aggressive, proto-punk bashing, sometimes coalescing from their separate corners into a distressingly fragile sonic tapestry, watching VdGG make music together is as absorbing as just listening here.

And what material they have to work with!   Following an opening medley from the Godbluff album, Van der Graaf launch into the then-new “Every Bloody Emperor.”  A lament for justice trampled by propaganda and politics, it emerges from silence, gathering into an angry protest and a desperate confession of faith, then shrinks back into enervated silence.  It’s as chillingly relevant today as it was back then, with Banton’s ironic fanfares and Jackson’s bumptious decorations setting off Hammill’s venomous, regretful vocals to perfection:

Unto nations nations speak in the language of the gutter;
Trading primetime insults the imperial impulse
Extends across the screen.
Truth’s been beaten to its knees; the lies embed ad infinitum
Till their repetition becomes a dictum
We’re traitors to disbelieve.
With what impotence we grieve for the democratic process
As our glorious leaders conspire to feed us
The last dregs of imperious disdain
In the new empire’s name.

But VdGG isn’t a political band; they’re not out to push a party line, or even a philosophy.  Hammill’s narratives demand the attention of the audience’s head and hearts, daring us to think and feel deeply, and that’s what the quartet carries off musically, again and again.  The apocalyptic scenarios of “Lemmings,” and “Sleepwalkers,” the awestruck, craggy prophecy of “Childlike Faith in Childhood’s End,” the drop-dead hilarious fan encounters portrayed in “Nutter Alert” — Van der Graaf bring them all to vivid, roaring life, then leave them with us, to make of them what we will.

“Man-Erg” from 1972’s Pawn Hearts may be the paradigmatic Van der Graaf Generator song, both for the musical territory it covers and for capturing Hammill’s prime concern in a nutshell.  Building from an austere ballad reflecting on our capacity for evil (“the killer lives inside me”) and good (“the angels live inside me”), the song explodes into a vicious sax/organ battle, wavers between last-ditch resistance and weary exhaustion — then collects itself for a final, serene peroration, defiant and unyielding even as the fight resumes:

And I too, live inside me
And very often don’t know who I am
I know I’m not a hero, but
I hope that I’m not damned:
I’m just a man,
And killers, angels all are me:
Dictators, saviours, refugees in war and peace
For as long as Man lives…

The moment captured at Leverkusen didn’t last.  Following the reunion tour, friction between David Jackson and the rest of Van der Graaf mounted; the end result was Hammill, Banton and Evans continuing VdGG as a trio, with 2016’s Do Not Disturb touted as the band’s potential swan song.   From their 1969 debut The Aerosol Grey Machine to that seeming finale, Van der Graaf Generator’s raw material has been what Charles Dickens called “The Battle of Life.” They’ve never denied the difficulties of existence, sugarcoated the realities involved, or even tried to provide answers to the questions that battle raises.  But their music is a clarion call to embrace what we’ve got, in all its messy glory, even when meaning can only be found in the struggle itself.  When you finish watching or listening to Live at Rockpalast, you may feel like you’ve been through the wringer.  But my bet is you’ll also feel it was worth it.