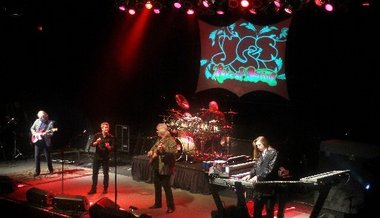 I wrote this review as a Facebook note in 2011 — my first online year of “too many concerts” (but not my last), when I heard Yellow Matter Custard, Yes, Bob Seger, Rush, Jeff Beck, Robin Trower, U2 and Paul McCartney live.  The following is unedited, except for a couple of cosmetic fixes (the occasional snark is still intact).  I think of it as an appropriate appetizer for my next Yes show, coming at the end of June! — Rick Krueger

Over the last few years, I’ve come to the conclusion that rockers should rock as long as they want to rock. Maybe it’s because I’m pushing 50, but I have fewer & fewer problems with icons from the ’60s, ’70s, ’80s, etc. touring endlessly. In fact, my favorite moment on the Crossroads 2010 DVD is a shot of Hubert Sumlin (guitarist for Chicago blues legend Howlin’ Wolf) sitting in a chair, an oxygen tube in his nostrils, jamming away & happy as a clam. Let it rock, I say.

The opening of Yes’ show at the Orbit Room, however, was a severe test of that credo. When Chris Squire trundles onstage and has to strap his bass guitar higher than ever before so his stomach isn’t in the way; when Alan White stiffly totters onto his drum riser; when the first two songs (“Parallels” & “Tempus Fugit”) feature wildly fluctuating tempos, slowing down not just from section to section, but from riff to riff — well, you have to wonder, however briefly, if some reunions should be left undone. Add a new lead singer who specializes in slo-mo interpretive movement, jazz hands a-plenty, and Riverdance spins during instrumental sections (on top of a salt-and-pepper crew cut), and the night seemed even less promising.

Fortunately, the music prevailed and the players whipped themselves into shape by the third number, “Yours Is No Disgrace.” Squire & White pounded out a revivified backbeat, Steve Howe unleashed his patented Chuck Berry-meets-country-meets-psychedelia guitar magic, and Oliver Wakeman not only proved a nimble & able replacement for his dad on keyboards, but also won the “longest hair in the band” award. As for Benoit David, that new lead singer — despite a few shaky high notes at the start, he quickly proved able to navigate Jon Anderson’s stratospheric vocal lines with confidence & joy, soaring on his own & locking into tight harmonies with Squire and Howe.

From then on, the night was pretty much an unalloyed treat. “Soon” (from the album Relayer) was a gorgeous ballad interlude, with lush lap steel playing by Howe and David nailing the stirring vocal. “Close to the Edge” had the last attack of shaky tempos for the night, but also sported solid ensemble playing, Squire shaking the room with his bass pedals, and Wakeman rocking out on all eight on his keyboards. “I’ve Seen All Good People” shone despite a dead mike on Howe’s lute (!) at the beginning, culminating in David-led handclaps & audience vocals. Howe’s solo spot (featuring an unaccompanied version of “To Be Over,” another Relayer track) was mind-meltingly good, both technical & tasty. The heavy “Machine Messiah,” an extended piece from the Drama album, served as a slam-bang intro to Yes’ heavy hitters. “Owner of A Lonely Heart,” “Long Distance Runaround” (with the least extended bass solo I’ve ever heard from Squire), “Starship Trooper” and the inevitable encore “Roundabout” got the all-ages crowd dancing, rushing the stage, singing at the top of their lungs, and motivating Howe to thank everyone for “being such a rowdy, crazy, great audience.”

Have the mighty fallen? To think of Yes (who did their last US arena tour 7 years ago) playing a 1500 seat club is more than a little sad. On the other hand, if they can overcome the obstacles of age, lineup changes, indifferent disc sales, and unpredictable sound systems to play shows with this much intensity and fire, I’d say it’s a good trade-off!