“Where have all the great showmen gone?” I opined in Prog magazine earlier this year. In other words, who are the artistes that are taking that step beyond playing to offer a performance that also offers theatre, circus – and even a touch of Vaudeville?

The artiste who inspired this question has just been on vacation in New York – and I cannot think of a better place for him to experience a whiff of the greasepaint lingering close by on Broadway.

Before he goes to the Crescendo Festival in France on 21st August then plays further dates in France and the Netherlands next month to wow more audiences, ladies and gentlemen, let’s give a huge cheer for Franck Carducci, the Superstar Mad Hatter, whose musical stock is slowly but surely rising as he continues to conquer Europe in his own inimitable but never understated way.

Frenchman Franck has spent his career drawing on a range of musical and literary influences that now shape his music and, more importantly, his show.  A prog muso friend summed it up perfectly when he remarked at a recent show at how well Franck and his trusty band of musical adventurers have managed to devise a big show from relatively small but nevertheless dramatic components.

And there’s the secret of their success. There is no huge Roger Waters “everything but the kitchen sink” theatricals involved. Instead, there are cleverly designed costumes and a couple of randomly unusual instruments involved in their concert set pieces. The rest is down to an innate talent that blends elements of psychedelia, classic rock, prog and even six-part harmonies into a finely tuned and utterly compelling two hours.

Having first encountered Franck a couple of years ago in Southampton, his cheery, warm, friendly demeanour and total belief in what he does were both refreshing and highly contagious.

His influences include classical literature and history (he is big on the Ancient Greeks), classic rock, (one of his ambitions is to support Alice Cooper) as well as the prog classics, especially Genesis. In fact, one of his most memorable moments was supporting Steve Hackett, who told him not to give up on his dream then guested on his second album Torn Apart in 2015.

More significant breakthroughs came  last year, firstly when he and the band were greeted to a standing ovation at the legendary Loreley prog festival in Germany. This was quickly followed up in the United Kingdom, when, after the Saturday night headliners at the British prog festival, Summers End,  elected to go on early evening, several of us “in the know” implored everyone to stay to watch Franck and company.

The magnificent performance they subsequently delivered nearly blew the roof off the modest Drill Hall in Chepstow and prompted my Prog piece.  Further endorsement of their burgeoning popularity came earlier this year when they were voted Classic Rock Society’s Overseas Act of the Year.

So what’s the alchemy here? Well, Franck is primarily the band’s bassist and singer, but his onstage persona is that of Master of Ceremonies – with a twist.  His opening number, Superstar, sets the tone as he arrives on stage in shades, cowboy hat and outrageously hairy waistcoat, having to use his personal “security” man to fend off the advances of an amorous lady admirer.

The admirer is one of the many roles assumed by the very talented and beautiful Mary Reynaud.  She is traditionally the band’s support act as well as being an integral part of the show, especially her seductive dancing seldom seen elsewhere in prog. Her solo work – just her and her trusty acoustic guitar – demonstrates her  song writing skills and unique voice which is sweet and powerful in equal measure.

Included in the line-up is Franck’s long time friend and collaborator, guitarist Christophe Obadia, who is one of prog’s more eccentric personalities, acting as a great foil for Steve Marsala, who is the quieter and more sensible of the band’s guitarists.

The show simply could not work if there was not a great affection and empathy between the members of the all-star cast. For example, a mutual love of classic rock riffs sees Obadia and Marsala trading licks on some of the legends such as Smoke on the Water and Sweet Child of Mine.

The music is pure rock, fantastically infused with psychedelia and some delicious curios, for example, the use of a theremin without which Good Vibrations would never have vibrated. Mary’s invocation of its extraordinary sounds involves provocatively using certain parts of her body while Obadia’s oscillations are more shock horror than X rated! 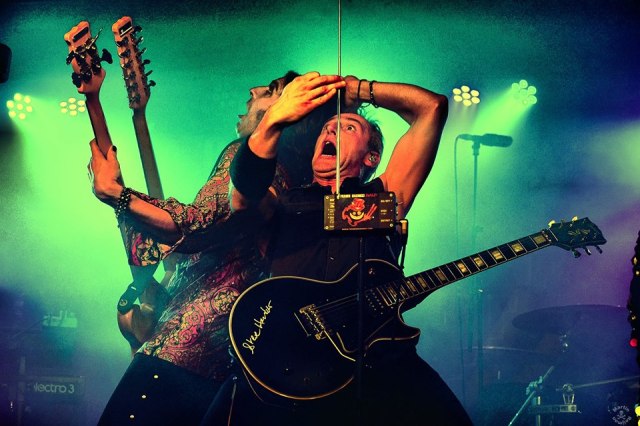 As well as her belly dancing solo on stage, Mary also has very differing starring roles in two of their most memorable songs. The recently introduced beautiful, bluesy ballad, The Angel, is a show stopper, Mary arriving on stage in her angel wings, lit by LED lights, which, when she spins, whirls into extraordinary patterns of colour.

Then there is Alice’s Eerie Dream, and where to start with this epic? As Franck in his Mad Hatter attire explains, this is the true story of Alice in Wonderland, when her adventures caused her to become a lady of the night.  It’s a long and compelling tale, Mary becoming Alice in her fabulous corseted dress and mask,  trying to seduce the band members in turn. But it is left to Obadia to finally fend her off, using the throaty strains of an enormous didgeridoo. Yes, you did read that correctly!

As well as classic rock, the band can also stun with their vocal dexterity in the brilliant six-part harmony of On The Road To Nowhere with just Franck strumming acoustic guitar as occasional accompaniment.

Well, that’s being perfectly Franck. He’s an entertainer, a showman, a musician, an actor and above all, a real star.