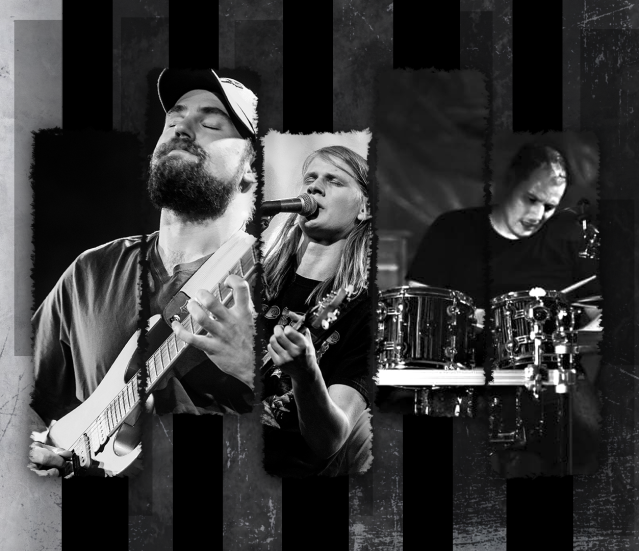 Read an interview with Anthony and Guðjón below.

Hello! Thanks for responding to this interview. How have you guys been lately?

G: We’ve been great thank you! Excited for the release, and hard at work preparing for it.

How might you introduce yourselves to new potential listeners?

A: UMÆ is an experience; emotional; meaningful; energetic; somber; melancholic. We are all over the board, but I swear it is cohesive. [laughs]

What inspired the name of the band — UMÆ?

A: Guðjón and I were spitballing a lot of ideas during the demoing phase, some more jokingly than others, but we settled on this one, which uses Icelandic characters, but doesn’t mean anything in Icelandic. I like the idea of a word that isn’t already defined. It gives us the opportunity to define it by the music and artwork we create and associate with it.

How did UMÆ initially form as a creative unit?

A: Well, I went on a trip to a prog festival, where I ended up meeting and playing music with Guðjón, Samy, and many other people. We all had similar interests in music, and we all enjoyed sharing the stage together.

After I returned home from the trip, I was inspired by the jamming, so I decided to contact Guðjón about possibly collaborating on some music. I sent some rough demos, he shared some examples of his own, we shared bands with each other. From there, we laid out plans for me to travel across the ocean to Iceland and start writing. Very soon we sent demos over to Samy and convinced him to commit to the project.

You are about to release a debut album titled “Lost in the View.” Where did the inspiration for it come from and how did you go about the whole process of writing and recording it?

G: In essence it just comes down to our love of music, and willingness to create. It’s hard to pinpoint a specific inspiration for the exact music featured on the album. Some of it was written well before we started working on it together, as far back as 10 years, which was the case for the already-released single “Turn Back Time”. The lyrical concept came as a sort of reaction to the music, and we soon found ourselves writing around that concept.

Over the 6 initial weeks that Anth spent in Iceland, we recorded and arranged demos for the whole album. We started in my living room; plugged in a guitar and played whatever was on our minds. In about three weeks we already had the basis to all the songs. The remaining three weeks were spent arranging the song structures, filling in blanks and sculpting the general vision for the sound of the record. Some of these early demo recordings even made it into the final product. We focused on retaining the initial feeling we got from each and every part, and enhancing it further with the arrangements, and later on lyrics.

The recording process took place literally over the world. We recorded drums with Samy in Toronto over an intense 3 day session. Over the course of a year, we’ve built the layers on top of these bed tracks, with recording taking place in 4 locations in Iceland, 5 different home studios in the US, and more recently, in Sweden. We’ve been tweaking and adding stuff along the way down to these very last days.

UMÆ is a trio in its core but the upcoming full-length release features quite a number of guest musicians, including John Wesley (Porcupine Tree), Conner Green (Haken), Adam Holzman (Steven Wilson) and Eric Gillette (Neal Morse Band). How did the collaboration with each of them come about? How much did they actually contribute in the writing phase?

G: Once the music started coming together, we soon started looking at people that we thought would be a good fit for various parts of the album. We had a good feeling about the music, and decided to aim high from the get-go.

Fairly early in the process we reached out to Conner, who was up for the task, and eventually played on most of the album. At that time all the foundations to the songs were already laid out on guitar and drums, along with some of the main melodies. We left it up to him to interpret the bass parts, and were really happy with the end results.

On the keyboard front, most of the album features Magnús Jóhann, a brilliant young player from Iceland who we worked closely with. On two of the heavier songs however, we wanted to try a little different “flavor”, and figured Adam Holzman might be good fit. So we contacted him; thankfully he was up for it and was able to find a time within his touring schedule to record it. Similarly there the songs were already laid out, and we presented our rough idea of the sounds we were going for. His take on it ended up being just right.

We wrote and recorded all the vocals initially, but didn’t feel our voices were the right fit for certain songs. Samy had encountered John Wesley around the time we were exploring options for these songs, and presented the idea of his involvement. He was up for giving it a shot, and when we heard his take on “Turn Back Time” we were immediately sold.

On one of the tracks we entertained the idea of having a guest solo spot. Eric Gillette responded quickly to our inquiry, and before we knew it we had a killer solo in our hands! He’s such an amazing player, and we’re really stoked to have him appear on the track.

What can be expected from the upcoming album? Would you say the released single for “Turn Back Time” is an accurate sample?

G: Yes and no. The track contains some of the main themes from the album, and lyrically is somewhat representative of the concept, but definitely does not cover the wide range of influences we tap into throughout the album. It’s a good start of the journey that gets a nod here and there, but the atmosphere shifts to a bleaker tone as the album progresses.

A: Guðjón kind of touched on that already, but I’ll elaborate a bit. When I compose a piece from beginning to end, like our aforementioned single, I typically work from a melody and or chord idea, and sometimes just a rhythmic idea. I like to use programming software to document the guitar I’ve come up with, then build the other instruments around it. It’s all midi programmed, but it gives me a good sense of what the song could sound like.

When Guðjón and I were co-writing songs, there were many times where he had a riff or two, I had a riff or two, we placed them in order, and basically connected the dots by filling in the middle. Sometimes we had no idea how we were going to make two parts connect, but we managed to pull them together. So that’s a bit of a deeper glimpse into the process.

What are your ultimate hopes for UMÆ as a band?

G: Hopefully we’ll eventually manage to make a living out of making and performing music. Anything beyond that is a bonus really.

Do you have any bigger plans for the future?

G: Bigger? For sure, although we can’t really say much at this point, other than that these plans are currently in formation.

The last words are yours.

A: To keep up with UMÆ, our single releases, album release, touring plans, and all other major news, go to https://www.umaeband.com/

Thanks for having us on this interview!