As I entered Reggie’s Rock Club on the final day of Progtoberfest, the Virginia band Kinetic Element were winding up their set … their take on classic prog, spearheaded by keyboardist Mike Visaggio, sounded accomplished and intriguing; I wished I could have arrived earlier and heard more. Plus, you gotta love a band with a lead singer in a kilt!

I’m still working on arriving earlier; fortunately, Kinetic Element has stepped up with more to hear.  Forged in the crucible of key personnel changes, KE’s new The Face of Life is a sturdy album of ambitious, appealing prog from the grassroots.  Visaggio, longtime drummer Michael Murray, bassist Mark Tupko, vocalist Saint John Coleman (he of the kilt), and new guitarist Peter Matuchniak rise to a tricky challenge — shaping music that’s steeped in the “founding proggers” while striving for fresh sonic territory and aptly framing the cultural and spiritual musings of Visaggio’s lyrics.

Album opener “Epistle” lays out Kinetic Element’s approach; seven minutes of space-age blues melded with a modernized take on 1 Corinthians 13, it’s a driving showcase for Tupko and Murray’s grounded groove, Visaggio and Matuchniak’s timbral variations and upbeat solo flights, and Coleman’s forthright delivery.   The epic “All Open Eyes” admittedly kicks off in familiar Yes Album territory, as a cappella vocals trade off with wistful guitar/mellotron licks.  But KE quickly heads their own way, building from a ear-catching symphonic overture through dramatic piano-led balladry (which Coleman aces) into an exciting instrumental with hot licks aplenty from Matuchniak, Tupko and Visaggio, as tempos, textures and the players’ roles constantly shift.  The return to the ballad for the big finish is a classic prog move (just ask Neal Morse), but Coleman’s portrayal of the resurrection of the body and the life everlasting is utterly committed, and Tupko’s “Heart of the Sunrise” tribute toward the end tastes like a delicious cherry on top, not like half-baked leftovers.

Similarly, the title track’s opening can’t help but recall Going for the One’s “Awaken” to my ears.  But again, there’s a swift upshift to a more aggressive vibe, as Matuchniak and Visaggio push hard atop Tupko and Murray’s steamrolling riffs, Coleman testifies over gospel-inflected piano, and the band cycles through an organic, consistently surprising rotation of related ideas.   “Last Words” is an affecting coda to the album, a two-verse meditation sung first to Visaggio’s digital string quartet, then to a full band backing that floats to a serene conclusion.  Throughout, the mix by Glass Hammer’s Fred Schendel and Steve Babb is full, present and warm.

So if you want meat and potatoes prog that’s more than a hackneyed rehash of the past, Kinetic Element’s proudly blue collar efforts fill the bill.  The Face of Life is a satisfying listen and a genuine achievement, splendidly realizing the latent potential of a fine band.

For more on Kinetic Element and the new album, check out this article at (of all places) Broadway World.  The Face of Life is released on February 28, when physical and digital versions will be available from Bandcamp, Melodic Revolution Records, CD Baby, and Syn-Phonic Music.  Or, to pre-order the new album (along with previous albums and t-shirts) direct from the band, message Mike Visaggio on Facebook.  I did! 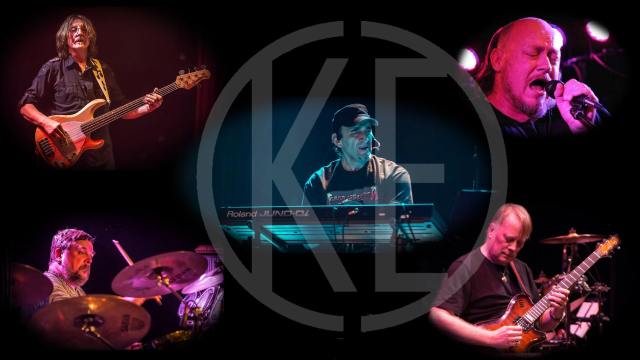 One thought on “Kinetic Element, The Face of Life”