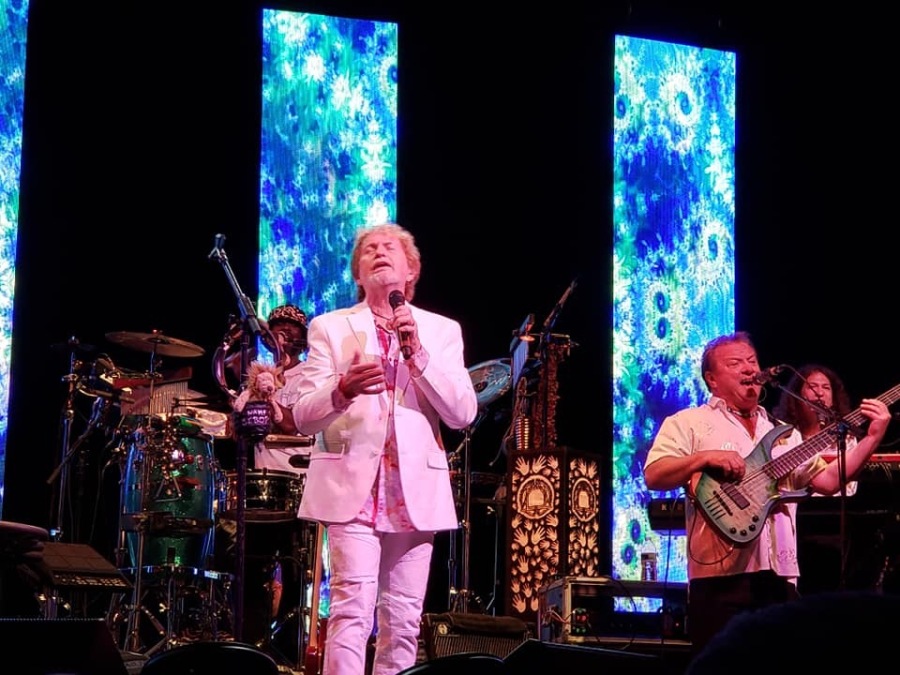 The crowd was surprisingly sparse — was every other music fan in town at Sarah MacLachan’s orchestral show?   Regardless, Jon Anderson lit up 20 Monroe Live Thursday night.  Backed by a blazing new band from around the world — four young guns plus four experienced veterans  — Anderson shone brightly throughout an evening of the expected Yes classics, solo career tasters and highlights from his new 1000 Hands, radiating joy and nailing every high note. A former governor of Michigan used to blab on and on about “relentless positive action”; this was two hours of the real thing.

After all, it takes serious confidence to kick off a show with your single biggest hit, “Owner of a Lonely Heart”.   It takes even more guts to go beyond recreating past glories — as Steve Howe’s version of Yes did so effectively in the same venue a year ago — launch your best-known music off in head-snapping new directions, and keep a crowd of die-hard fans on your side throughout.  But that’s exactly what Anderson and his merry band pulled off.

It also says something about the complexity and challenge of  Yes’ music that the keyboard parts were covered by two workhorse players, Joe Cosas and Zach Tenerio-Miller (the latter subbing for 1000 Hands producer Michael Franklin) plus violinist Jocelyn Hsu and flutist/saxophonist Billy Meether.  Not to mention Meether’s baritone sax and Cosas’ trombone occasionally doubling Chris Squire’s bass lines, played with aplomb by an always-grinning Tim Franklin.  With all that going on, guitarist Tommy Calton’s task was simple in comparison: hit all the key Peter Banks/Howe/Trevor Rabin riffs and carve out solid solos where needed (occasionally supported by acoustic strumming from Anderson, Cosas on guitar, mandolin and harp, and Hsu on ukelele).

Beneath this riot of tonal color and virtuosity, the heart of the excitement beat without pause: Rayford Griffin (drummer for Anderson’s previous collaboration with jazz-rock violinist Jean-Luc Ponty) and percussionist Steady Joseph kept the ensemble on its toes, constantly morphing from beefy four-on-the-floor backbeats through prog-rock precision to deft world music grooves.  The results bordered on magical: “Yours Is No Disgrace”, “I’ve Seen All Good People” and Simon and Garfunkel’s “America” bubbled with explosive intensity; “Sweet Dreams”, “Long Distance Runaround” and “Wonderous Stories” (the last a new addition to the set) cruised serenely, keeping plenty of power in reserve. 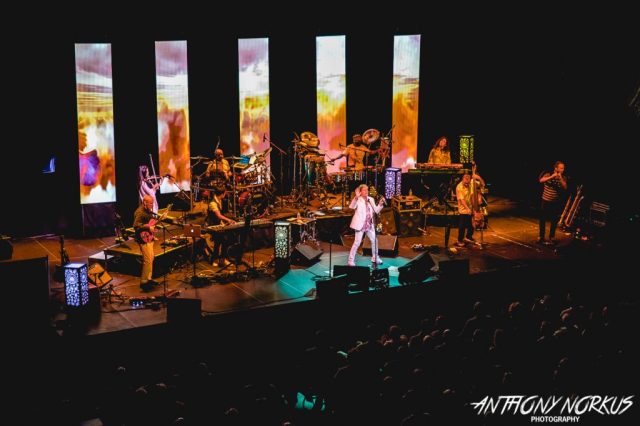 With the details under control, Anderson genially presided over the show, playing his benevolent hippie wizard role to the hilt.  Having such solid backing gave him freedom to include chunks of his sci-fi fairy tale Olias of Sunhillow,  pull out his Vangelis collaboration “State of Independence” — even head offstage while the band raised the roof with the James Brown/Jaco Pastorius jazz-funk standard “The Chicken”, just like a old-school soul revue!  The freshness and range of the material from 1000 Hands provided another pleasant surprise.  Anderson’s solo writing is consistently more straightforward than Yes’ multi-part epics, but whether on the choral counterpoint of “Ramalama” and the title track — with up to seven players also chiming in on pinpoint harmonies —  the smooth reggae of “Makes Me Happy” or the EDM propulsion of “WDMCF”, the new songs impressed consistently, holding the audience better than unfamiliar music typically does.

Delightful as all this was, Anderson saved the best for last, bringing the crowd to its feet: a charged-up “Starship Trooper”, incorporating a chunk of Olias’ “Solid Space”; a lickety-split “Roundabout”, pleasingly upended by a devastating Afro-Cuban breakdown at the bridge; and a graceful rendition of Relayer’s “Soon” that gently wound the night to its close.  It can be easy to mock Anderson’s ever-present, sometimes woolly peace-and-love speechifying, but it says something for him that these first-class musicians  — hailing from Florida, Los Angeles, Ireland, Sweden, Taiwan, and the Philippines — could come together and so thoroughly embody both his musical legacy and his lyrical vision of human brotherhood.

This was easily the best Yes-related show I’ve ever seen, going back 35 years; on the cusp of turning 75, Jon Anderson has declared his independence and blazed a fresh trail forward with this tour.  See it if you get a chance!

— Rick Krueger (with thanks to Anne Sly and Anthony Norkus for photos, along with Michael Kivinen and Ross Boisseneau of Local Spins for their insights.)

One thought on “In Concert: Jon Anderson’s State of Independence”