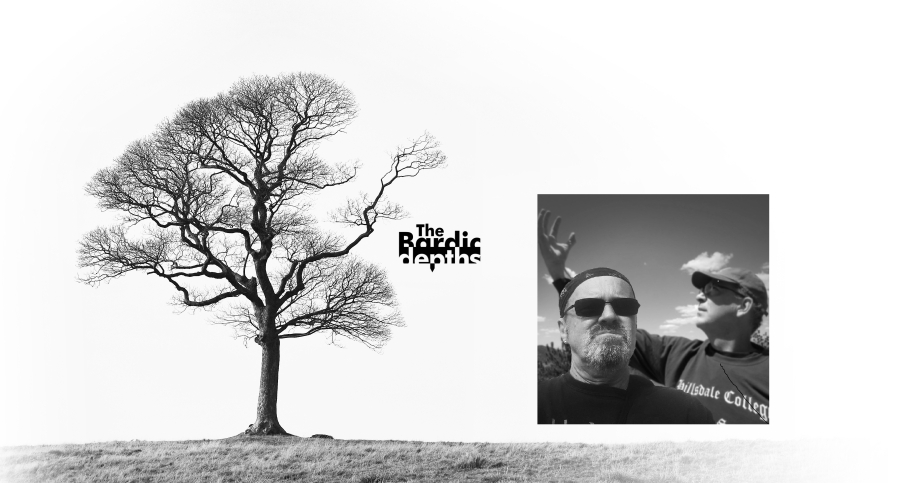 Friendship arises out of mere Companionship when two or more of the companions discover that they have in common some insight or interest or even taste which the others do not share and which, till that moment, each believed to be his own unique treasure (or burden). The typical expression of opening Friendship would be something like, ‘What? You too? I thought I was the only one.’ … It is when two such persons discover one another, when, whether with immense difficulties and semi-articulate fumblings or with what would seem to us amazing and elliptical speed, they share their vision – it is then that Friendship is born.

The Bardic Depths is a rare creation; the method of its making embodies what it portrays.  It’s a distinctive take on the concept album, sparked from ongoing collaboration by two devoted lovers of progressive rock, with stellar contributions from some of the music’s current leading lights.   (Oh, and fleeting spoken-word cameos from others, including yours truly — so yeah, objectivity is out the window here.)

Lyricist Brad Birzer and vocalist/multi-instrumentalist Dave Bandana have been self-releasing enjoyable albums for a few years now,  launching impressionist volleys of lyrical prose (usually in a dystopian sci-fi framework) via arching, chantlike melodies, poised atop appealingly thick ambient pads and amiably chugging pop grooves.  When Birzer pitched the life, times and friendship of C.S. Lewis and J.R.R. Tolkien as an album concept, Bandana loved it — but as the music took shape, he realized that contributors who could kick things up a level were needed for the album to take wing.

Enter the Passengers — that astonishingly amiable Facebook group of fans brought together by their love of Big Big Train.  Having seen BBT live (and made numerous musical friends in the process), Bandana modestly reached out for help.  And, as the video below reveals, one thing led to another:

And so The Bardic Depths traces Lewis & Tolkien’s wondrous story: from their common experience in the horrors of World War I to the love of ancient lore and learning that bound them together; holding fast to permanent things through the trying times of the 1930s and World War II; striking a chord in hearts worldwide with their visions of Narnia and Middle Earth — then, somehow, drifting apart in the wake of their triumphs.  Birzer provides evocative chains of word association (as well as quotes from Lewis’ works) that link the nascent Inklings’ lives to the trials of Homer and Hengist, while Bandana builds sturdy sonic edifices of ominous drones, mid-tempo funk and even a splash of niftily driving disco.  The antecedents in prog history (Pink Floyd and Talk Talk) are obvious, but filtered through the pair’s Stoic-yet-grateful sensibility; the resulting material is an allusive gem of narrative and concept, uniquely faceted and remarkably compelling.

And then Birzer & Bandana’s collaborators polish the gem until it shines!   Kevin McCormick’s stinging lead guitar and Tim Gehrt’s rock-solid drumming pull the listener headlong into “The Trenches”; John William Francis’ marimba adds a biting glaze to the spoken Icelandic and frosty atmosphere of “Biting Coals”.  Peter Jones’ dashing sax solos and Paolo Limoli’s delectable keyboard work propel the middle triptych (“Depths of Time”, “Depths of Imagination”, and “Depths of Soul”) to impressive heights of expression and power.  Then comes “The End” — a four-way collaboration with Bandana, Limoli, Robin Armstrong  (of Cosmograf) on guitar and Mike Warren on cello that flowers from heartbreaking, sparse simplicity to widescreen lament.  Yet after catharsis, there’s celebration of what Lewis and Tolkien left behind: the 7/4 psychedelia of “Legacies”, with Bandana and Jones’ vocals carving out classic Lennon & McCartney territory, topped by striking guitar solos from Gareth Cole (Fractal Mirror) and Armstrong.  Kudos also go to Armstrong as producer; his clean, spacious mixing and mastering opens up and clarifies the dense sonic collages, inviting hearers further up and further in.

As all of the above makes evident, I’ve quickly grown to love The Bardic Depths; aside from my personal connection to its creators, it’s an immersive work that reveals more beauty and delight with every listen.  Its words cut to the heart of what matters most; its music channels and evokes the cutting edge of progressive pop and rock, past and present.   Don’t hesitate to check out this very, very fine album.

The Bardic Depths is released March 20; you can preorder CDs & T-shirts at Gravity Dream Music and/or digital downloads at Bandcamp.

3 thoughts on “Sounding the Bardic Depths”