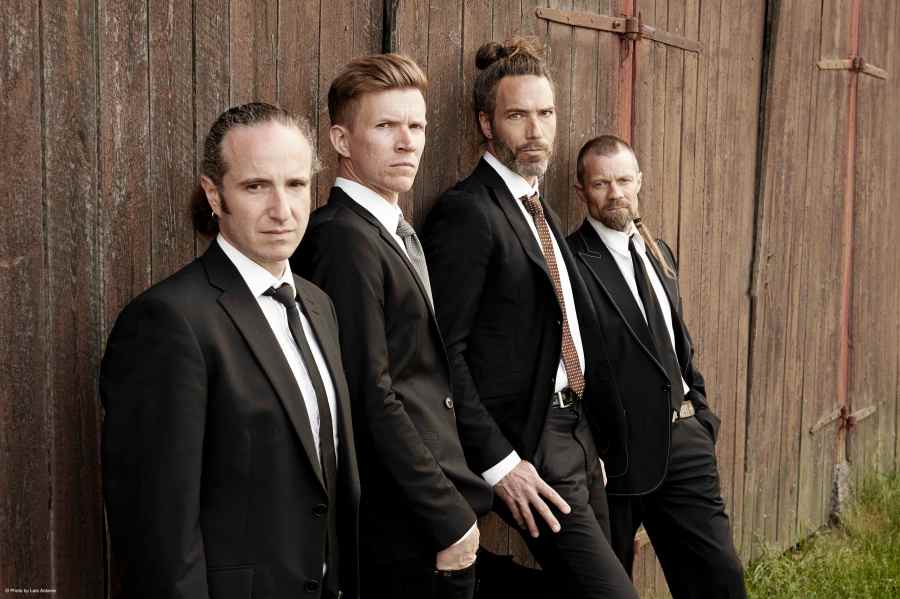 Apparently I’m about two and a half decades late to the Pain of Salvation game. Better late than never, I suppose. I know I’ve listened to some of their more recent work when it came out, but at the time it didn’t grab me. Panther grabbed me, and now listening to a bit of their back catalog I’m starting to get it. Pain of Salvation have their own unique corner of the progressive metal market. No one else sounds quite like they do, at least on this new album. Pain of Salvation is just more proof that Scandinavia has the best bands.

Panther deals with tensions between those who fit into society and those who don’t. As someone who probably fits with the latter (and I imagine many progressive rock fans and musicians also would), the overarching concept certainly appeals. There are also dystopic overtones throughout, especially on “Unfuture.”

Welcome to the new world… a better and improved world for our mankind. – “Unfuture”

On the concept, Daniel Gildenlöw comments, “Because we live in a time where we’re more aware of people not fitting the norm and we’re doing everything we can as a society to acknowledge all of these individuals, but at the same time, they’re more disowned than ever, more medicated than ever. The album is painting pictures of a world, I guess. If this was a movie it would be scenes from a city. It’s set in one city, and it’s populated by dogs and the panthers, the so-called normal people and the spectrum people. That’s the setting for the entire album.”

Conceptually this is an album that will stand the test of time. It deals with timeless issues, in a similar way to Steven Wilson’s lyrics from both his Porcupine Tree and solo careers.

Panther has a unique type of heaviness for the prog metal genre. It comes from the low bass and the drums, as well as from moody synthesizers. Not being all that familiar with the band’s back catalog, I can’t say whether this is typical for them, but I can say that I like it on this record. The opening track, “Accelerator,” sets the tone with a pounding drum beat and disjointed time signatures. It sets the listener off, and yet musically it is so well written that it all comes together. There is a great deal of musical variety here as well. Although clearly a metal album, there is abundant use of acoustic instrumentation. The brief instrumental track, “Fur,” uses some sort of stringed instruments that I can’t even identify.

I hear a bit of a Deep Purple influence on both the music and on Gildenlöw’s singing. There’s a moment on “Restless Boy” where you’d swear that Ian Gillan was screaming. Obviously Pain of Salvation are entirely their own sound, but coming into the band relatively fresh I wasn’t expecting that influence.

“Wait” has an almost ethereal tone to it. There’s a slight distortion on the vocals that combined with the acoustic guitar lines makes the track hauntingly beautiful. Gildenlöw’s vocals are stellar throughout the album, but they shine on this track. The song builds gradually as it moves along. A brief instrumental interlude is brought back to a vocal crescendo that truly soars.

Nowhere is the band more unique than on the title track, “Panther.” The band shows they aren’t going to limit themselves to any sort of pre-set sound. An electronic overtone mixed with what could almost be described as rap (although it is more closely akin to what Korn does) is tempered by passages of piano with clean vocals. The lyric, “‘How does it feel to be you,’ she once asked me. I said ‘I feel like a panther trapped in a dog’s world,'” beautifully sums up the album. The me vs. them, them vs. me dichotomy we live in. The two musical styles in the song place the main tension of the album right in your face. What an absolutely brilliant way of tying lyrics and music together.

I stopped watching the news a long time ago. No disaster felt new. The same old mankind that I know.

I’d have to say the album is a bit cynical overall, which is fine by me since people often describe me as being overly cynical. “Species” finds the band totally sick of it all. At this point in 2020 I think we’re all sick of it all. The chorus shouts, “Sometimes I hate my f****** species…” The next verse proclaims, “My generation was told to pursue my dreams, but it is not what it seems, you’ll never need what you want and you rarely want what you need. My generation was told that we could be anything, but that’s a hope that deceives.” This is an exceptionally brilliant analysis of modern society. The music, the lyrics, and the vocal delivery convey the sense of shared rage many of us have at the hand we’ve been dealt. Lyrically it reminds me a bit of the Rolling Stones: “You can’t always get what you want, but if you try sometime you just might find you get what you need.”

The final track, at over 13 minutes in length, brings the album to an epic conclusion. The eerie guitars, the pounding drums, the spooky synths, and that driving low bass come together in a powerful way. “Icon” is an appropriate name for what should be a new icon in progressive medal. The shift to clean vocals and clean guitar happens in an instant a few minutes in, but the smoothness compliments the lyrics. Lyrically it looks back on the confusion of childhood, and as the protagonist turns into an adult things get clearer. But the fuzzy distortion comes back in bits as he realizes that things never do become as clear as you wanted them to be when you were a kid. What the band is doing here is really something special. The guitar solo eight minutes in is a true high point for the album.

As a child I felt too old and now when I’m grown up I feel too young. A different kind so I’ve been told just slightly out of reach and out of time. I count the years to understand the faces of the friends I used to know. I close my eyes and they’re still the same. How to mourn the living that are still around yet somehow gone.

Panther takes you on an emotional and musical journey. Life is hard. 2020 has proven that to all of us. How many times have we thrown up our hands and said “ok, year, you win. I give up.” And then a tornado or an earthquake hits. Or we realize just how divided we are on a personal level. I don’t understand you, and you don’t understand me. And neither of us understand that person over there. Pain of Salvation get at fundamentally human issues, and in doing so they have created a beautiful album.

What more can we do?

Please forgive any transcription errors in the quoted lyrics. I didn’t have a copy of the lyrics to go off of – just my ears.