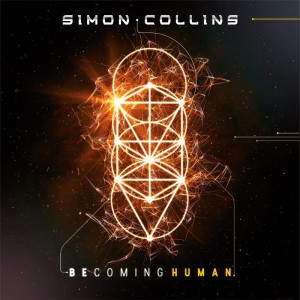 No stranger to the music industry due to his music legend father Phil Collins, Simon Collins takes centre stage in empowering album ‘Becoming Human’. There’s no doubt that songwriting flows through his veins, and the latest release from Simon Collins completely confirms this.

Known for performing in band Sound of Contact, Simon’s solo project was produced by keyboardist and sound designer Robbie Bronniman, and features one of the key players from SoC. Released via Frontiers Records, this refreshing album pays odes to the greats while layering it’s authencity on the table. Crossing through realms of pop, industrial and rock, there’s no need to completely label the sound of this album.

Having gained support from Prog Magazine and sites across the globe, ‘Becoming Human’ features 12 tracks of progressive music with subtle fragrances of futuristic electronica in it’s mix. Exploring lyrical themes such as personal loss, addiction and the nature of our place in the universe, the relevant album is speaking to thousands across the globe due to the current state of the world.

Led by leading singles ‘Becoming Human’ and ‘The Universe Indie of Me’, this album is one of those releases that needs constant plays to fully experience it’s journey. A rollercoaster ride through elements of nostalgic prog, there’s nudges to artists such as Vangelis, Genesis, Peter Gabriel and Steven Wilson within the release, while still holding onto it’s authenticity. Commenting both on Simon’s personal feelings, the relatable album is something that can speak to many.

During these uneasy times for the globe, we’re left questioning what is real, and what it truly means to be a human. ‘Becoming Human’ requires your gaze and will captivate you into a realm of thought-provoking feelings. A true asset in the progressive world, Simon Collins could be as huge as his dad.