Kscope Music has been reissuing The Pineapple 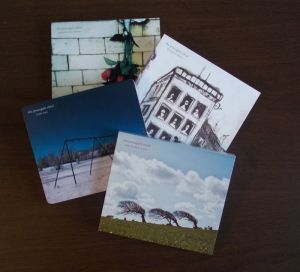 Thief’s albums beginning with their third, Variations on a Dream. With the recent release of their sixth, What We Have Sown, a wonderful back catalog is now available to those of us who missed them the first time around.

I happen to love Bruce Soord’s music, but there might be a “sameness” to it that can be frustrating to some prog fans. Soord’s compositional technique is very minimalist (in the same sense Philip Glass, Steve Reich, and Arvo Part are minimalist). For example, the song “Vapour Trails”, from Variations on a Dream, is nine minutes long, and the entire lyrics consist of

As the words are repeated over and over, they become part of the overall sound of the song, and small variations in the melody have a much greater impact. It takes patience to listen to a typical Pineapple Thief song, but it is definitely rewarding. Every song creates a sense of time being suspended, as endless permutations of the basic melody are worked out. Perhaps Soord is the Bach of prog, and his songs are fugues!

If you’ve never heard anything by The Pineapple Thief, a good place to start is the two-disc compilation, 3000 Days. Variations on a Dream (probably my favorite, with the amazing mini-suite “Part Zero”)  is Pineapple Thief at their most Radiohead-like. 10 Stories Down is more acoustic and lighter in feel.  Little Man is a heartbreakingly beautiful account of Soord’s loss of a child at birth.

What We Have Sown was initially released as a quickly-recorded farewell work for the Cyclops label just before The Pineapple Thief began its relationship with Kscope. Recorded in 8 days, it is a wonderful collection that features one of Soord’s finest songs, the 27-minute “What Have We Sown?” as well as the sinuous, Middle Eastern-flavored “Well, I Think That’s What You Said”. Kscope has tacked on two bonus tracks, making it an even better package than the original.

As a matter of fact, Kscope has done an excellent job with all four reissues. They come in attractive slipcases, and all have updated artwork. Variations on a Dream and 10 Stories Down each include a bonus disc of music that was originally given away in limited editions.

The Pineapple Thief represent a more contemplative side of prog, and based upon their latest release, All The Wars, they are still exploring new and exciting musical territory.