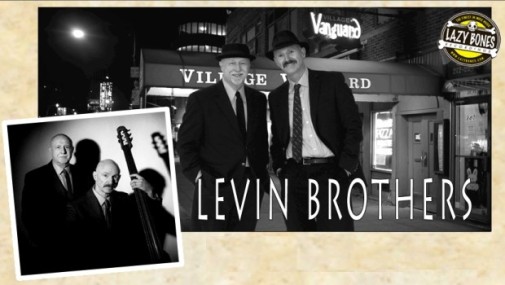 On September 9, renowned musicians (and brothers) Tony and Pete Levin released their first album together.  Although Tony is primarily a rocker and Pete primarily a jazz musician who has played with some rock bands, this album is strictly classic jazz.  Both brothers (and their supporting musicians) shine on this album, as Tony yet again amazes with his bass work and Pete does a wonderful job on piano and keys.  And what more would you expect from two classy Boston guys? My first impression after listening was how I wished I could be in a nightclub chatting with some pals enjoying music like this. The album just has that kind of atmosphere. While listening, you’ll probably be tempted to tap your feet and say, “Play it again, fellas.” I highly recommend this album for anyone who is interested in jazz, especially the classic jazz scene of the 1950s. There is a great mix of slow paced, relaxing piano driven songs and up tempo, sax and percussion driven pieces that will make you want to swing. Here are some of my favorites:

Bassics: the first song features the acclaimed drummer Steve Gadd, and this is primarily a bass and percussion driven track anchored by Gadd’s steady rhythms and Tony’s melodic bass

Havana: played with some Spanish flair and even features some scat singing

Gimme Some Scratch: saxophone (played with dexterity by Erik Lawrence), one of my favorite instruments, really shines on this song

If you’re searching for some classic jazz music from a classy group of guys (who also happen to be extraordinary musicians), then this is an album certainly worth adding to your collection. You can support the Levin Brothers by visiting their website: http://thelevinbrothers.com 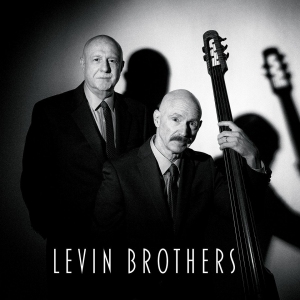 Interview conducted via e-mail and reproduced below.

1. First of all, we at Progarchy would like to thank you for this opportunity. Many of us are big fans of King Crimson, Peter Gabriel, Pink Floyd, etc. We know you have a busy schedule, so I’ll keep the questions to a minimum. The 1950s was obviously a huge decade for jazz, featuring the talents of Miles Davis, Buddy Rich, and others of the cool jazz movement. What first attracted you to the jazz scene and do you have a preferred “style”?

It’s an interesting combination, me and Pete, because I’m primarily a rock player, who also plays jazz – while he’s a jazz player, who has played a lot of rock. So, Pete’s played in lots of jazz styles, on tons of records and tours. For me, I’m usually called in to a jazz album when they want it to be more like rock(!) But this time it’s us calling the shots, and we wanted to go back to the style we loved when we were kids just starting to play… the ‘cool jazz’ then may or may not have been ‘cool’, but it had melodic songs, and the solos weren’t as long winded as some other styles. In general it seemed less designed for the players, and more about having good writing, played well. So that’s what we aimed at with this album, hopefully giving the listener songs that’ll keep running thru their heads, and hopefully it’s music that has a classic element, and will sound as good 10 years from now as it does today.

2. What was the music scene like growing up in the 1950s Boston area and how much of an influence did it have on the you and your brother’s playing style?

When I was living in Boston I was only into Classical. There were great opportunities, and the Greater Boston Youth Symphony Orchestra took me to Carnegie Hall and the White House. But it was after I left to go to school in Rochester that I started playing jazz and rock — so I wasn’t much influenced by what was going on at home.

3. This is your first time releasing an album with your brother Pete, an accomplished musician in his own right. Why so long a wait? What was the experience like?

We did release a single track way back years ago, and it was a comedy piece! Otherwise, we’ve played on each others albums and projects many times, but really this is the first time we sat down and said, let’s make this album together. Surprising it took us that many years to do it. (And hopefully it’s worth the wait!)

4. Listening to the audio sample on Youtube, I was impressed by the quality musicianship, but it was certainly unlike anything most of your fans have heard before. Most listeners are familiar with your work with Peter Gabriel and King Crimson. What can they expect from the Levin Brothers album?

Oh this is different for sure. What it’s about is; nice jazz songs, played well, with unusual instrumentation (a lot of my cello playing the lead, as well as Pete’s piano and organ, and Erik’s sax). The solos are short and each guy does his best playing, then moves on for somebody else.
Oh, there is one King Crimson song, Matte Kudasai, that we included so that folks might have one song they already know.

5. I also noticed from the Levin Brothers site that Steve Gadd, one of the world’s most renowned drummers, is featured as a guest on two songs. However, a few other musicians, perhaps not as well known, appear on the album. Could you briefly discuss the talents of Jeff Siegel, David Spinozza, and Erik Lawrence?

Jeff and Erik are great players that Pete has gigged with a lot though the years. Guitarist David Spinozza has been in a jazz band with me, called L’Image, for … well, ever since I can remember — we don’t do much touring or recording, but there’s a good musical comraderie, so he seemed the right guy to bring in. You’re right about Steve Gadd being renowned, and it was important to me to have him on the track “Bassics”, because he was instrumental in making me a jazz player, back in the 60’s when we were in music school together. So it just seemed right to have him on that piece, which is mostly bass playing the lead, with drums sharing the spotlight.

6. This album is a dramatic shift from your typical role in a progressive rock band. As you continue to play for prog rockers such as King Crimson and Peter Gabriel, do you see yourself continuing to work on more jazz related projects in the future?

I never have much idea what the future will bring, but my plan is to continue with Crimson and Gabriel, but Pete and I will not only continue to do the local gigging we’ve always done – we will certainly take the band from the album out on tour sometime in the next year.

7. How did the songwriting process go? I noticed all but one song (Matte Kudasai) is an original composition. Whose specific influence (if any) can we hear on this album?

Pete and I both wrote songs for it – once the style was set (and I was very focussed on the albums of Julius Watkins and Oscar Pettiford) it was fun coming up with songs. We wrote more than we needed for the album, but also we kept the tracks short, on both the CD and LP, so we could fit many more songs on than is usual.
Incidentally, it was a longtime wish of mine to release a real vinyl album, and this was surely the right time for it – so we’re loving having the big artwork and vintage back cover on the vinyl version. Of course, as is standard nowadays, it comes with a download card for digital versions of all the songs.

8. Finally, do you plan on doing any touring once the album is released. I understand King Crimson is about to go on tour again, but will fans be treated to any live performances by the Levin Brothers in the near future?

Yes, as I mentioned before, I’ve got some Crimson and Gabriel tours to do this Fall, but next year we’ll also do some Levin Brothers jazz club dates for sure.

Best of luck on this album Tony and Pete. And one more question, if you don’t mind. A few of my fellow Progarchists (myself included) were wondering: where and when did you pick up the Chapman Stick? 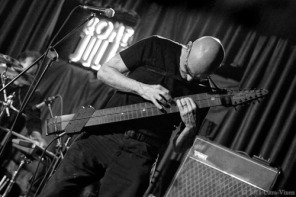 Thanks, Connor. The Chapman Stick appealed to me as soon as I heard it, as a way to play my bass parts in a different way than normal. In prog music, I’m usually looking for those subtle things that move my playing forward. I never imagined, in my first years with the instrument, that I’d eventually play the guitar strings on it too, and form a group (“Stick Men”) that I now tour with more than any other group. It’s been a really rewarding experience for me.

For more information regarding the album: