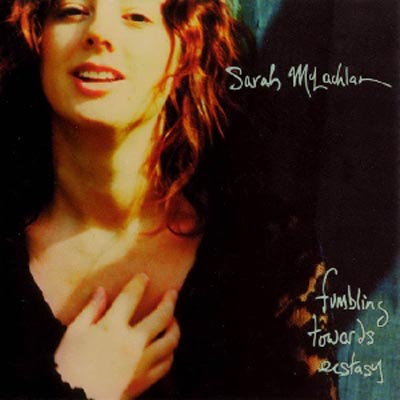 Sarah McLachlan, Fumbling Towards Ecstasy (1993).  I can’t explain why this album means so much to me, but it does.  I love McLachlan’s voice and her very effective use of hammond organ as well as her Talk Talk-esque atmospherics.

While the album as a whole has a very pop feel, especially after the much more experimental and minimalist first two albums (Touch and Solace), it still holds together brilliantly.  Even 19 years later.

The second half of Fumbling Toward Ecstasy is especially powerful.  In particular, the best songs are the searching “Ice,” the driving “Hold On,” and the whimsical “Ice Cream.”  Really, when one puts the song writing together with the production, one can only reasonably cry “genius.”  Then, if you add “Fear” to this, there’s really nothing to do but drop one’s jaw.  “Fear” is, simply put, one of the finest songs ever written.  Every aspect of it is perfection defined.  Words, meaning, arrangement, production.  I might go so far as to argue this is the single best “pop” song ever written–and, yes, I’m not forgetting the Beatles.  The Beatles never captured this depth of meaning or intent.

And, importantly, Fumbling lacks the nasty anti-religious cant of her middle work (I’m not a purist about this, by any means, as Rush is one of my favorite bands; I can only take in your face skepticism a little more than I can take in your face evangelicalism).  Her followup albums, especially Surfacing and Afterglow, are not only are weak lyrically, they’re weak musically, ranging into pure sap at times.  “Angel” embodies the worst of McLachlan, though I’m sure she made an absolute mint on it.

Her latest album, Laws of Illusion, while not nearly as sappy or poppish as her middle work, is also not as interesting as her earliest work.  Frankly, I hope McLachlan follows other serious pop artists such as Natalie Merchant, going into the more artistic realm rather than the more commercial.  I assume she no longer needs the money to be commercial?   Her voice could fit so perfectly in more experimental venues.

When I worked at the Organization of American Historians in graduate school, we would play all three of the first cds as we played Quake on the network (after business hours, of course).  What a contrast.  Yet, it worked.  That, or we were all a little schizophrenic.  Ok, let’s take this line of reasoning no further.

Believe it or not, I’ve seen McLachlan as many times in concert as I’ve seen Rush.  Each performance is a delight.  Indeed, she’s as good as anyone I’ve ever seen live.  She completely throws herself into every performance.  I very hope she will do the same with her forthcoming album.

2 thoughts on “Mini-review: Fumbling Toward Sarah”