Citizens of Hope and Glory: The Story of Progressive Rock (Amberley Publishing, 2012) by Stephen Lambe

Ten years ago, my wife and I had the pleasure of spending a day in Belize as part of a week-long Caribbean cruise. Our tour guide, oddly enough, was from Germany; he and his family had moved to Belize some twenty years prior. I’ve never been a tour guide, but I assume it 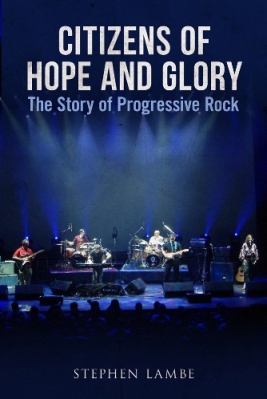 must be challenging in many ways: dealing with difficult and clueless tourists, recounting the same information again and again, trying to find the right combination of being informative and entertaining, and being the leader of the tour while not making the tour about yourself, but about the country, the culture, and the sites. This tour guide was exceptional: he was informative and detailed without being obsessive about every nook and cranny; he had a passion for his adopted homeland but also a knowing sense of objectivity; he mixed together trivia and humor and history with ease; he helped us experience Belize with the knowledge that we were in capable hands. It made for a delightful day.

Stephen Lambe, author of the recently published book, Citizens of Hope and Glory: The Story of Progressive Rock, reminds me of that tour guide. Now fifty years old, Lambe is something of a late-comer to prog, although he states so with a certain British dryness. He begins with with a wink and wry sigh: “To my constant irritation, I missed it. I was born in 1962, so by the time I had had my Prog epiphany in 1978 it was all over.” Only two sentences in and you have a nice phrase to insert into your next musical conversation: “Prog epiphany”. Lambe recounts how hearing the 1971 Yes album, Fragile, “blew my mind”; that was in 1978, as punk was rudely clawing and pawing its way onto the musical throne, albeit briefly.

And so the tour begins, with Lambe making it quite clear from the start what he hopes to accomplish—and what he will not try to do, for this or that good reason. It’s a small thing, but also significant. Having written a couple of books myself (and trying to finish a couple more at the moment), I think certain books—especially non-fiction works intended to educate and inform on a particular topic—should state from the start what they will and will not do. Lambe’s book is the third book I’ve bought that is dedicated solely to prog music. And, without naming the other two, I’ll simply note that this is the first of the three to be straight up about what the reader will find between the covers. (The other two are collections of essays, and are more academic in tone; they are mixed bags at best.)

What parameters does Lambe set? First, he focuses mostly on “symphonic” prog groups, with some mention of progressive metal, electronic music, and certain pop/rock groups, such as Talk Talk, XTC, Kate Bush, Tears for Fears, Elbow, and Radiohead, that have embraced many elements of prog without themselves being or becoming prog. Secondly, Lambe uses almost no quotes from either musicians or other publications. “I have chosen”, he states, “to make this book a personal history … in the hope that my experience and opinions will strike a chord with other fans of the genre. This book contains fact and opinion. … In the end this is a history of Progressive Rock filtered through my own tastes and experiences and I hope it is all the better for that.”

Some readers might be put off by such a statement, and I can appreciate their concerns. Lambe the tourist guide has spent over thirty years living in the land of Prog, and he has definite opinions about the sights and sounds therein. Personally, I like the approach. It reminds me of the similar tack taken by the exceptional American music critic, Will Friedwald (just a year old than Lambe, by the way), whose books on Sinatra and other popular and jazz singers from the early and mid-twentieth century are opinionated, informative, occasional quirky, often humorous, and never dull. Granted, Lambe is not the writer Friedwald is—but few people are. But Lambe, like Friedwald, is both knowledgeable and reasonable; he has his preferences, but he never pontificates, lambasts, or chides. On the contrary, he is agreeably positive; his occasional criticisms are almost always along the lines of noting that Album B is simply not quite as good as Album A by the same artist—and here are some reasons why.

Third, Lambe points out that since he is English, he tends to focus on artists from the UK, especially when he writes about the 1970s. Fair enough, especially since England in the 1970s was the center of the prog universe. The book is a chronological history; it does not try to be cute and jump around needlessly. Over the course of the book’s ten chapters, Lambe highlights about sixty essential prog albums, what he calls “pivotal albums”. These are not necessarily the “best” prog albums, he takes pains to note, but are a good, solid start to any prog library. Groups that receive substantial attention from the ’70s include Yes, Genesis, King Crimson, Gentle Giant, and Emerson, Lake and Palmer. Later groups include Marillion, The Enid, Twelfth Night, Rush, Magnum, Dream Theater, and Porcupine Tree, among many others. Due attention is given to American and European bands, including groups from Poland, Italy, and Germany.

Lambe is at his best when he makes connections, highlights influences, shares his personal experiences, and places bands and albums within both immediate and larger contexts. Here is a good example of his approach, about halfway into the book, in the chapter, “The 1980s: A Short-Lived Revival”:

Much more of a surprise than the last gasp of Yes was the seemingly sudden emergence of King Crimson. Towards the end of the 1970s, Robert Fripp had been increasingly active. This included an excellent solo album, Exposure, and work with Daryll Hall, Peter Gabriel and his own band, The League of Gentlemen. Working largely in the USA, he had managed to re-invent himself as a pioneer of the New Wave rather than a Progressive Rock dinosaur. In 1980, he set about forming a new band.

This time, Fripp had a different style of music in mind, something informed by the post-punk pop of Talking Heads (from which band he stole innovative guitarist and vocalist Adrian Belew), the intricate minimalism of Steve Reich and the rhythmic complexity of the old King Crimson. With a rhythm section comprising Tony Levin (on bass and the strange Chapman Stick) and Bill Bruford (drums), the band began rehearsing in Britain before taking a short set on tour in small British venues. I caught this tour at Keele University and was very impressed, although despite playing Crimson classics ‘Red’ and ‘Larks Tongues in Aspic’, they had less an hour’s worth of material. They were called Disciples at that point, although it was no surprise when they changed their name to King Crimson.

The resultant album, with its striking, minimalist cover, is a masterwork. It mixes Talking Heads-style vocals and song structures with a Prog style that few people had heard before. Belew sounds like he is having a whale of a time, his vocals clearly heavily influenced by David Byrne of his former band, but his melodic sense superbly utilized. His inventive guitar playing dips in and out of Fripp’s more intricate patterns. Bruford and Levin sound like they were born to play this music, with Levin’s intricate and inventive Chapman Stick work particularly impressive. But Fripp was the boss, and his remarkable guitar patterns are what make Discipline so memorable.

Of the ten chapters, six are devoted to history, groups, and albums; the other four are about the important relationship between technology and prog, the various aspects of live performances, prog art and design, and the content of prog lyrics. I would have preferred, if push came to shove, for the latter four to have been grouped together as the second part of the book rather than be dispersed among the historical chapters, where they break up the narrative flow. As it was, I skimmed some of those four chapters; however, I’ve no doubt they will prove informative to readers interested in those specific topics, especially musicians, producers, and others actually involved in creating music. The Epilogue, “Darlings of the Press at Last?”, notes that “Progressive Rock is a specialist genre once again, with an aging audience. However, the success of Porcupine Tree, Dream Theater and Elbow should give us all hope. Wherever there are people are willing to put in a little work to get more than a catchy tune and a trite lyric out of music, then Progressive Rock, in some form, has some hope for survival.” I suspect that most of the contributors and readers of Progarchy.com agree completely.

Lambe’s book is, I think, a near perfect introduction to progressive rock for nearly anyone interested in the topic. Passionate, obsessive prog fans who have spent years reading and collecting and communicating may find it a bit “101” at times. But even they will likely appreciate how Lambe has put together a cohesive narrative that makes many connections and fills in many holes without losing sight of the forest for the trees. This is a tour worthy taking, with a very adept and enjoyable tour guide. Highly recommended.

5 thoughts on “Detailed review: “Citizens of Hope and Glory: The Story of Progressive Rock””