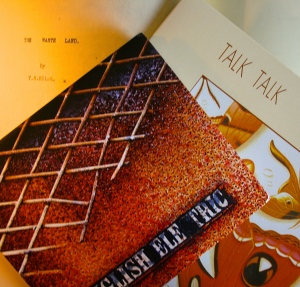 Years ago–maybe as many as 25 years ago–fellow Progarchist and classical musician Kevin McCormick and I vowed to listen to Talk Talk’s The Colour of Spring every April 5th, in honor of what is arguably the first post-rock track ever released, entitled, appropriately enough, “April 5.”  I’ve tried to live up to this agreement every year since, and I don’t think I’ve missed an April 5th listening yet.

Last year, before Progarchy even existed, I wrote a piece asking Mark Hollis to call his legitimate successor, Greg Spawton, and the members of Big Big Train.  I mean really.  Imagine Mark Hollis working with Spawton, Poole, NDV, Longdon, Manners, Gregory, and Aubrey.  What a match made in heaven.  After teasing Greg about this a few times, he admitted that if he ever runs into Hollis, he’ll invite him to join BBT.

But, back to Talk Talk.

Though I’d seen Talk Talk’s earlier pop songs/videos on MTV in the early to mid 1980s, I wasn’t taken with the group until I came across 1986’s “The Colour of Spring,” an album that, without much exaggeration, not only opened my eyes to artistic possibilities but also caused me to claim my second music obsession: first, Rush; second, Talk Talk and Mark Hollis.

Everything else I treasured at the time such as early Yes and early Genesis paled next to The Colour of Spring.  Please don’t get me wrong.  I still adored Yes and Genesis, and I always have and probably always will.  But, The Colour of Spring was something beyond.  Beyond rock.  Beyond prog.  I heard lots of Traffic and Spooky Tooth in it, but I also heard a lot of experimental jazz from the 1950s and 1960s.

This album, frankly, seemed like the best prog album since 1977’s Going For the One, but still bettering anything that had come before it.

I studied the art work of James Marsh–those brightly colored moths forming some kind of order as they hovered around droplets of water.  I listened repeatedly to the music.  Too many times over the past twenty-six years to count now.  And, I have dwelt lovingly over the lyrics, which have, in their own way, brought me so much comfort during the good and bad of my life as to rival my love of the words of T.S. Eliot and of St. John the Beloved.  When I first purchased the American version of The Colour of Spring, no lyrics came with it.  Part of Hollis’s charm is his ability to muffle his words in a mysterious but artistic fashion.  I had all kinds of ideas about what Hollis was singing, but I later found I was mostly wrong in my interpretation and translation of those words into song lyrics.

In March 1988, Kevin and I found a copy of the British release of the album in a London music shop.  There, on a brilliant spring day–I can still remember the sun streaming through the windows into that rather dark shop–I read the lyrics as Hollis had written them (even printed in his handwriting) for the first time.

I was, needless to write, emotionally overcome as my mouth dropped open and my eyes teared up.

The lyrics were far better than I’d imagined, in meaning and in form.  I shouldn’t have been in the least surprised.  Though, every listening from that point forward has meant more to me than each and any previous listening.  Only a few other albums in my life have stuck with me as long as has The Colour of Spring.  It has remained my gold standard, surpassed only by its immediate successor, The Spirit of Eden, and (finally–twenty-five years later) by Big Big Train’s English Electric vols. 1 and 2.

In every aspect of The Colour of Spring, Mark Hollis offered not only his genius, but his very being.  That is, he was the music, and music reflected him.  But, really, it did far more than reflect him.  Without trying to become too metaphysical, I must state, the music seems to be coming from somewhere beyond anything known in this world, with Hollis merely reflecting the Divine itself, but putting his own personality on what was given to him.  This is much like the way Tolkien claimed to have written his mythology–not as a creator, but as a discoverer and as a recorder.

Hollis expressed so much love of the world (its physical nature) and a profound respect for religion in interviews–along with his despising of the corporate media culture of the 1980s–that one can easily envision him in Rivendell, the Last Homely House, recording his work among the greatest artists of Middle-earth, lost somewhere in a timeless realm.  Or, more classically, Hollis’s love of the created order makes me wonder if he somehow heard (or felt) the revolving of the Platonic spheres.

Back in 1986, Hollis admitted in interviews that the concept behind the album and the theme were quite simple: religion is wonderful, and war is horrific.  An alliance of the two, however, makes for the worst of all possible worlds.  Ultimately, Hollis claimed, the lyrics reflect the ideals of “life and morality.”

Prog fans, take pride: The Colour of Spring was a concept, to be sure.

The aim of ‘The Colour of Spring,’ he explains ‘is to present great variety in terms of mood and arrangement, treating the whole thing as a concept.  An album shouldn’t be something from which a single is pulled, leaving the rest filled up with rubbish. [New Music Express, Feb. 22, 1986]

The theme, however, must be the only thing that was simple about the album.  Certainly not the actual lyrics, or its song structure, or its production, or, even, its reception.

The album took Hollis exactly one year and two days to write and record.  Having made an enormous sum of money with the first two Talk Talk albums, The Party’s Over (1982) and Life’s What You Make It (1984),  Hollis fulfilled his dreams of moving everything toward the real and organic, away from the synths of the previous albums, there only because he couldn’t afford to hire a rock ensemble.  Now, with The Colour of Spring, he could.

Interestingly enough, Hollis considered “It’s Getting Late in the Evening” to be the core of the album.  For those of you who know The Colour of Spring, you’re probably scratching your head, as this song didn’t make it onto the final cut, and appeared at the time only as a b-side.  Haunting to the extreme, “It’s Getting Late in the Evening,” presents an impressionistic look at American slaves discovering their freedom following the American Civil War.

The tide shall turn to shelter us from storm/The seas of charity shall overflow and bathe us all. 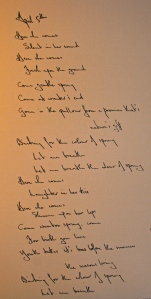 Today, though, we at Progarchy remember the last track of side one, “April 5,” perhaps the first post-rock, post-prog track ever released.  At only 5 minutes and 52 seconds, it is a masterpiece of meandering brevity, a creative breath of freedom and beauty, a reaching and striving as well as a reflection.

Thank you for everything, Mr. Hollis.  If you read this, I only request of you the same thing I requested of you a year ago.  Please call Mr. Spawton.  If you need his number or email, just let me know.

I dedicate this post to the genius and friendship of Greg Spawton.

7 thoughts on “Here She Comes, Laughter Upon Her Lips: Talk Talk’s 1986 Masterpiece”