Leeds-based Chris Wade is the man behind the band Dodson and Fogg and he sings, as well as playing guitars, bass, keyboards, percussion and flute. He’s enlisted the help of Celia Humphris (Trees) on vocals on seven of the tracks, and Alison O’Donnell (Mellow Candle) on one, as well as Nik Turner (Hawkwind) on flute, Colin Jones on trumpet and Amanda Votta on flute.
“That’s a lot of flutes”, I hear you say and whilst other reviewers have mentioned Jethro Tull don’t be expecting any standing on one leg frenzied flute action.
I have, over the past 9 months or so, become increasingly disillusioned with much of what passes for ‘progressive’ rock music nowadays.
What I have found refreshing, though, are bands like Dodson and Fogg, These Curious Thoughts, KingBathmat and echolyn to name a few who are making truly original music, without seeing the need to clog the soundstage up with unnecessary instrumentation, over-production or Pro-toolery. The songs are given room to breathe, the melodies become all important and sometimes it’s the gaps between the instruments that are truly spectacular, aurally.
The debut, and this second album have been garnering lots of positive reviews, and Chris was recently interviewed by the Classic Rock Society. There he mentioned his influences were Leonard Cohen, early Cat Stevens, Simon and Garfunkel, really early Jethro Tull. His favourite songwriter, though, is Ray Davies and there’s a quintessential Englishness (have a listen to Too Bright) to this record that reflects that I think.
I love how no song ever outstays its welcome, how the vocals and lyrics support the tune, and not the other way round, and how every bit of instrumentation, be it trumpet, flute, acoustic or electric guitar is almost perfectly placed. Record and mix it any other way and it loses its beauty, its fragility, its inner core. It is, dare I say it, art. Art that serves no purpose other than to be art.
But what I love more than anything are the electric guitar sounds this young man creates. The trumpet on What Goes Around is pretty special too, as is the acoustic guitar and trumpet on Too Bright (early Tull, anyone?) but I digress. Guitar-wise, check out Can’t Hold Me Down and Too Bright for example. I get very, very early Buck Dharma, in both Stalk Forrest Group and Blue Öyster Cult incarnations. Lovely, psychedelic, sparse guitar runs, or flourishes, even notes that make me at least beam from ear to ear. It’s To The Sea where the guitar lets rip though, albeit in a very restrained, beautiful way. Notes, chords of electric guitar duet with strummed acoustic as the song gathers pace, wanting to break lose but resisting the temptation. The prog equivalent of tantric sex methinks. It’s a staggering piece of music. And I’m spent. 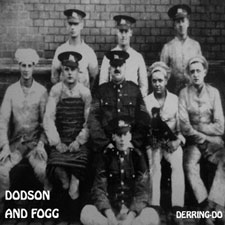